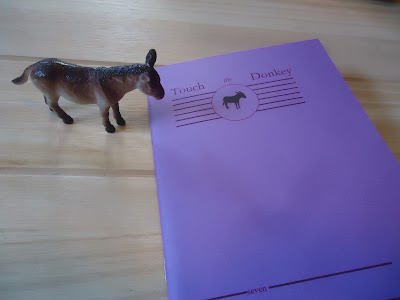 Valerie Coulton’s chapbook, small bed & field guide, was recently published by above/ground press. Previous books are open book, The Cellar Dreamer, passing world pictures (all from Apogee Press), and the lily book (San Francisco State University Press). Her work has appeared in New American Writing, Front Porch, kadar koli, Fourteen Hills, Parthenon West Review, and e-poema, among other periodicals. She lives in Barcelona with the poet Edward Smallfield and is one of the editors of parentheses, a multi-lingual journal of poetry and fiction.

She has eight untitled poems in the seventeenth issue of Touch the Donkey.

Q: Tell me about these eight untitled poems.

A: These have a few things going on: mostly written in summer, experimenting with letting different kinds of language come in, and also meditating a bit on my dad.

Q: Is the suite of poems larger than the eight collected here?

A: Yes, there are more or less 30 pieces in the series.

Q: How is such a suite composed? Do you start at the beginning and move in a linear fashion, or do you begin in the middle and move outwards?

A: That’s a good question. Right now, the pieces are in the order they were written in, and that usually seems to hold for me, but when a series feels truly finished, there could be some movement.

A: This project continues, so it’s always there as a possibility for writing, or a home for a new piece. And knowing that means that completely other pieces or projects can emerge. I like the comfort of something ongoing.

Q: Well, as Ondaatje paraphrased Spicer, the poems “cannot live alone any more than we can […].” Is this something you find in your work? Are poems usually composed as part of a larger structure? Is there such a creature as a single, orphaned, unconnected poem?

A: That’s an interesting question. My impulse is to say yes, but at the same time I generally feel that my poems are connected to each other, either by an explicit project or an implicit set of concerns. Work of a time often seems, in retrospect, to share elements. Also, I tend to shy away from wanting my poems to feel absolutely resolved. I do write some that have this quality, but when revising I often try to disrupt the resolution. Poems of a project sometimes appear to me as pieces or fragments of tile from a mosaic: each one should be interesting on its own but contribute to a greater whole.

Q: Where did this impulse come from? Might this suggest that, through your multiple book-length and chapbook-length projects, you are writing a singular, loosely-interconnected, work?

A: There’s a part of my work that could definitely be considered instalments of one long project. There are other series, though, that are linguistically different and seem to me to come from another kind of source; it would be interesting to reconsider them and how they do interconnect.

Q: If your work might be considered all part of a singular, interconnected project, how would you see your collaborative work fitting into that? Are you extending your reach, or working entirely outside?

A: I usually collaborate with my husband and favorite poet, Edward Smallfield. As he is always inside everything I write, and my primary reader, working with him is a natural extension.

Q: What do you feel you are able to accomplish with collaborative work that you aren’t able to with your individual work, and vice versa?

A: In my own work, I’m able to enter a world that is “mine” but which I’m not fully conscious of. In collaboration, I appreciate the sense and respond element, a sense of improvisation together, and of coming up with something beyond what I could do alone.

Q: After four full-length collections and a handful of chapbooks, how do you feel your work has developed? Where do you see your work headed?

A: I think I’m more accepting now, in the sense that I can allow more things to happen, and to remain, than I might have in the past. I trust my intuition more. I used to be concerned with occluding, encoding and erasing. Now I’m interested in layers of time and how to give them their voices. I don’t know where my work is headed, but I feel enormously grateful to be writing and living with Edward, and to have support for my writing from you and others. Just being able to do it is everything.

Q: Have you any writers or works in mind when you begin to construct new work? How do chapbooks or books get formed? Are the processes different at all?

A: I’m generally inspired by other writers and works, they’re often a departure point or present in some way in a project. Book sections have come from reading Lorine Niedecker and Borges, for example. For me the book and chapbook processes are similar: keep adding pieces to a series until it feels done.

A: Sometimes yes, but usually as a section of a multi-section work.

Q: How early might the size and shape of a particular project make itself known?

A: Usually not until I’m getting pretty close to the end.

Q: Finally: you already mentioned Niedecker and Borges, but who do you read to reenergize your own work? What particular works can’t you help but return to?

A: Fortunately, I live with my favorite writer, so I have a constant source of inspiration. I also get very energized by other writers I know; seeing their new work often sparks something for me. From the bookshelf, Archilochos and Niedecker are always there...