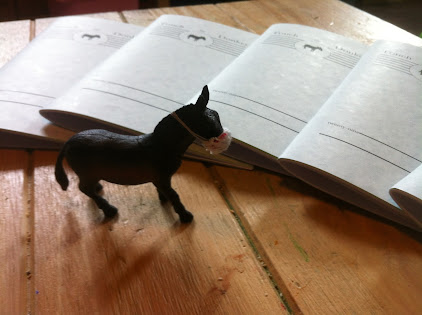 Bill Carty is the author of Huge Cloudy (Octopus Books). He has received poetry fellowships from the Fine Arts Work Center in Provincetown, Artist Trust, Hugo House, and Jack Straw. He was awarded the Emily Dickinson Award from the Poetry Society of America, and his poems have recently appeared in jubilat, Denver Quarterly, Paperbag, and other journals. Originally from coastal Maine, Bill now lives in Seattle, where he is Senior Editor at Poetry Northwest. He teaches at the Hugo House, the UW Robinson Center for Young Scholars, and Edmonds College. www.billcarty.com

His poems “THE DISTANCE” and “OLD MACHINE” appear in the twenty-ninth issue of Touch the Donkey.

Q: Tell me about “THE DISTANCE” and “OLD MACHINE.”

A: “Old Machine” is the older of the two poems, and I believe it started as many of my poems do (or did, before quarantine made “overhearing” less of a thing), with a bit of eavesdropped language, someone speaking of their “aunt in Acton.” From there, I grabbed some things from observation (a hardware store that had an employee sit out front with quarters, paying the meters for customers) and a little from experience (RIP to the Brown Bag in Rockland, Maine, where I washed dishes in high school).

I’m a little less clear where “The Distance” originated, besides that I almost certainly wrote it on the Notes app on my phone last fall. I think one inspiration was the general sense that I can never really find something unless I’ve committed to it being lost forever. Like the “gift card for the fish shop”—it’s recovery in the poem is pure fantasy. Never did find that thing.

A: I’ve spent a lot of time in the last couple of years revising a few long sequences of poems. I think, perhaps as a break from those poems, I’ve filled in much of the interim with shorter poems, like these two. So in that sense they fit with some of the poems I’ve been writing recently. I think they also include, especially in “Old Machine,” a narrative element that’s more typically of the book I’ve been working on.

Q: You mention weaving in bits of “eavesdropped language.” What is it about this particular kind of prompt that appeals? And what have you been using, if anything, as replacement since lockdown?

A: I think what appeals to me about that type of language is the opportunity it provides, once integrated into a poem, to push the writing into unexpected places. In his book of lectures, The Lives of Poems, Joshua Beckman recounts a short anecdote about Bashō, saying that he “used to slip a poem into the conversation and if it went unnoticed it was a success.” In the process of writing, I often challenge myself to pull from what I’ve read, heard, or observed, and try to bring these different sources together cohesively.

I can think of a few poems in my first book, Huge Cloudy, that owe large debts to the words/worlds suggested by passing strangers. During the pandemic, absent these ideas, I’ve been relying a bit more on a combination of reading and returning to older notes for poems that I’ve compiled. In a sense, things that I’ve written myself offhandedly (whether months or years ago) can often have the feeling of coming from another source too.

Q: With a full-length collection in print, as well as your current works-in-progress, how do you feel your work has developed? What do you see yourself working towards?

A: I’m currently in the position of finishing up a second manuscript, We Sailed on the Lake, which is (I’d guess) about three-quarters complete. Most of this book consists of the long poems/sequences I mentioned earlier, many of which predate my last book, so in some ways I’d say my new writing is a continuation of what came before. One of the new, long poems actually “overlaps” with the last poem in Huge Cloudy, which I think speaks to some desire on my part to create conversation from one book to the next.

With that said, I’m not sure I see myself working toward anything specific. There are some questions I have in mind as I work on the new book—in terms of structuring a book around longer poems, around different ways of approaching the “we” in the title—that I have in mind when I’m drafting. I have some faith in these things being fleshed out through the writing process, without trying to impose particular goals on the poems themselves.

Q: Is there a difference in the way you’re approaching the individual poem, as well as the process of compiling a manuscript, now that you’ve already published a book? Is this process similar to that of when you compiled Huge Cloudy?

A: I think that my approach to the individual poem is similar, but it has become a little more drawn out. I think this is partly due to being busy with editing, parenting, and teaching responsibilities over the last year or two, but I also think that it’s the product of putting a little less pressure on myself and taking more time to finish the individual poems.

Huge Cloudy consists more wholly of individual poems (or serial poems in sections), and so there were more discrete poems that I was trying to fit together. With the new book, I’m often trying to fill the spaces among the long poems, and experimenting with what works best. Recently, I’ve been thinking of these short poems as opportunities to magnify moments, ideas, and fragments of language from within the larger poems that bear further investigation.

I noticed, for example, my propensity to use “some” as a determiner (or maybe an indeterminer?) before nouns. I noticed that the epigraph to the book (from Shakespeare: “In the night, imagining some fear, / How easy is a bush supposed a bear!”) includes this as well, and so that struck me as the type of thing that I should investigate, if not “correct.”

Q: You almost make it sound as though the longer poems in this work-in-progress exist as the main action of the manuscript, with the shorter poems existing as asides, akin to elements of Shakepeare’s plays. Do you see Shakespeare as an influence upon your work?

A: I wouldn’t have immediately listed Shakespeare as an influence, but as I think about it, it’s hard to deny the effect the language of the plays has had on me. (And I was recently reminded of this in quarantine, rewatching Slings and Arrows for the third or fourth time.) I would say that particularly in high school, Shakespeare was, by and large, the only “poetry” that was taught regularly or with any depth. Since then, I’ve taught Hamlet and King Lear multiple times in composition classes, and through this repetition, I find that lines from these plays pop into my mind with much more regularity than lines of poetry.

Q: Slings and Arrows really is magnificent, isn’t it? Are there any other elements you’ve seen appear, unexpectedly, throughout your work? It leads to the question: how do your poems begin, and how do they develop? How do they get built?

A: It is a great show! One of my favorites. I’ve actually been thinking about how my poems develop recently, and I think one common pattern is that a piece of language becomes embedded in a geographic place. As I alluded to earlier, a lot of my poems begin for me in overheard or discovered language. And I think what happens after I discover this language is that I begin to ascribe this language, or a pattern of language derived from it, to a specific place. In recent examples, I can think of poems where phrases inspired by my reading lead me to a memory (real or imagined) rooted in, say, a room in my house, a bar in Seattle, or the mudflats beneath a railroad bridge in my hometown. Once the inciting language attaches itself to a particular place, that’s when the poems begin to (imaginatively) travel and reveal themselves.

Q: And finally, who do you read to reenergize your own work? What particular works can’t you help but return to?

A: I’m not sure this is true all the time, but recently, because my poetry reading has been fairly peripatetic, I’ve been reading prose to reenergize my writing. I think this happens first on the level of the sentence—and I’ve found the writing of Annie Ernaux, Henry James, Jenny Erpenbeck, and Toni Morrison particularly compelling in this regard. At other times, I think I’m reading nonfiction prose in areas like history or economics as a way to expand the vocabulary of my writing—not in terms of new words, necessarily, but situating familiar phrases in new contexts.