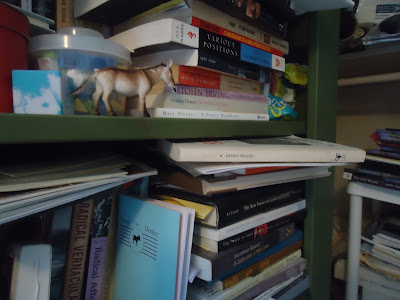 Rae Armantrout has published 13 books of poetry. Her most recent are Partly: New and Selected Poems and Entanglements (a chapbook of poems in conversation with physics), both from Wesleyan University Press. She has retired from UC San Diego and is now living in the Seattle area.

Her poems “CONTINGENCIES” and “HIDDEN” appear in the nineteenth issue of Touch the Donkey.

Q: Tell me about the poems “CONTINGENCIES” and “HIDDEN.”

A: In Contingencies an interest in the history of words intersects with observations of the present. I had recently looked up the etymology of the word “contingent” when I saw the two (perhaps homeless) women resting at tables in a supermarket deli. That caused me to look up the history of “askance.” Then, well, I imagine you’ve the story the last section is based on. I saw it in the NY Times. Smart toys now elicit data from children who play with them. I guess someone might also say that the parts of the poem are in one sense or the other “contingent.”

It’s a bit harder to talk about Hidden. I’m always afraid I’m saying too much. The first section comes from having moved north from San Diego to the Seattle area. Seattle may be mild compared to where you live, but it does have an actual fall when the deciduous trees turn colors and drop their leaves. I’ve never lived in a place where that happened! Several trees turn red first on one side or maybe on the top but not the bottom. The second part is more mysterious and I left it that way on purpose. I’ll just say that we moved to this area to help take care of our new twin granddaughters who are now 12 months old. It was interesting to see them begin to relate to each other. If we were around, they would react to us but, if we were out of the way (or out of sight), they had their own ways of communicating. I don’t know how people read the poem when they don’t have that image in mind. I could have told that whole story, but that would have been something else.

A: These poems are from a finished manuscript called End Quote. I think my work is pretty consistent, though each book has its own character since each book grows out of inevitably changing personal and social circumstances. Of course, I have some long-term interests and habits of thought. I’m often preoccupied by the limits of knowledge and by the various ways we deceive ourselves or are deceived. My interest in science comes from that, I think.  But my poems also tend to incorporate whatever I happen to see or hear in the world around me at the moment. For instance, the Trump presidency and the disasters brought on by climate change are factors in both Wobble, which is coming out in September, and in End Quote. I think Wobble may be a particularly dark book. The poems in End Quote respond to the toxicity of these time, but are also affected by the experience of caring for two fresh faced babies once or twice a week. “Hidden” is partly a response to watching the twins, who were around 8 months old at the time, beginning to communicate with one another in a way that we adults couldn’t understand and which, in fact, the babies would discontinue any time an adult was visible.

Q: You give the impressions that your books grow organically, but very much sequentially, as well. Is this something that evolved naturally, or was this deliberate? Is there ever overlap between the composition of poetry manuscripts?

A: Hmm. When I started collecting work for my first book, way back in the 70s, I was a very slow writer. I mean seven years passed between the publication of my first quite slim volume, Extremities, and my next, Precedence. (In between I did publish the chapbook The Invention of Hunger.) The idea that I could write enough to have multiple unpublished mss. sitting around would have been really alien to me back then. For various reasons, I write more now. I have more time on my hands, but I am also conscious of having less time remaining, I suppose. Then and now, I collect poems in what has become an old-fashioned black thesis binder. This allows me to order and reorder the poems as I’m working on a manuscript. The process is intuitive. I have some sense of how one poem affects the next, as I do of how one stanza affects the next in an individual poem. Since I seem to be writing more quickly these days, it does happen that the manuscripts overlap at the edges. There will be a period of time during which what I write could go into either a nearly finished book or one I’m just starting. In that case, I hope to identify a new tone or concern in some of the poems and separate them out to be the start of something new. Things have changed, actually, since I answered your last question. Now I no longer consider End Quote finished. I plan to work on it for the rest of the year. Some of the poems I write between now and then will go into it and some will be part of a new ms. I made this decision partly because I think my books are coming a bit too quickly lately and partly because I still seem to be writing what I think of as “End Quote” poems. This ms. seems to focus both on natural growth and development (for instance, the babies) and the general toxicity of the world.

Q. Is this something you’ve done before? Returning to a work you had previously seen as complete?

A. Yes. Although something a bit similar happened when I was writing Versed. For a while that book was two different manuscripts. The section called Versed ended with poems written in the summer of 2006 when I found out I had cancer. Before I had surgery, I mailed it off to my publisher. So I thought the poems I wrote after I came home from the hospital and was undergoing treatment were part of something new. The more I wrote though, the more I saw continuities between the two mss. I decided they belonged together after all. I worked on that book for two more years. All that time I expected my cancer would return and that would be the natural end of the book (and my life). But it didn’t happen. Finally, I realized that as long as I was working on Dark Matter, I would be writing in the shadow of cancer. That’s when I knew it was finished.

Q. You’ve had two volumes of selected poems published to date. Does that change the way you view your writing, and the trajectory of your body of work?

A. The first selected, Veil, brought together books done with small presses, some of which were out of print. It was my first book on Wesleyan – and by far the longest book I had ever published. It felt substantial. The second selected, Partly, came out recently, in 2016. I don’t feel as if it changed anything really. I guess I hoped some people who hadn’t been reading me might find it a handy way to get into my work.  I called it Partly because I didn’t want to jinx myself. I didn’t want it to seem like a final summary.

Q. Who do you read to reenergize your work? What particular works can’t you help but return to?

A. In terms of poetry, Emily Dickinson, William Carlos Williams, Ron Silliman, Lyn Hejinian. But more often, when I feel stuck, I read non-fiction that I suspect will engage my imagination. I went through a long period in which that most often meant reading books about quantum physics by people like Brian Greene, Brian Cox, Carlo Rovelli. But I’m also, increasingly now, interested in reading about cognitive science, neurology, AI research, etc. I also read a couple of books by the biochemist Nick Lane that got me going. I like reading things that are mind boggling, that raise many more questions (at least for me) than they answer. I can take those questions and run with them.