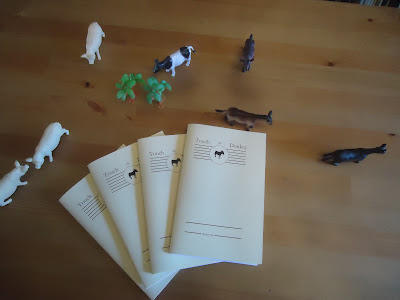 Conyer Clayton is an Ottawa based artist who aims to live with compassion, gratitude, and awe. Her most recent chapbooks are: Undergrowth (bird, buried press), Mitosis (In/Words Magazine and Press), For the Birds. For the Humans. (battleaxe press) and Trust Only the Beasts in the Water (above/ground press). She released a collaborative album with Nathanael Larochette, If the river stood still, in August 2018. Her work appears in ARC, Prairie Fire, The Fiddlehead, The Maynard, Puddles of Sky Press, TRAIN, and others. She won Arc's 2017 Diana Brebner Prize, 3rd place in Prairie Fire's 2017 Poetry Contest, and honourable mention in The Fiddlehead's 2018 poetry prize. She is a member of the sound poetry ensemble Quatuor Gualuor, and writes reviews for Canthius. Her debut full length collection of poetry is forthcoming. Check out conyerclayton.com for updates on her endeavors.

Her poems “Realities,” “Visible Proof,” “Flood” and “Inclement” appear in the twenty-second issue of Touch the Donkey.

Q: Tell me about the poems “Realities,” “Visible Proof,” “Flood” and “Inclement.”

A: These poems are all from a manuscript I am working on of prose poems based on my dreams. Most of the first drafts are spoken into a voice memo app on my phone when I wake up in the middle of the night or early morning, or scratched down in my notebook while I drink coffee on the couch. On some, I’ve added little bits to amplify certain themes and moments of significance, but I really try to stay true to the emotion and mood of each dream.

I have a longtime interest in the realities of alternate states of consciousness aside from our waking one, and this manuscript is my attempt to bring weight to what I feel is often dismissed — weird and seemingly random dreams. There is something to be learned from the places our Self travels when our waking intellect is shut down, and that is what I am leaning into in these poems.

Q: How does this project compare to some of the other work you’ve been doing lately?

A: It is certainly some of the most focused/confined work I am producing right now, as far as direction and form go. Usually my creative process is very unplanned. I tend to lean away from constraints, but given the wild nature of dreams, I think that constraint is necessary for this project. I have another prose poem project on the go as well, but it has a more narrative lean. Quite a different feel, but I am apparently interested in exploring what prose poetry has to offer these days.

I am deep into the editing process on 2 full length manuscripts (one of which, We Shed Our Skin Like Dynamite, is forthcoming with Guernica Editions in Spring 2020! My debut! Eek!). Much of my time has been going to that rather than writing new poems. During the nitpicking of the editing process, these dream poems have been a much needed retreat. The freedom of their content and inception is what has been keeping me sane and balanced in the midst of obsessing over commas.

Neither of my prose poem projects are autobiographical, and that is a first for me. All of my chapbooks and both of the full lengths I am working on are intensely so. I had a lot of things to work through in my past by way of my writing. Perhaps now there is some room in my psyche to expand outside of my own lived experience, bodily and otherwise. I feel a bit less clogged.

Q: How has your process of putting together a manuscript evolved? Is there a particular way you assemble a manuscript, and has that shifted now that you’ve a forthcoming collection?

A: My process always involves sitting on the floor with all my poems spread out wildly around me. I need this physical part of the process. I can't wrap my head around a manuscript digitally. So, that has always been my first step (once I realize that most of the necessary poems exist, at least). I don’t think that will ever change.

From there, I require an editor. I tend to get stuck in chronology, and having someone from the outside give me feedback on the order of poems really helps me see the manuscript as a piece of art rather than pieces of my life. I think that this will change over time because (I said in the previous answer) I am writing work now that is not autobiographical. Martha Greenwald, my first university creative writing professor, has wonderfully reordered both of my full length manuscripts in their early stages. It was immensely helpful. My partner Nate has also been lovely and a huge help in this regard.

Working with a professional editor, Elana Woolf, on my forthcoming book has definitely changed how I approach a collection. She helped me realize how poems overlap, what poems, though they may not be the best stand-alone poem, are absolutely crucial for the manuscript as a whole (“hinge” poems is what she calls them, I believe), what poems to cut because another poem does it better, where to recognize gaps, etc. I have taken this experience working with her into the editing of my second full length. It really changed the way I work. I now recognize better when I need to add to a poem, or write a whole new one, or just trash it. I used to feel that if I added lines to a poem written years ago that it somehow detracted from the truth of the poem, as though the moment in which it was written is the only thing that matters. I now realize that while this may be true sometimes, it is certainly not true all of the time, and updating old poems in this way makes their truth feel more potent to me.

Q: What other authors and/or works sit in the back of your head when you write? How does a poem begin?

A: Honestly, I am not consciously thinking of anything at all when I write. But works that resonate with me across genres and stay in my subconscious are those that employ the magical and surreal alongside the real.

I find myself rereading poetry and short story collections by contemporaries like Kaveh Akbar, Carmen Maria Machado, Anjali Sachdeva, and Eleni Sikelianos. I also continually dive back into Leonora Carrington, Italo Calvino, Jorge Luis Borges, Virginia Woolf, H.D., John Berryman, and Frank Stanford. I try to read new things, but I wear down the spines on my favourites beyond repair.

Poems begin with the intention to root around inside myself. I always feel slightly transformed, for better or worse, once a first draft of a poem is down, and again once it is completed. All poems begin with a genuine feeling of curiosity.

Q: You speak of your current project as a manuscript of prose poems based on your dreams. What prompted you to write of your dreams, and why, specifically, through the prose poem?

A: I’ve always been interested in the ways our unconscious speaks to our conscious self through dreams and dream symbols, much in the same way poetry (and most art, generally speaking) speaks directly to our unconscious intuitively through symbolism, so the union of dream states and poetry seemed very natural to me. Dreams move with the same nonlinear and intuitive narrative push that all the best poetry does (for my personal tastes anyway). Writing my dreams in a log, or dictating them on my phone when I woke up over the past year, was/is an intentional practice of self-exploration and actualization. This union of our conscious and unconscious self is, in my humble opinion, some of the most important work we can do as humans, because this individuation and self-realization allows us to be the best versions of ourselves — to do good in the world, for ourselves and for others. I think this awareness is also the goal of truly resonant art. So, one day I realized that the goals of my dream analysis and my writing were one and the same, and that these logs were indeed poems, and that was that. I’ve kept at it in a more organized way since then. (Is it incredibly obvious that I am into Jungian dream philosophy?)

I am realizing as a write this that my previous assertion that this project is not autobiographical is directly in opposition to the philosophy I am espousing right now, so, hey, maybe it is autobiographical after all. I suppose I can claim it isn’t autobiographical in a strictly “lived” sense, though I would maintain that the experiences are “real.”

As for why I chose the prose poem: the physical blockiness is how dreams feel to me. Dense. No breaks. No hints. Line breaks, enjambment, and other poetic structures are gestures at significance and meaning. I didn’t want to do that in these poems, because that is not how my dreams communicate to me. They communicate purely through symbol via image, so I wanted the focus to stay with the images rather than the structure. This forces the reader to pull their own emphasis from the block, rather than me laying out through the form what the more “meaningful” moments are. Dream analysis is so so personal, and no image will resonate with one person the exact way it does with another. I wanted the work to lean toward prose because there is a narrative to these poems, as there is in dreams. But since that narrative follows a more intuitive and non-linear one than strict prose would, the in-between world of the prose poem feels just right to me.

Q: Given your explorations into the prose poem, foregoing line breaks and other physical structures, are you noticing any shifts in the way you approach rhythm, the line and the breath? Is the shift in form providing any unexpected changes in the poems you’re writing?

A: I think the main difference I notice is my use of punctuation as the main mediator of rhythm and emphasis, rather than the line break. This form also lends itself to a directness that I wasn't expecting, and a lean towards plain language. But that could have more to do with the subject matter than the form. Since the content is so surreal, I need the diction to be as grounded as possible.

A: As I indicated in a previous answer, I am naturally most drawn to fabulist, surrealist, and magical realist short stories and novels. All the writers I listed above, I continually revisit. But I also find myself returning to Natalie Shapiro’s Hard Child and Lyn Heijinian’s My Life. I reread Virginia Woolf’s Mrs. Dalloway every few years. It inspires me on every level.