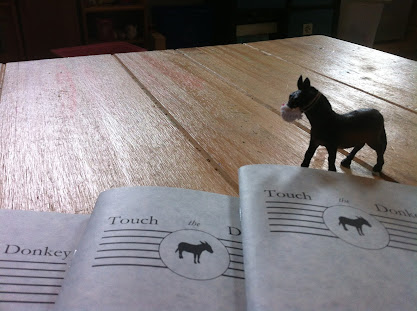 Colby Clair Stolson is a young writer in Edmonton, Alberta. He grew up somewhere in the in-between, in a town called Ponoka. Every day he asks himself, ‘who knows if the moon’s/a balloon’?

His poems “flam,” “our mine” and “today” appear in the twenty-ninth issue of Touch the Donkey.

A: These are all concrete poems composed with a typewriter. “flam” and “our mine” were composed with a Royal Futura 800 and “today” with an Underwood from the 40s (I think; they’re hard to date) + pen. They are each playful, though each was occasioned by a different mood or thought: “flam” by the ever-elusive rural albertan masculinity; “our mine” by romantic love; and “today,” well, today is also often toady, ain’t it? absurd, I mean.

A: These poems occupy, along with the modest amounts of conceptual poetry and sound poetry I’ve dabbled in, one node in my poem-brain. The node most accessed for writing lately is a lyrical one. The two nodes often communicate with one another, and are not so easily discrete, but what ends up on the page looks quite different. Something these poems hold in common with other poems I’m writing is that they’re all fairly contained. Every poem I write seems to have a singular focus. If I stray beyond the one purpose or idea of the poem, things tend to get a bit sloppy.

Q: Have you any models for this kind of work? What authors or works are in your head as you attempt to create new pieces?

A: bpNichol is almost always in my head, even when I’m not writing. My experience of his work is by no means comprehensive, but I think I “get” the spirit, and it is so delightfully playful. In particular, I love “[fr/pond/glop]” from art facts, and “Historical Implications of Turnips,” which was published as a broadsheet. Right beside him, of course, is Steve McCaffery. Seeing his “Carnival” for the first time was breathtaking, almost the moment the roller coaster takes off. Then there’s Derek Beaulieu, who carries that concrete impulse (not to mention the small press spirit!) along better than anyone.

Q: I like the way you describe your process as exploratory. Are you focusing, purely, on those ongoing experiments, or are you attempting to corral any of these wayward pieces into either a chapbook-length or book-length manuscript? Has book-making factored into any of these experiments at all?

A: A collection of pieces is supremely interesting to me, and is something I desire. I love the coherence that is often felt when “wayward pieces” are placed together; sporadic efforts seem suddenly consistent with one another, like yes I’ve been smacking my head against that wall, but it has always been my head, and that wall! Which is actually really comforting!

I love the form and object of the book as one whole attempt to capture something larger than its parts are able to do alone. This is maybe especially true for poetry. All that said, while I have corralled poems into a chapbook-length manuscript to exemplify one stage of my life/writing, I think my writing is not yet special enough, and so I might very well have to move on, just as that time and those attitudes have. More so now than ever, the experiments are ongoing. One day, direction.

Q: Well, if two words placed side by side can be considered narrative, one poem composed after another poem can certainly be considered direction, although I understand the frustration of feeling a potential lack of overall coherence (and the worry that the lack of same is a negative). You mention, also, a lyrical node you’ve been pursuing: do you approach these pieces differently than your visual or sound pieces? How do the different strains, or “nodes,” of your work interact?

A: Is it too cliché to say my lyricism is almost always a lament, something lost, something absent, an expression of grief? Even when the subject is not, I think a distance characterizes my lyrical poems. These concrete poems published here in Touch the Donkey are present (maybe “immediate” is too far), I would say, because I’m not bringing anything back from the dead. And “today” is more gleeful a poem I could ever write lyrically. The strains do interact though. Visual and sound poetry have tuned my eyes and ears to what’s already there in language as sound and object. “Violet” starts to sound like and take the place of “violent.” An ampersand (&) printed on the page starts to look an awful lot like a cat. And so those new ways of seeing and hearing will play out in whatever form best suits the content.

Q: What kind of models have you for your attempts at the lyric mode? And what is it about lyric, do you think, that prompts you into lament?

A: To name a few: the late great Patrick Lane. Edmonton via West Coast poet Tim Bowling. Anne Carson’s Autobiography of Red. Early Atwood. Li-Young Lee. Charles Olson. Frank O’Hara’s “Having a coke with you” (which is in fact a happy lyrical poem!).

I think maybe the lyric form as an expressive medium is where I am most up against my own being-in-time. I have either not yet understood time or have not yet reconciled myself with it. The “moment” which prompts the writing is also always gone.

Q: Finally, and you might already have answered a bit of this, but who do you read to reenergize your own work? What particular works can’t you help but return to?

A: bpNichol definitely. His work inspires me and always re-excites me about the possibilities of writing. Robert Creeley’s “The Rain”. Anything Beckett. Henry Miller’s The Smile at the Foot of the Ladder. Kroetsch’s Seed Catalogue. And definitely Anne Carson’s Autobiography of Red. Her writing just seems otherworldly.