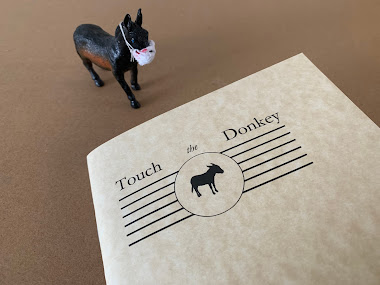 David Buuck lives in Oakland, CA. He is the co-founder and editor of Tripwire, a journal of poetics (tripwirejournal.com), and founder of BARGE, the Bay Area Research Group in Enviro-aesthetics. Recent books include The Riotous Outside (Commune Editions, 2018), Noise in the Face of (Roof Books 2016), SITE CITE CITY (Futurepoem, 2015) and An Army of Lovers, co-written with Juliana Spahr (City Lights, 2013). He teaches at Mills College, where he is the chief steward of the adjunct faculty union, and at the San Quentin Prison University Program.

His poem “Total Persuasion Architecture” appears in the thirty-second issue of Touch the Donkey.

Q: Tell me about the poem “Total Persuasion Architecture.”

A: Well this is an excerpt from a longer series of poems that continue to slowly accrue, currently in a doc titled “AfterJules” which I presume means Jules Boykoff, or more likely in conversation with Jules’ work and that of other contemporaries who work to find ways to articulate the scale work of local-global political economies and cultural politics. In this section, I was trying to find ways to signal the uncanny relations between the individual/subjective biopolitics of self-regulation and the broader global matrices of capital, finance, and infrastructure. How does one’s body attune itself to forces that seem beyond the reach of individual agency? How do the economic metrics of something like a condo’s ‘seaside view’ (e.g., the speculative real-estate that can put a price on a vista) relate to one’s everyday drinking water? I make no claims that the poem is successful in mapping out such relations, but I suppose this might be one way to conceptualize the jumping-off points for trying to language such questions.

A: Most of the work I’ve been doing over the last year or two has been in prose, either fiction, essay, or some hybrid of both. Verse poetry – when it ‘comes’ – remains for me a site for a certain kind of thinking in and through language, especially when a kind of highly torqued articulation of concrete and abstract relations seems to the most productive way of working through a set of concerns, be they political or aesthetic or – most likely – both. Form as an extension of content is an old canard, but if ‘content’ can mean something more than ‘subject matter’ but rather a set of pressing questions in need of agitation, disruption, unpredictable swerves of inquiry, etc, then following thought and counter-thought through poetic practice tends to be the formal approach (for me) best suited for certain concerns that cannot be contained and ordered by conventional prose genres.

Q: I’m curious about your work in the hybrid: how do you distinguish between genres, and how do you decide when such arbitrary boundaries require crossing?

A: It’s pretty intuitive though often dictated by the project/animating questions that push themselves into form in the doing. I’m not super invested in genre though at times if I’m writing something more like a ‘story’ I will be thinking about narrativity, the sentence and paragraph, the time of writing/reading, etc – more formal concerns than genre, I suppose; whereas in verse other questions arise which can dictate various choices/directions. I guess I mostly let the writing/content/interrogations dictate the formal approach/process of unfolding, even if at times I will work within compositional constraints (such as sentences-only, stanza length, etc) if they propel the work forward into places I can’t anticipate.

Q: At what point do you allow the hybrid to develop naturally? Do you begin with a sentence, a phrase or a sense of shape? Have there been poems, for example, that have evolved into hybrids?

A: Yes, often I will begin with a phrase or ‘sense of shape’ as you put it – a loose sense of form or occasionally method/concept/constraint within which to explore — but then generally the compositional ‘logic’ (rhythm? propulsion? line of inquiry?) pulls me further into whatever form the work seems to require. Occasionally I may struggle with a sentence that I want to see as poetry (i.e. chopped into linebreaks to slow down reading/comprehension and attend to its sound-parts) and in at least one case have used a sentence in both a prose work and then in a separate poem (and then again in a different prose-context, as a language-memory that emerges out of a different narrative-genre context). But generally the ‘project’ will dictate the form. At the end of the day, really, there are works that ‘insist’ on being poems but otherwise I tend towards more cross-genre prose constructions these days. The ‘poetry’ tends to arise out of certain moments (protests/riots, the temporal contractions of online-mediated life, etc) in which the speed/disruptions/disjunctions of socialized language and its particular musics seem to require more fragmented, intuitive articulations and rhythms.

Q: Where do you see this particular thread of your work headed? What is it you feel your writing is working towards?

A: Not sure yet. I have a number of prose projects in the works, but will no doubt always turn to verse when certain questions or formal concerns seem to demand. I feel (hope!) that I’m more open to new and different directions in my work (vs using the same moves and habits to each new piece) to the point where I can’t really predict how the work might develop, which (I hope) is a good thing!