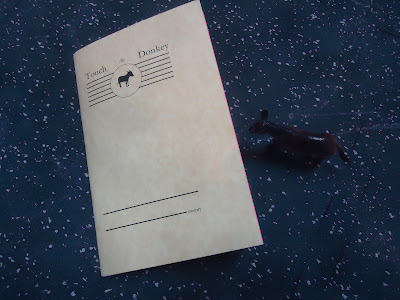 Her poem “PART TWO: THE STARS” appears in the twentieth issue of Touch the Donkey.

A: The project began as a meditation on evolution and heredity, the repeating and mutating patterns (tessellation, honeycombs, etc.), and how those patterns intersect myth, human relationship, family, language and my own ridiculous existence.

In past projects, I wrote through various characters (a whale, a parasite/host, a whole slew of perforated bodies) as a way to approach messy intersections, messy bodies. It felt good to write from behind a curtain. But now, I’m awkwardly figuring out how to write as myself, in my own life.

Three years ago, I lost my mom and became pregnant with my daughter. All at once. The news came that my mom was dying. The next day I found out I was pregnant. Two days later I took a redeye Greyhound to St. Paul to help my mother (and father) through the last three weeks of her life while this tiny, sticky fractal of new life burrowed in. The intensity of that experience (it’s reverberation, syllabus, whatever you want to call it) transfigured this project – became the horse it rode. Losing a mother / becoming a mother.

The first section of this project is titled The Forest. Minnesota and the north woods, where my mom grew up, where I spent much of my childhood, emerge here. I carry those woods around with me. They make me feel like myself and embody my personal mythos, family and language.

God emerged in Part Two: The Stars, which still surprises me. I’m not religious but I do value ritual, the ecstatic, the magic of language. I began writing about stars and constellations. We are the makers of narrative. We connect dots. We look up into a black vacuum and translate pin pricks of light into bulls, crabs and lions. My mother was born under the sign of cancer, which is also the illness that took her (nasty tessellation, another kind of fractal.) All narratives are parallax. I think of “god” as parallax, as a constellation. In that, I’m also interrogating (and exalting in) the value of art and all creative, iterative acts. Life itself, I suppose.

A: This is the only work I’ve been doing lately. I’m not the sort of writer who has multiple projects going at once. My progress has been embarrassingly slow—initial scribblings for this series started about 5 years ago. There are large swaths of time inside those years where I haven’t written at all. The project prior to this (Dromeda) was a metaphorical narrative told by two voices sharing one body with central themes of mirage and reflection, mirrors and glass, light and dark, self-love and self-hatred. It was more inward-looking than this new writing but a few threads carry over to this newer work—the phrase “god is a...” I nearly forgot that appears in the last project. Its emergence surprised me then, too. Also, addressing the creative act—the last project used glass-blowing as a metaphor for writing poetry, weaving comes up in this new work as a similar placeholder.

Q: You mention your prior work being more inward-looking than your current project. What do you feel brought about this shift, and how is the difference presenting itself in the work?

A: I already noted how central the birth of my daughter and death of my mother are to this work, and as cliché as it is, I think that really is the pivot point. Where past work has been, mostly, an internal dialogue, I feel like I’m writing to my daughter in this newer work. A bedtime story, maybe – one you tell your child after they’re already asleep. And then there are also passages that act like a sermon or eulogy. A fairy tale and a eulogy. Binary stars. The outward look most clearly presents itself where the work addresses readers directly (“friends, you know that the hours worked here are holy”). There’s more of an invitation into this work.

Q: Were there any other writers whose work might have provided you direction? What poets are sitting at the back of your head as you begin to work on a poem?

A: The opening line is a clear nod to Inger Christensen’s alphabet. That work certainly has impacted this project and how it goes about collecting the world, the power in naming things. Aase Berg’s work, in general, is always clawing around in the back of my head. Lorine Niedecker and Clarice Lispector as well. Those are the big ones. I’m not sure how to draw clear lines between my writing and these other writers (whom I admire so much) other than to say I think my poems share with each of them a similar sense of what’s at stake.

Q: What is it about their works, specifically, that have prompted your own? Is that something you’re even conscious of, or is it more intuitive?

A: It’s intuitive in how anyone’s affinity for another writer is intuitive. I certainly didn’t intend to alphabet and it wasn’t until quite a bit later that I realized (in rereading that opening line) that work was in the background of my thinking. The ways Lispector and Berg write messy bodies was formative for me, how their writing offers a kind of maximalist path to the ecstatic. And, on the other side of that is Niedecker’s vivid restraint in language, both her and Christensen’s attention to the natural world, the zeroing in, the naming of things, transforming the mundane, or maybe wiping the mundane film off the sublimity of the natural world. Rhythm is part of all this as well. alphabet is hypnotic, like a conjuring spell. All of these writers are conjurers in my opinion.

Q: With two trade collections and a work-in-progress over the past decade or so, how do you feel your writing has developed? Where do you see your work headed?

A: Hmm. My initiation was in visual arts and that is still the seed of how I understand myself as a writer. I largely think of my development through the lucky circumstances of community I’ve been afforded, chiefly revolving around Woodland Pattern Book Center and Naropa University. That’s where I began to complicate my understanding of what’s possible. More recently, I’ve become really good at dissolving into the immediate lives of those around me. I’ll go through periods where I write almost every day for a few weeks and then only sporadically for months. I’ve nestled myself into a comfortable warren of family life and, somewhat ironically, back into a community of visual artists and designers as an administrator. I’m relearning some important lessons through watching them work and I get to remain somewhat invisible creatively. That’s how has my writing developed over the last decade or so … Slowly, mostly in secret, often not on the page and, as of late, in near total writerly isolation.

Am I answering the right question? Is this what you are asking me?

Where is my work headed? I plan to keep working on this current series and find out where it takes me. Right now, I’m working on Part Three: The Lake. Someday I’d like to come out from hiding and reinvest in the writing community here in Milwaukee. Woodland Pattern remains a beacon.

A: In terms of poets – Aase Berg, as already mentioned, is central. In particular, Transfer Fat, but all of her work translated by Johannes Göransson. As well as Clarice Lispector, Elizabeth Robinson, Stacy Szymaszek, Alice Notley, Roberto Harrison, Selah Saterstrom, Aimé Césaire. This is what comes to mind, but to be honest, I don’t often return to a book once I’ve read it. When I want to gather energy for my own work it’s more about gathering language or ideas that touch where I’m writing from. Right now, I’m reading Sapiens: A Brief History of Humankind by Yuval Noah Harari which discusses the evolutional leap to fictive language. (conjuration!)