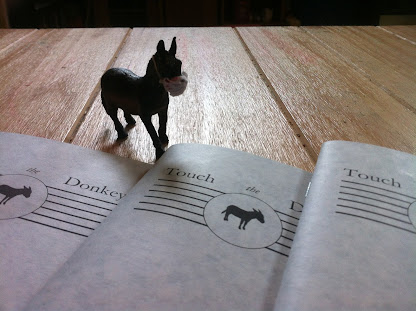 Sarah Alcaide-Escue is a writer and artist living in Florida. She is the author of the chapbook Bruised Gospel (The Lune, 2020), and her work has most recently appeared in The Meadow, *apo- press, Always Crashing, Channel Magazine, and Mud Season Review. You can learn more about her work at sarahescue.com.

An excerpt of her work-in-progress “Season of Hunger” appears in the twenty-ninth issue of Touch the Donkey.

Q: Tell me about “Season of Hunger.”

A: Season of Hunger is a project I’ve been working on since I graduated from the Jack Kerouac School at Naropa in 2018. It’s a cabinet of curiosities (of sorts) inspired by my love for folklore and fairy tales. I wanted to create a space where I can rewild my body, where I can be soft and honest with myself about my experience as a disabled woman with invisible illnesses. It’s also a space where my disability is front and center—a lived reality that enables empowerment, self-love, and empathy, but also doesn’t shy away from the darkness that can exist there.

A: Over the past several months, I’ve been reading a bit more than I’ve been writing. After grad school, I was stuck in a frame of mind that made reading feel laborious, so for a while, I revelled in non-language and experimented with different forms of expression and creation—mostly gardening, baking, and dancing.

I’ve allowed myself to make seemingly nonsensical leaps and have fun with the process instead of worrying about the end result or what it should look, sound, or feel like. Season of Hunger gives me a vehicle through which I can celebrate my own magic (Amanda Leduc talks about this in her book On Fairy Tales, Disability, and Making Space). Overall, this project feels more spontaneous and unbound by structure, time, and logic than some of my other work. It’s been healing and joyous and challenging all at once.

Q: It is good to know that you’re able to continue to write after your studies completed; I know too many who write as part of a grad program, but then somehow don’t establish their own structures outside of the structure of a writing class or a writing program. Is this something you experienced at all? And if so, how did you manage to find your way through it?

A: I’m grateful that I was able to go to grad school, and the friendships I made during that time have changed my life in the best possible ways. Naropa is a place where collaboration and experimentation are encouraged, so there were always exciting projects to get involved with when I was there.

Before the pandemic, I enjoyed going to writing residencies or having my own “retreat” so I could give myself the time and space to only focus on writing. Though it’s not safe to do that right now, I do miss it and look forward to doing it again one day.

It’s a gift to be surrounded by a supportive creative community, but you don’t have to be in the same physical place/space to be a part of one. The pandemic has made me rethink how to interact with others (what’s possible and accessible) and thankfully many of us have been able to remain connected through the use of technology, despite the distance between us.

Now, there are tons of brilliant online workshops, panels/talks, and readings available. I’m so appreciative of all the people who have made and continue to make these opportunities accessible. For example, Collective Aporia, Emergence Magazine, and Greywood Arts always have wonderful online events and workshops for anyone interested.

All in all, I try to stay connected however I can, and I’m always open to collaborating with other writers—whether it’s on a specific project, exchanging letters and postcards, or free writing together on video chat. These are some of the things that have kept me focused and inspired over the past year, and though it’s not a set structure like a program or residency, it’s helped me a lot.

Q: Are there any particular writers or works that have influenced the direction of this project? And if so, how have those influences presented themselves through your work?

A: Lately, I’ve been exploring Medieval bestiaries and Celtic folklore, but a lot of specific artists have influenced me so far with this project. I’ve been surrounding myself with these people and their works, not only because they’re inspiring, but because they bring me a sense of joy, wonder, and empowerment.

(I think in lists)

Books: On Fairy Tales, Disability, and Making Space by Amanda Leduc; The Bloody Chamber by Angela Carter; Women Who Run with the Wolves by Clarissa Pinkola Estés; Italian Folktales by Italo Calvino

Each of these artists has made my writing feel more possible, and they connect shape and meaning in such unique ways, even though some of them may not deal directly with specific folktales or myths. There’s still magic and mystery there, and possibility. They also reveal historical and social contexts which have challenged how I think about and experience certain types of fairytales and folklore (I’m studying European currently). I think each of these artists have somehow explored, challenged, and experimented with fantastical stories, and they've created their own. They’re all just brilliant to me, honestly.

Q: How did you get to where you are with how you construct poems? You seem to adhere to the extended fragment, accumulating short sketches into and towards a larger shape. What brought you to working this particular form over, say, a more traditional lyric, or even prose? What do you feel you can accomplish through the extended fragment that might not be possible otherwise?

A: I wanted to create a sensory experience, where the language can be felt in the body, where it can reverberate, ripple, and move. I’ve grown quite fond of the extended fragment, and I think it’s because it gives the words more room to breathe.

I seldom set out thinking I’ll write in a specific form or structure. A lot of times, I write and let it come out how it comes out, and then I use more “control” during the editing process. This project started out as scribblings in notebooks and on my phone, and it expanded from there, and it keeps expanding. Writing Season of Hunger as an extended fragment just feels natural, and I don’t think it could be written in another way. At least for now.

I also love the shape the words take on. To me, it’s visually pleasing, but it also creates a landscape of its own. The positive and negative space tell their own stories. There’s another world there, surrounding the words on the page and stretching past the margins.

Q: You mention wanting to create a sensory experience: how important is shape or sound to the structures of your work, and how do they exist alongside, through or even despite, meaning? Are you working your poems as a combination of the three—shape, sound and meaning—or are you working one consider over either of the others?

With Season of Hunger, I’m working with shape, sound, and meaning, but certain sections of the project have been more focused on shape and sound. In a way, it’s an experimentation in language as it stands with no expectations, though so much of language inherently holds some sort of meaning. It’s been an exercise in play and experiencing the language in the body first, then the meaning follows, or perhaps meaning untethers itself or surfaces or somehow excavates itself. Sometimes writing this has been similar to when you say the same word over and over again and the meaning somehow gets momentarily lost or misplaced. And other times, it’s like that in reverse.

I can’t help but return to The Carrying by Ada Limon, Catalogue of Unabashed Gratitude by Ross Gay, and Wild Iris by Louise Glück.