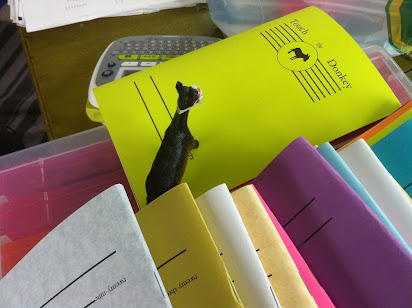 IAN’s poems “MOTIVATION” and “roguelike” appear in the thirtieth issue of Touch the Donkey.

Q: Tell me about the poems “MOTIVATION” and “roguelike”.

A: “MOTIVATION” is a game poem about resentment and comparison. When I’m at my lowest, I get jealous. I see my friends succeed and feel like there’s no success left for me. I forget what I actually want in my life and start thinking about how I could get what they have. When the other person is doing the same thing, you get an unhealthy dynamic where you’re both motivating each other through spite to live up to a standard that neither of you really wants. I wrote this pre-pandemic but I think that now more than ever, we’re increasingly reliant on social media and increasingly disenfranchised by capitalism, and both of these things cause us to dehumanize each other and see humans as competitors. The actual enemy is the system and the standard that’s been set, but it’s easier to beat down and destroy something tangible, something flesh and blood.

“roguelike” is a poem about the video game genre of the same name. A roguelike usually involves conquering a large environment by defeating enemies and collecting more powerful equipment, all while making sure you eat, drink, and rest enough to stay alive. If your character dies, then they die forever – you have to make a new character and start from the beginning with nothing. Earlier roguelikes (and the original game, Rogue) are lonely, esoteric, and challenging. The graphics are just a series of text symbols on a black background, leaving much to the imagination: 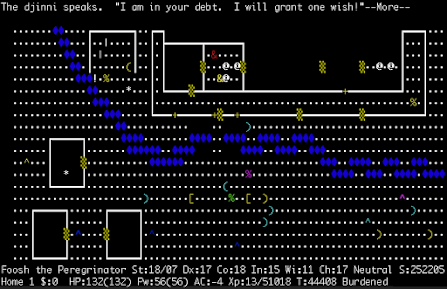 (Above: A screenshot of NetHack, a roguelike game.)

You often find items with mysterious names and no clear purpose. You have to use them to see what they do, and sometimes they hurt or disadvantage you. The environments are large and wonderful to explore, but they’re incredibly dangerous, and you don’t stay alive for long. But as you continue to die and return to life, you learn, you get better, and you stay alive for longer.

These early roguelikes have a lot of mystery and magic to them, and their technological restraints and limits infuse them a lot of poetic value. My poem is just a very short ode to the genre, but there’s a lot more in these games that I’d like to explore through poetry, especially with their text art and symbology.

Q: How do these poems compare to some of the other writing you’ve been doing lately?

A: Like most of my writing these days, these poems are about lonely people in hostile environments, either of their own making, or of someone else’s. They’re little dioramas to find yourself in, to figure out who you are and what’s around you. It’s not always easy to find yourself in art. Sometimes you have to make something vague and strange and just drop yourself into it and see how it feels and what it does to you. Maybe it’s somewhere you needed to be but didn’t know existed.

I’ve always sort of unwillingly liked difficult, hostile games. I always complain about how frustrating they are, and how I never want to play them because I get so angry, but there’s something very satisfying about conquering something that hates you and wants to see you fail. Of course, these games don’t actually hate you: they’re cruel on the surface, but their purpose is to give you a challenge that you can learn to overcome. But that’s the nice thing about hard games – as bad as they get, they’re still controlled environments with clear rules and boundaries.

Poems, like games, can create these rich worlds that you live in for a moment, where you’re all alone, and you have to figure out where you are and learn how to survive. Little microcosms where you earn something that you can take with you when you leave.

Q: I’m curious about creative types who work in more than one type of genre, but haven’t spoken to anyone prior to you who works so actively within poetry and gaming. The ways in which you describe your attraction to gaming and the types of writing you’re attempting make me wonder how the two sides of your creative self interact, if at all. Does your work with gaming influence the ways in which you approach writing, and vice versa? Or are you simply attracted to these two different structures due to the commonalities you see there?

A: I definitely think I’m attracted to the two forms for similar reasons; they’re both about play, they’re about working within limitations, about creating worlds and spaces to explore. Until recently, I worked with the two forms pretty separately. In the past few years I’ve made a more conscious effort to combine the two, but I still tend to fall back into using one or the other. I’m still used to thinking of them as separate worlds, and there aren’t a ton of spaces where those things come together. (Though I’m finding opportunities – I just published a game with canthius, which mainly publishes written prose and poetry. Wild!!!)

But I think that working in any one artform inevitably affects how you do the other, whether it’s conscious or not. Since I’m actively making games and writing poems, all those ideas are always jumbled in my head and I’m always thinking about which ideas would fit best in what format. I have a pretty clear idea of what I want to communicate and evoke through my art, and poems and games to me are just different tools for realizing that vision. Sometimes one is more appropriate than another, sometimes I can combine them and do something really great.

Q: Do you have any models for the kinds of work you’ve been attempting? What writers or works are in the back of your head as you write?

A: “MOTIVATION” is pretty directly inspired by gamepoems, by writers like Holly Gramazio and v buckenham, as well as Yoko Ono’s collection, Grapefruit. I started thinking about this format after reading Harry Josephine Giles’s primer on gamepoems a few years back, which got me interested in trying to more consciously merge games and poems in my art. “roguelike” is mostly inspired by the writing style of old roguelike games, but also by some local Ottawa poets who have written about the video games they’ve played, like Leah Maclean-Evans’s poems about Stardew Valley, and Marie-Andrée Auclair’s poem about a Skyrim mod.

I’ve also been really into poems/poetic games made with the Bitsy Game Maker, like these by Sean S. LeBlanc, nat underscore content, mark wonnacott, and Sarah Gould. What I love about poems made in Bitsy is that they have physical space that you can move through. The text is hidden around and can be read in different orders. Bitsy is a very restrictive engine: the game space is small, you can only use three colours, and the player can only walk around and read text. Again, I think there’s a lot of poetic potential in these limitations – there’s only so much you can actually show, so there’s always a lot of power in the gap between what’s visible and what’s implied.

Q: I’m curious as to how you build your poems as being “inspired” by different games. Are you using the game as a prompt, or attempting to articulate something about the game itself in the poem? Are the ideas around any particular game utilized solely as a jumping-off point, or are you attempting to replicate structure within these pieces?

A: It depends on the piece. With “roguelike”, I’m trying to articulate something about this type of game, about how the game is designed and how it makes you feel while playing. I’m also trying to capture the aesthetics of the genre in the poem: the worlds of roguelikes are huge and empty, and the descriptions of the environment and the items you find are sparse. Poems are also often about space and economy, so I’m trying to make a connection there. And as a game designer, I’m just really interested in the evocative potential of game systems and rules, so writing poems about those systems is another way to look at them and think about the intentions behind them.

I’ve also written pieces where I use the game more as a jumping-off point to talk about something else. For example, I have a poem about Pacman that uses the game as a touchpoint to then think about human bodies, what we do with them and what they were “made for”. As a game character, Pacman is made to eat pellets. But does he actually want to do that? Or does he just not see any other options?

Q: With a handful of published chapbooks under your belt, how do you feel your work has progressed? Where do you see your work headed?

A: Looking back at my first chapbook, I think some of the work could use some tightening, but it all feels recognizable next to the work I’m doing now. I’ve always been writing about loneliness, alienation, and escaping to better worlds. I think over time, my work has gotten more specific and more personal. Not that there wasn’t a lot of me in my early work, but my current work is very tied to my own specific preoccupations and identity – I’m writing a lot of video game poems lately, my last chapbook was about navigating the world as a fat person, and I’m publishing more poems about my gender identity and how I fit into prevailing narratives of gender. My earlier work spoke more generally about feelings of alienation, and now it’s more about the specific mechanics of alienation, and about figuring out and filling the gaps and problems in current discussions of identity and belonging. I think I’m going to stay on that path for a while.

A: My most read book of poetry is still probably the collected works of Alfred Starr Hamilton. I’m always trying to get there, wherever those poems live.