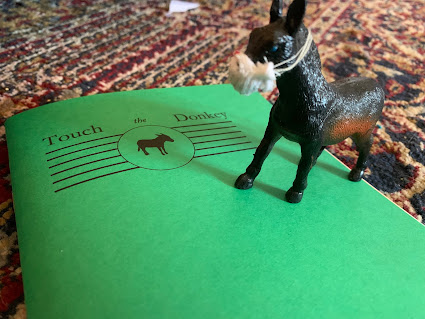 Margo LaPierre is a Canadian editor and author of Washing Off the Raccoon Eyes (Guernica Editions, 2017). She is newsletter editor of Arc Poetry Magazine, membership chair of Editors Ottawa-Gatineau, and member of poetry collective VII. She won the 2020 subTerrain Lush Triumphant Award for Fiction. Her work has been published in the /temz/ Review, Room Magazine, Arc Poetry Magazine, filling Station, CAROUSEL, PRISM International, carte blanche and others. Find her on Twitter @margolapierre.

Her poems “The World’s Most Beautiful Desert” and “Subdued, [a forecast]” appear in the thirty-third issue of Touch the Donkey.

Q: Tell me about the poems “The World’s Most Beautiful Desert” and “Subdued, [a forecast].”

A: “The World’s Most Beautiful Desert” started out as a section of a creative non-fiction piece. I was trying out bibliomancy, which is a practice of seeking guidance or predicting the future by randomly picking a passage from a book. I based this poem on a quote from Gaston Bachelard’s The Poetics of Space in which Bachelard discusses Philip Diolé’s book Le plus beau desert du monde (the title of my poem) in the context of carrying vast spaces within us, how a deep-sea diver walking across the desert transplants the sea through force of the imagination. I like the idea that we are atlases of all the proprioceptive maps our bodies have recorded in our lifetimes. The poem visits the idea of cross-genre pollination. Bonus “trivia”: all the aquatic life in it can be found in the West Edmonton Mall’s aquarium, where I have yet to visit.

“Subdued, [a forecast]” was inspired by and structured according to your poem “Subtitled, [a primer]” from Life Sentence, which especially drew me in with its rhythm. The whole book did.  It’s a deeply fluid, liquid collection. Personal and intimate without sounding confessional. I have an affinity for rhetorical questions in poetry, I guess I use them a lot. “Subdued” is one of several medication poems in my collection-in-progress. This poem addresses a specific part in my mood disorder cycle (my own rhythm) — a fallow or gathering stage where I sleep more and become more receptive/reactive. I can edit and read but I can’t really write. I stay away from social media because I have nothing to say and get a fear/block about perceived publicly. After that lifts, maybe after months or weeks, it lifts into lightness and flow and inventiveness. A trick I’ve found works for me re: writing poetry during the low time is to borrow forms from poets I admire and write pastiche poems.

A: I’m at the stage of wrapping up a poetry manuscript and sending it out on submission, so these two poems are part and parcel with my other current work, most of which take up themes of disorder and/or community. I play around a lot with various forms throughout the collection but one thing that comes through in these two poems and the manuscript as a whole is the presence of other poets and writers. I’ve been in conversation/communion with other writers through the poems. It’s all porous, heavily influenced by what I’ve been reading and the poets I’ve met.

Q: Has your composition process shifted since the publication of your full-length debut? Do you approach or consider your poems any differently since having put together a first manuscript?

A: Definitely! My first book took several years to compile, as is the case for many first-time poets. Any of the poems I considered “good enough” to go in that collection, written between the time I was eighteen to twenty-five, went into Washing Off the Raccoon Eyes. With my current manuscript, I had a project idea in mind, and receiving grants for this project when I was first starting to write it helped me to pursue the concept in earnest. So I’ve been writing poems with the book in mind, which is the opposite of what I’d done for my first collection. I still write poems outside of the project, and some of the “stray” poems find their way in, like one that was inspired by a WWE match with The Undertaker and his brother Kane. My husband is a wrestling fanatic and I told him to pick the fight most special to him and I’d watch it and do a bit of research and write about it. A big difference in terms of process as well: the second I finish a first draft of the poems, they go into the collection manuscript. Any editing happens as part of a larger whole. I was intent on playing around formally this time too, so there’s more experimentation.

Q: Have you any particular models for the kinds of work you’ve been attempting lately? Any particular authors or works in the back of your thoughts as you write?

A: Oh, yes, goodness, many! Probably more than I should list off here. I recently created a series of centos, four of them, each line taken from a poem — so not a single word is my own, just the composition itself. I change capitalization in a few cases, but I don’t touch the punctuation, and the line breaks are the original authors’ own. I borrowed lines from over fifty poets. The longest cento links a line each from 49 poems.

I’ve also been working in pastiche and glosa, and have written poems “in dialogue” with work by Sina Queyras, Gwendolyn MacEwen, Chen Chen, Lisa Robertson, Hoa Nguyen, and yourself, in “Subdued.” And I do have an ekphrastic poem inspired by Canadian visual artist Eliza Griffiths’ painting “Intuition: Oral Roberts pose,” 2003, oil on canvas.

This project I’m working on is kind of a kaleidoscope.

Q: I’m curious about your work in pastiche, ekphrastic and glosa, as well as your engagement in dialogue with works by other writers. What do you see your work in such forms, and such dialogues, accomplishing that might not be possible otherwise?

A: Hm, this is a really good question. I guess it begs another question: What am I hoping to accomplish in my poems anyway — and how are these forms a better way of doing that? The poems in this collection, taken as a whole, are intended to invite readers inside of psychosis, neurodivergence, and traumas and violences associated with womanhood as I’ve experienced it, and to celebrate strength and perception. I want to create something accessible for readers that still manages to tilt perception. Bringing in other voices is part of this prismatic project. The poetry community has kept me alive and connected throughout the pandemic. Community is treasure. Glosa, pastiche, and cento make community visible on the page —inextricable from the poetry, just like poetry has become inextricable from my life. I hope that the poems that engage with others’ work nudge readers towards seeking out those poets. And ekphrasis is pure fun and flavour, and pulls strong feelings out of me in the generation of the work the way my favourite shows, movies, artworks, and books do. In ekphrasis I respond to Anthony Bourdain’s Parts Unknown Sicily episode, Euphoria’s Rue Bennett. Mental illness can be isolating. I’ve been looking toward other poets and creators, even fictional characters, who have artfully expressed their own experiences.

Q: With a published debut, and your current work-in-progress, how do you feel your writing has developed? Where do you see your work headed?

A: When I wrote the poems in my debut collection. I liked reading poems but hadn’t learned their mechanisms. If the left poetic muscle is intuition, then the right one is intention, and I grew into a practice that is now more intentional.

Attending workshops, like Stuart Ross’s workshops and the Tree Reading Series’ workshops, and now attending UBC for a Creative Writing MFA, in which I’ve maxed out the number of poetry credits I’m allowed to take, have been instrumental in my development, as has been collaboration with my Ottawa poetry crew, the collective VII, composed of Chris Johnson, nina jane drystek, Conyer Clayton, Ellen Chang-Richardson, Helen Robertson, Manahil Bandukwala, and myself.

I’m now headed into fiction, writing a collection of short stories inspired by beloved articles of clothing I’ve owned, and a novel of sex, work, madness, and found family. Who knows what poetry will look like for me as I take my foot off the gas (a metaphor, only — I do not drive). Ahoy collabs!

Q: I’m curious about your collaborative efforts. What has collaboration been allowing that might not have been possible otherwise? Do you see the process shifting your work at all?

A: The pandemic would’ve beer far lonelier if it weren’t for VII.

Happiness and a sense of connection might not have been possible were it not for these amazing humans. The pandemic tested my emotional and mental stamina in several ways and VII may have been what’s actually kept me afloat. Our collective’s “birthday” is March 21, 2020. For all the bad of the pandemic, it also brought us friendship. We talk through our group chat every single day, mostly about our lives in general, but also swapping tips and bits of literary knowledge and fluff, helping publicize each others’ events, peer-reading/editing each others’ manuscripts (Manahil, Conyer and Ellen all have full-length books coming out in 2022 and beyond!), and sharing resources, memes, and an excessive amount of raccoon digital paraphernalia.

We all have different tendencies re: white space, punctuation, capitalization, form and hashing these out together and making a case for one over the other on our collaborative poems has opened me up to more possibilities for writing and revision in my own work. VII’s second chapbook, Holy Disorder, is forthcoming from Gap Riot Press later this year, and we edited that à sept in a Google Doc over Zoom.

Collaboration can be an event, too! A few months ago, Stuart Ross was down in Ottawa visiting from Cobourg, and he and Conyer and I wrote three poems, collaboratively and simultaneously, using a different approach for each one. I’ve discovered how easy and fun it can be, and it helps to remind me that writing poetry in general can, sometimes, be easy and fun.

A: I’m pretty much always reading five books at once: (1) a poetry book; (2) a novel; (3) non-fiction, often memoir; (4) a craft book; and (5) an audiobook on Kindle that might be any one of those genres. But in terms of what re-energizes my writing and what I return to, books of philosophy and psychology are my go-to. I majored in philosophy in my undergrad, which is when I wrote my first collection, and philosophy and poetry are two peas in this particular pod (“knocks skull”). For my current project, some of the books that helped percolate these poems are The Paradoxes of Delusion and Madness and Modernism: Insanity in the Light of Modern Art by Louis Sass, Self Comes to Mind: Constructing the Conscious Brain by Antonio Damasio, and The Poetics of Space by Gaston Bachelard, all of them highlighted and dogeared.