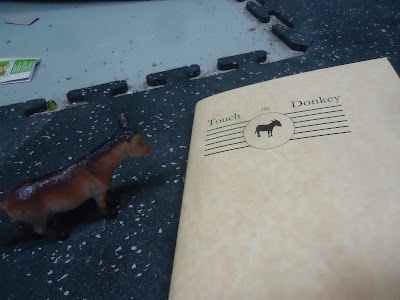 Lauren Haldeman is the author of Instead of Dying (winner of the 2017 Colorado Prize for Poetry, Center for Literary Publishing, 2017), Calenday (Rescue Press, 2014) and the artist book The Eccentricity is Zero (Digraph Press, 2014). Her work has appeared in Tin House, Colorado Review, Fence, The Iowa Review and The Rumpus. A comic book artist and poet, she has been a recipient of the Sustainable Arts Foundation Award, the Colorado Prize for Poetry and fellowships from the Iowa Writers’ Workshop. You can find her online at http://laurenhaldeman.com

Her poems “THE LITTLE CENTURY” and “Progress Diary” appear in the twentieth issue of Touch the Donkey.

Q: Tell me about the poems “THE LITTLE CENTURY” and “Progress Diary.”

A: These two poems come from an ongoing project called Team Photograph, which is a mashup of poetry and graphic memoir (comics) that I am working on right now. Much of it revolves around soccer – I played a lot of competitive league soccer in the Washington D.C. area when I was growing up, and we often played in parks near Civil War battlefields. I am investigating the overlap of professional sport and warfare in those strange places, as well as touching on ghosts, forgotten history and hallucinations. These two poems come from a section of the book that examines the ideas of tribalism, brainwashing and group mentalities.

A: The work in Team Photograph is a bit darker than my first two books. It is more structured too: it exists in a multi-layered narrative, so it’s much more story-driven than work in my previous books. There are challenges to this, but it also means that I can really streamline and focus the poems from start to finish. And these poems are all paired with the graphic memoir sections – comic book style – so it has been really satisfying to watch it all come together.

Q: What brought about these shifts in structure and narrative, as well as this increase in darker content?

A: I actually think that my first two books, Calenday and Instead of Dying, were a departure from my preferred way of working – I really like to have an obsessively-built structure and scaffolding behind projects. Those first two books came out of a time of disarray, a time of chaos unfurling from new motherhood and the sudden loss of my brother. I love those two books, and they do what they needed to do: they navigated bedlam and turmoil in real time. This new project allows me more space to really orchestrate the framework. This is also the first time I am consciously integrating comic-book-style graphic memoir into the architecture of a book of poetry, instead of just as extramural pieces. Exciting stuff!

Q: How, exactly, are you integrating the “comic-book-style graphic memoir” elements, and what do you feel this allows that might not have been possible otherwise?

A: The manuscript of poetry is divided into seven sections, and there is an underlying “story” – a researched history – for how all the poems fit together. But many of my first draft readers were having trouble finding the connections because, well, it's poetry, and poetry isn’t often outwardly explanatory. So I needed another way to invite the reader in and explain the connections. I had been drawing individual “poetry comics” for my first two books and I just love that medium: sequential-art works incredibly well with poetry. So I decided to take that idea further and create seven illustrated section breaks for the manuscript – little essays in comic form that explain the next movement through the narrative, and through the extensive research that I have done for the book. And so far it has been really exciting! The visual components I am creating really compliment and add to the poetry in a way I never expected. I love it.

Q: Have you any models for this kind of work? I know Sommer Browning has been playing with such for years. And then, of course, there was the late Toronto poet bpNichol, who played with just about everything, including poetry comics, producing the first underground comics published in Canada, back in the 1960s.

A: I do. My absolute all-time favorite cartoonist is Chris Ware. I read his masterpiece Jimmy Corrigan, The Smartest Kid on Earth when I was 19, and I was stunned, intoxicated, completely awed by the book. It still awes me to this day. I consider him a poet as well because of the way he uses the cadence and syntax of language to control the reader’s pace. And the way he pairs the panels and the words, with such considerate coordination, is nothing short of magical to me. I also love Alison Bechdel’s work, Bianca Stone’s poetry-comics, and almost every single thing I find in CAROUSEL Magazine. CAROUSEL is a Canadian mag and I adore it!

A: It’s strange because I am also using visual text-based poetry in the collection, like erasures. The comic sections act as a counter to those abstractions – they provide a more straight-forward expository function in the book, yes.

A: Kiki Petrosino, Shane McCrae, Heather Christle and Sabrina Orah Mark are among my favorite writers right now – and when I want to remember why I write, I read them. I am currently reading Sappho again too, because I have been feeling this almost animal need for ancient thought (a very wintery desire) and, oddly enough, the Twitter Sappho Bot reminded me to return to her!