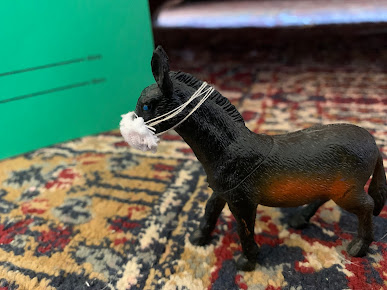 Her poems “Hide and Seek – Jack Whitten (1964)” and “Beautiful Mourning – Christina Quarles (2017)” appear in the thirty-third issue of Touch the Donkey.

A: These pieces were generated out of an ongoing ekphrastic writing project I started early on in the pandemic.

The Milwaukee poetry bookstore Woodland Pattern had been publishing these weekly ‘Prompts Against Anxiety’ by different poets during the initial shelter-in-place period, and Jennifer Nelson wrote one about ekphrasis (writing about art). (Here’s the link to her original prompt: https://woodlandpattern.org/project/ekphrasis-yourself )

One of the things that I’ve missed most throughout pandemic time is going to art galleries. Nelson’s initial prompt got me exploring different collections online, and back into more active relation with looking at visual art again.

I’m in Toronto, and the public library here has a really great inter-library loan system, so I eventually drifted over to books. I started working my way through the library’s selection of show catalogues and artists’ monographs to take home and pour over. I’d choose pretty arbitrarily, starting with books newest to the collection, and following my nose through the various sub-categories work was sorted under (genre, time period, location, etc). I encountered both of these artists' work through this method, and it felt like such a wild, lucky accident with each of them.

I took on this project to try and get started with writing again, at a time when I was feeling pretty empty. I’d set Sundays aside as my day to sit with my stacks of library books and write – and tried, for the first time in a really long time, to write in pencil on paper, rather than using a computer. I’d look for works that made something in my brain feel crackly and woken up, and try to follow that feeling around a bit. Both of these works gave me that feeling.

A: I haven’t been doing a lot of other writing work right now, and have leaned more intently into working on pottery and quilt making during the pandemic. Both of those practices involve assembly and intuitive thinking, or thinking with the body, and orienting towards making shapes. Writing these ekphrastic works also feels like an extension of that assembly and shape-making – what is there on the page of these monographs? what’s here in the room, or going on with my body? how do i make them relate to each other?

Q: Does that suggest you see all of these processes – pottery, quilt-making and writing – as individual threads of a larger, singular practice?

A: I have spent a lot of time feeling like a brain in a jar, in terms of how i relate to my physical self.  pottery, quilt-making and writing all are part of a larger process of getting very granular with the idea of gesture and movement – looking closely at feel.

Q: Part of how I was originally introduced to your work was through your self-published small chapbooks, which felt very much a part of your compositional process in putting together that first collection. I’m aware that you haven’t been producing as many of those small items since, but do you feel your process has shifted since the publication of your full-length debut?

A: An early part of my second book, Common Place, also showed up as a chapbook first, called Salt. I still think of zines and small press as a space for me to experiment, and concretize ideas while keeping things loose and quick. Zines have always felt a little giddy with the tactility of the process – I still lay everything out with tape and scissors. Making a zine of these ekphrastic poems is part of the arc of the project, I think.

With writing book length work, I’m more focused on the idea of the long thought, or keeping the tension of a through line. Knowing that I could take the time and space to think in longer units of measure was a cognitive shift for me.

Q: It’s good to hear I’m not the only one designing chapbooks through scissors and tape! But I’m curious about the ways in which you construct books: were the structural arcs of both collections similar? Were you, each time, working on a collection, or, through the process of chapbook-building, working towards a collection? Or was that all the same thing?

A: i made both books through the process of accrual. with my first book, cutting room, chapbook making was an exercise in thinking of how discrete poems were in conversation together, and then a larger project of figuring out how each of those chapbooks fit together as a book-sized unit. with common place, the project was more intensely constraint based – i had to write a page a day, with the idea that i was writing something long and thinking through a sequence of ideas (about capitalism, ideas of community and togetherness, embodiment, encounters with land) until it felt finished. i put out the chapbook as sort of a stop on the way – my memory is that it’s as much as i had written at the time.

i was in a reading group – the contemporary poetry reading group – for several years where we’d meet once a week and read a whole book of poetry out loud together each time. a lot of what i was writing through the project of common place felt in parallel conversation with things that came up in the group.

the reading group helped me to make the container i needed to think in a long-form poem format. a piece of making a chapbook of the early work from that manuscript felt like it was about documenting the thinking i was doing, to share with the friends and people i’d been thinking alongside with.

i still feel a little hungover after doing something very procedural in long form – i keep looking for the next sequence of constraints that’ll feel like enough of a container that what my next book will look like becomes clear... but i don’t know if it’s going to actually happen that way, this time. the pandemic really wiped every slate for awhile, and i feel more at a remove in my life than i did before. everything feels like a process of trying to assess what’s going on right now - what's the weather? where am i in it?

Q: What initially prompted you to explore the form of the long poem, and what do you feel you learned through the process? Was there a particular work or works you were going through in your reading group that suggested moving in that direction?

A: most of my work had focused on the short form, and the idea of taking things away – i did (/do) a lot of heavy editing of my poems to pare them down. i wondered about the process of adding more in as a way to get myself thinking about what makes a poem feel finished in a new way. anne boyer did this long sequence called ‘money city sick as fuck’, which was a series of 100 poems she wrote and posted on tumblr in one day – that was a helpful catalyst. we also read alice notley’s descent of alette, and i remember it really fucking me up, both in its style and content.

Q: I suppose you’ve already answered an element of this, but who do you read to reenergize your own work? What particular works can’t you help but return to?

A: julie joosten’s nought, and her deep thinking about cognition and relation. mercedes eng’s work, esp. prison industrial complex explodes. kaie kellough’s magnetic equator. june jordan has a massive collected works called directed by desire – i was in a workshop once taught by alexis pauline gumbs where she used it for bibliomancy, and i’ve returned to that practice a bunch, just opening the book at random to see how jordan changes the landscape. and finally, i’d follow lisa robertson anywhere.