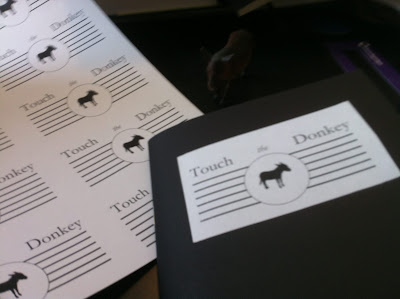 His poems “Jesus, His Jerusalem,” “Dowsing for Water or Divining a Grave / or Vein or Trove            or None” and “Feet & Hands Eyes Voice / Creatures and Angels” appear in the twenty-fifth issue of Touch the Donkey.

A: Looks like Jesus, His Jerusalem is from the point of view of the Publican, one hero of mine. Not that I’m any Biblical scholar. It’s too much to suppose it’s from the POV of the donkey herself—but you never know...

Dowsing demonstrates Burton’s thesis that disappointment is the salt of life.

Let’s bear in mind it’s hard enough to write the damn poems without having to explicate ‘em as well—“The only possible explanation of a poem is another poem.” I think Guy Davenport said that. Or was it Billie Holiday? “Hush, now.”

Feet & Hands was written after flâneuring around the Jardin des Plantes in Paris.

A: Poetry streams, though poems be discrete. Line is a wonderful characteristic not to be wasted, increment of nerve, integer of grace... But these days, actually, paragraphs (though they might not act quite paragraphical) are offering themselves as preferred receptacle for the, um, ectoplasm.

Q: Your response suggests that that your poems are generated through an engagement with shape and sound; is that a fair assessment? How do your poems begin, and what drives them?

A: Art and Craft. Where poetry comes from has always been a mystery to me. Like catching a scent—or becoming smitten; having been taken by surprise, stay alert. I’ve never been prolific. Once your tuning fork hums, that’ll be the supply of art that can’t be faked; then it’s high time to apply the craft—and certainly an earful and a visual treat are two tastes of mine it’s the greatest kick to practice. I never had a teacher—so it’s taking me all my life to figure a modicum. There are complexities. The first and last stroke of luck from which to build was and is a deep sense of poetry, a Sixth, or the heightened sense, or some weird concentration of sense. Then the goal is from that to mold or hew a good read, good to suss, good to look at, good to hear.

Q: You might not, as you say, have had a teacher per se, but I would suspect you’ve had influences. What writers or works have helped you to shape the ways in which you think about writing?

A: To read is everything! Everything happens in writing. And in silence. The first poet: Ernest Dowson. A short hop from fin-de-siècle English Decadents to lazy-ass Beats. A right turn to Anti-Beat Jack Spicer, flaws & all. A mighty corrective via David Jones. High Modernism (upon which I don't really feel there's been any advance). Throwback to Edward Dahlberg. A thing I wish I'd written: Anabase, St.-John Perse, T.S. Eliot lived to translate—Anabasis. Could I write anything half so compelling! Never had a teacher, no, but I salute three Elders: George Johnston, Gael Turnbull, Howard McCord. To name-check particularly influential friends-in-poetry: inaccurate by omission, any such list—necessarily unbalanced. Curtail it. Only caveat: Don't take no wooden nickels.

Q: Despite living and writing, as you’ve claimed, “under the radar,” you’ve published numerous books over the years in multiple countries, from the debut collection Baby Grand (Ilderton ON: Brick Books / Nairn, 1979) to Neckeverse (Newcastle upon Tyne: Galloping Dog Press,1989), Birchard’s Garage (Durham UK: Pig Press, 1991), Twenty Grand (Boston MA: Pressed Wafer, 2003) and Further than the Blood (Pressed Wafer, 2010), to more recent titles such as Hecatomb (Brooklyn NY: Pressed Wafer, 2017) and Aggregate: retrospective (Bristol UK: Shearsman Books, 2018) and Only Seemly (St. John’s NL: Pedlar Press, 2018). How do you feel, over the past forty-odd years, your work has developed, and where do you see your work headed?

A: That phrase, “under the radar,” really only applied to seasons Anne & I stayed in the Shack down near the Montana border in southern Saskatchewan; it had a literal meaning there. Otherwise, I’ve been as much in the world as anyone. I was advised by a wise senior in my teens not to try to publish too soon. Didn’t listen. Nuff said. I was no Boy Wonder. No prizes. (George Johnston said Don’t be a chump. ((Not his words.)) Avoid prize givers. But I could’ve used me some.) In publishers, I just got very, very lucky. Only, our books stubbornly stayed “under the radar.” I don’t care to make it easy to collect my data, no, but we all know full well it’s a-gathering, megabytes at a time where we’d rather it wasn’t. My books, on the other hand, where the true poop actually is, you can trust me on that, would be easy and cheap to collect. There have been so many unsold author’s royalty copies that I’ve actually burned a shitload. Can’t hump boxes of ‘em around everywhere all your days. I hope the contents are a tetch better lately than they were 40 and more years ago. If nothing to crow about. I pledge a slight improvement ahead—but I’m seventy—“under the radar”—like, what are the odds.

Q: How do book-length manuscripts emerge? Is this something that emerges naturally, or have you some kind of loose plan in mind?

A: Shownman was supposed to be much longer. Cold Mine, much longer—though I was happy enough with that. Leo Mirau, much longer. Just serials, I suppose. Grandmother’s Middle Name fell out about right. But Travelling Mercies was supposed to be much more detailed. So wotthehell, they done mostly shrunk. The gods—or convention—dictated that Hecatomb and Only Seemly consist of a hundred bits (or oxen) each. And I thought I had them all okay. But I guess not. Cuz there’s oodles of undistributed copies feeding silverfish and firebrats down the basement. Montcorbier: we’ll see... Right, rob?