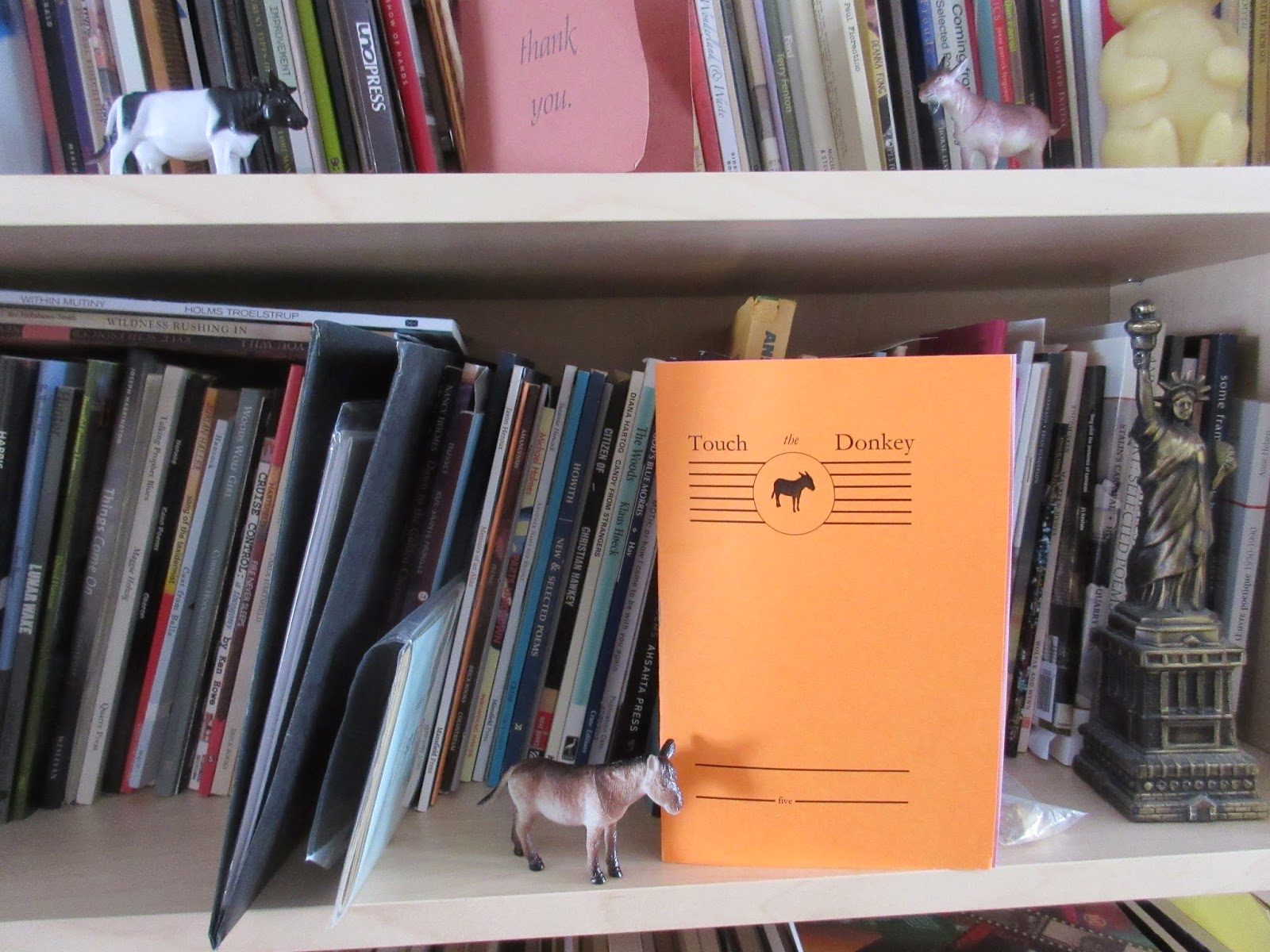 His poems “the art of narrative,” “shepherd” and “dolce” appear in the fifth issue of Touch the Donkey.

Q: One of the first qualities that struck me about your poems is their incredible compactess, as well as their inherent seriality. However small and self-contained each poem may be, they all appear to deeply connect to all the surrounding poems in a very deliberate way. How aware are you of this as you are writing?

A: Thank you for noticing that the poems are compact, and that they have a serial quality. Both are important to me, and it’s gratifying when someone sees those things in the poems.

I’ve always admired serial poems, but it took me a long time to understand how I could write them. Because I believe in absolute freedom in writing, I don’t force myself to write around a subject or theme. I love to write, so of course I write a lot. When I look back over what I’ve written, the most interesting poems invariably group themselves around the same concerns. I don’t think this is mysterious; it seems inevitable that the most vibrant writing would be awakened by what obsesses me most.

Q: Is this how your books are shaped, through a grouping of materials around similar concerns?

Essentially, yes, but it’s messier than that. I usually spend quite a while writing, letting work accumulate, and then a second, separate process is putting a book together. I do want there to be some unity, some seriality, but I don’t use a rigid method. I hope I’m open enough to include pieces that feel right. Probably the most important thing for me is that the writing is allowed to happen “without guidance” and then the shaping of the book is something different—though of course new things can come in.

Q: How do see the poems “the art of narrative,” “shepherd” and “dolce” fitting into each other, or even do they? Or is it too early in their process to get a sense of where they might fit?

A: Those are pieces suggested by movies, now in a file called “cinemetric.” If I happen to write something that seems to relate to the movies, it goes into that file. I’ve been writing these poems for quite a while, and there are quite a few, but the impulse doesn’t feel anywhere near exhausted, so I don’t know what something final might look like, or whether these pieces could fit together in it.

Q: Given your process, how long might a book take to complete, and how many projects might you be working on at any given time?

A: How long it takes to put a book together really varies from project to project. I’ve done some collaborations and those come together more quickly because of the engagement with the other poet. Otherwise, it’s a long process for me—usually several years.

It probably works best for me to work on at least two or three projects simultaneously. If I only have one, I become obsessed, and more than three starts to get complicated.

Q: You mention collaborations, and I know you’ve done more than a couple of them over the years. How did they originally come about, and how do you feel they’ve helped with your solo projects?

A: The first collaboration that I worked on, with Doug MacPherson, became a full-length book, One Hundred Famous Views of Edo. The other two, with Miriam Pirone and Valerie Coulton, became chapbooks, locate and lirio.

The collaboration with Doug grew out of a workshop exercise, and just took off. While Miriam and I were collaborating, she was living in Boston and I was in Barcelona, so everything was done by email. Valerie and I are married to each other and live together, so collaboration is natural, and probably inevitable.

For me, working with another poet creates a welcome sense of urgency, a need to respond quickly, and with that urgency comes a great sense of freedom. Since urgency and freedom are incredibly valuable, the collaborations have helped me enormously in my own work.

Q: After some half dozen publications over the past decade-plus, including two trade collections and a handful of chapbooks, how do you feel your writing has developed? What do you feel you might be heading towards?

A: I try not to look too far ahead, in writing or in life. For me, in writing, the most important thing is to be as engaged as possible in the projects at hand. When I look back at my previous work, I can see how things developed, but I couldn’t have predicted that while the writing was unfolding. For me, engagement in the current projects, and not looking backward or forward, creates a kind of freedom that I need.

Q: I wonder, too: how your work as an editor/publisher, running Apogee Press, might feed or hinder your writing? Do you find the balance difficult to negotiate, or is it entirely natural?

A: I’ve been writing so much longer than I’ve been editing that I’ve never felt any contradiction between the two. By the time I started editing, I’d been writing for a long time, and my practice as a writer had been firmly established. Things might have been different if I had started writing and editing at about the same time. I think that reading manuscripts and working on books, along with teaching creative writing, has helped me as a writer, because all of those things have allowed me to read work as it was coming together, as a process, not just as the finished project—a published book.

A: There are so many that I will surely forget a lot. First of all, Valerie Coulton, who happens also to be my wife. Then Williams and Niedecker, though not necessarily in that order. Kathleen Fraser, who was my teacher, and whose work and example have meant so much to me. Among the great long dead, Shakespeare. I consistently reread all of the poets we’ve published, not just their books with us, but their other work too, for inspiration.
Posted by rob mclennan at 9:37 AM