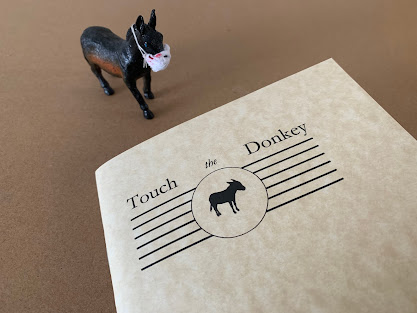 Emily Brandt is the author of FALSEHOOD, as well as three poetry chapbooks: Sleeptalk Or Not At All, ManWorld and Behind Teeth. Her poems have appeared in many journals including BOMB, LitHub, The Recluse, and Washington Square Review, and anthologies including Inheriting the War and Brooklyn Poets Anthology. Her essays appear in Weird Sister and are forthcoming in Electric Gurlesque. Emily is a co-founding editor of No, Dear, curator of the LINEAGE reading series at Wendy’s Subway, and an Instructional Coach at The Boerum Hill School for International Studies in Brooklyn. She’s of Sicilian, Polish and Ukrainian descent.

Her poems “drinking from boredom, a toast to the dead” and “Nothing here today that doesn’t exist yesterday” appear in the thirty-second issue of Touch the Donkey.

Q: Tell me about the poems “drinking from boredom, a toast to the dead” and “Nothing here today that doesn’t exist yesterday.”

A: These two poems are part of a 30 poem series written daily during a month of meditation on Stein’s essay: “Composition As Explanation.” So each poem is, in part, a quotidian reflection on whatever I was doing that day. And in part, a reflection of an embodied process of integrating Stein’s ideas – which to me feel both impenetrable and wildly intuitive.

The first poem of that series (a series which retains the present tense) is “Nothing here today that doesn’t exist yesterday” – a pretty direct correlative to Stein’s essay. On that day, I had a conversation with a young person who told me that I taught him what it means to be a man. This was interesting and sweet to hear, and something I can’t actually take any credit for. But it did reinforce for me a sense both of connection (in the present to this young person, and across time back to Stein) and of ambiguity/simultaneity – a lack of connection to any set interpretation. So in part, what this kid said might be true (we’d had some cool and deep conversations), and in part, it’s not – only he can be credited with his own learning, as we are all offered a constant stream of infinite stimuli and only attend to so many minutiae.

On the day I wrote “drinking from boredom, a toast to the dead” I was, well, drinking from boredom - and fell down a rabbit hole of wondering what happened to cocktail glasses, which used to be commonly seen. So the poem’s a nod to how there is not difference in how life is across time, but in “the way life is conducted.” Here I am, drinking the same drink as ten or twenty years prior, from a different shaped glass. As if shape matters. And it doesn’t.

A: Well, the last few months I haven’t been making poems. I’ve been focused on creating a video about people’s sleep and waking rituals, with support from the video art collective Temp Files.

Q: What prompted this shift from poems to video production?

A: I love making photographs, and though I have less experience with video, I find it really exciting. So I’m thrilled to be back for my second year with the collective. I wouldn't exactly call it a shift from poetry to video art. It’s more pragmatic – we’re on a tight production schedule with Temp Files, and my video goes live in early March. So everything else got put on pause. During Covid, it’s been particularly supportive to work with a true collective – since there has been so much less in-person engagement with poetry communities, this video collective has been a real gift. I think ultimately I approach making a video the same way I approach making poems. But with a lot more equipment.

Q: What do you mean when you say you approach both forms in the same way?

A: I tend to start from an intuitive, meditative space and collect a lot. Then I look for patterns and attend to language to find an intentional and intelligent shape for the piece.

Q: Are these poems part of any larger grouping or thinking? Have you done much writing since the poems included in your full-length collection, FALSEHOOD, for example?

A: Yes! This series is one of three sections in a new manuscript, one which reckons with the ghosts of place. That’s been the bulk of my writing since FALSEHOOD – though I’ve also written some random things and have been dipping in and out of a sonnet series I’ve been working on for a decade now. I’m looking forward to taking some time this spring to write without a particular project in mind and see where that takes me.

Q: With a full-length collection and a handful of chapbooks, how do you feel your work has developed? Where do you see your work headed?

A: That’s maybe a better question for my readers! I can say that for a long while, I felt like I was vacillating between very formal hyper-revised constructions and very intuitive/associative constructions that I was reluctant to revise at all. Now, in my work I feel confident in balancing intuition and precise intention. I’ve done a lot of poem revision and visual art-making in the last two years, and have only drafted five, maybe seven, new poems since the pandemic began. I’m ready to dive back in to writing this late-winter/early-spring, so more on this soon.

A: I recently loved and felt energized by Jennifer Nelson’s Harm Eden, Ted Dodson’s An Orange, and Jordan Abel’s Nishga. I return often to Muriel Rukeyser and William Butler Yeats, because I can’t not, and I read the Tao Te Ching over and over again endlessly.