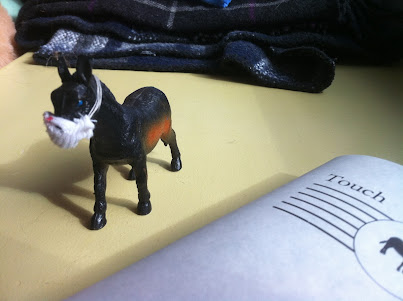 Stephen Brockwell grew up in Montreal and will likely shrink down in Ottawa. He helps run one of Canada’s oldest poetry reading series, Tree, with Brandon Wint and Avonlea Fotheringham. Immune to the Sacred is scheduled for publication in 2022.

His poems “Southern Desert Wind,” “Psalm of the Enemy,” “Theology of Rivers,” “I Become a Migratory Animal,” and “Light Table Psalm” appear in the thirty-first issue of Touch the Donkey.

A: I guess, you know, each poem is its own answer to that question. They’re from a thing tentatively titled Immune to the Sacred, and you can see a little of what I mean by that title in them. They have their own energy, events that put them forward, transitions from notebook to draft. Titles, ideas about a book tend to evolve, for me, from reading the work as it gets written.

Maybe one more thing. I find it dispiriting (I am overusing that word these days) that we—many of the members of our species—are immune to certain sacred, essential things (the bodies and spirits of others, this delicate planet) and simultaneously too easily infected by ideas and beliefs our culture makes sacred: evangelical faith and the faith in human instrumental reason. That's the orbit the book has gravitated into.

A: Well, the four shorter pieces are paired: two half-hearted psalms of a certain kind, and two short reflections on isolation and distance. The middle poem is a little bit of blasphemy I am reasonably certain I will not be damned for.  These are aspects of the experience of the sacred: the beyond-reach nature of the it, the inability to conceive it, and, worse, the inability to unabashedly feel it.

I was wandering in the Fletcher Wildlife Garden off Prince of Wales today: when I gave the place the full attention of all my senses, when I stopped thinking, I could almost grasp the sacred there. I use the word sacred a little carelessly. I mean something worthy of reverence and deep respect—momentary heart-stopping admiration for its mere existence.

I’ll share a few photos I took there. I worry that many of us have lost the ability to experience the overwhelming awe that might halt our trajectory as a doom-bringing species. Mr. Smith is right: we are a—the—virus. Awe is the vaccine for our lack of care; reason is the vaccine for the prevailing western theology that reveres eternal abstractions rather than living presences. Most of us are vaccine refuseniks of one sort or another. 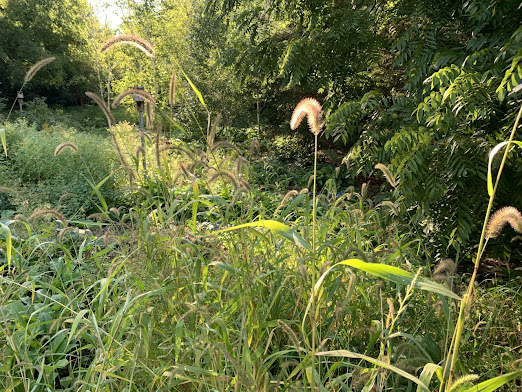 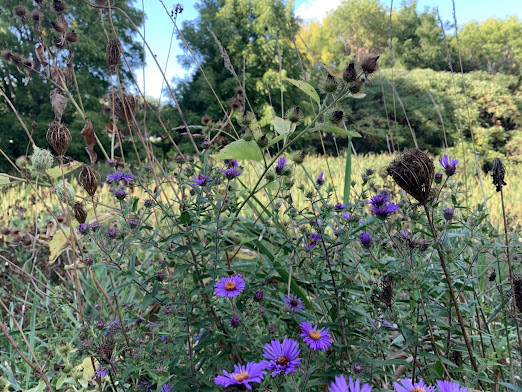 Q: Is this notion of pairing poems something that is common across your work, or did this develop more recently? How do these paired pieces emerge?

A: A lot of poems take shape in clusters. It’s always been that way, as far as I recall. It’s just obsession playing out naturally. I’ve had the psalm idea or variations of it for years.

Q: I’ve always been curious at your suggestions that some of your poems take years to complete. Are these poems emerging out of ideas kicking around the back of your head that you finally write down, or notebook sketches you return to years after originally catching on paper? Or are these poems you are returning to repeatedly throughout a lengthy period?

A: I plod and plod. Plus work. Running my own business for—jeez, it was twelve years, I think. I’m hoping that my new employment will be somewhat less stressful. So far, it is. I am overwhelmed with gratitude that I don’t have to meet payroll during the pandemic. I might not have survived it.

So ... poetry. I’m a plodder. A poem or two may happen and just fall in place like an agreeably-shaped snowflake. Short ones happen that way. But I revisit too often. Little tweaks: add a breath here, take one away, record it, listen, strike-out, reshape. Then there’s the dialog between a poem and its neighbours. I notice threads that should be trimmed here, knotted there, woven.

Q: You say that a poem or two “may happen and just fall into shape,” but how are your other poems constructed? Are you assembling a collage of lines out of notebooks, or do those notebook-elements provide the foundation for a poem you will work to craft to completion?

A: Each poem requests its own rules for composition, I think. I’m purposeful after-the-fact, not in the act.

The Psalms are sonnet-like things. Their companion, more intimate duals or anti-poems are similar in structure but very different in tone.

The notebook is the repo for the draft. Sometimes, it’s prêt-à-manger, other times, the notebook has just a recipe on a scrap of paper with a rough list of ingredients.

Let me give you an example. I’m working on a long piece about GOERT, the Garry Oak Ecosystem Recovery Team and their project to preserve and revitalize these endangered sacred places on Vancouver Island. In my notebook, I have a few scribbles for what a line might look like. But the source is a spreadsheet on the https://goert.ca site. I had some scripts and things that I used to extract certain information. And I’m still in the process (about three years later) of shaping that into a poem that consists of micro poems for the species and their interactions. It’s a long-haul kind of thing. But when I have time to put energy into it, I love that kind of work.

Q: After a handful of poetry and critical titles over the past two decades or so, how do you feel your work has developed? Where do you see your work headed?

A: As strange as it sounds, my first published poems appeared four decades ago, my first book thirty-three. Crazy. Makes me nostalgic. My first book launch was at Gallery 101, I think, the night of one of Ottawa’s most intense earthquakes. I remember riding it out and thinking how interesting the sensation of that kind of jostling was and how it had a pleasing light rumble.

I don’t know if my work has developed. I’m not sure I understand what that means. It’s changed. I’ve become more concerned with the details of sound, the way a sentence grows over lines, the idea of a poem as overhearing. I respond; I don’t seek. I keep finding drafts of things that seem salvageable.

The work is wandering around happily undirected. A few ideas have occurred to me. The most promising one this week concerns naming. Names have enormous power, of course. In the poem “Mouth” that you published a while ago on periodicities, I mentioned the formal chemical name for the protein titin, a little thing you can’t move without. But it's not such a little thing—it’s the longest protein. It’s chemical name (a formula, really) is hundreds of thousands of letters long! Now, someone is going to have another name for it when they patent it—muscolene, or spandene—some commercial moniker to transfer to corporate ownership something your body produces.

This process is being reexamined in beautiful ways. But I think naïve ways. I have to be extremely careful here, because I’m no authority on the politics or linguistics of naming. But! The west has been erasing names for sacred things for so long we've forgotten how violent that is. If an Ojibway teacher were to cross out my names—Stephen Christopher Brockwell, names that shout privilege—with a name for what I am (Ojibway for old fart), how would I know myself? We have done this with purpose as a culture and continue to do it. We insist that others do it by creating a culture of conformity, to make people fit our existing categories. In my old neighbourhood, Langevin Street was renamed to Commanda Way after William Commanda, the leader from Kitigan Zibi Anishinabeg. How thrilling! But notice that the type of road is still English! His first name was William. We can’t think outside naming. I’ve been imagining very tender poems to objects, places, and people that have had, at times, no names, first names, translated names, appropriated names, imaginary past and future names. There are superb poets in our community who modified their names to be pronounceable or carry family names their parents homophonically translated into English.

So, yeah. Names. Fun. You won’t see a thread of the mumbo jumbo I just wrote in the poems, I hope.

A: Great questions! Local, global, newest, oldest. Brandon Wint’s book, Divine Animal, was wonderful. I don’t know quite how he manages to imprint reading instructions in his lineation. You read his poems the way he very carefully performs them. Ren Iwamoto seems to be doing wild, energetic things. She read a poem about body-building, ancestry, gender, sex—it was a singular piece that energized me. Nate Marshall’s latest book Finna is an interesting shift from Wild Hundreds that I found at the Chicago O’Hare airport. Such intelligent, thoughtful, musically diverse, and often deeply sensitive, insightful work. It’s a thrill to read. Working with Avonlea Fotheringham and Brandon Wint on the Tree Reading Series has been an education. The New York poet John Foy’s most recent book, No One Leaves the World Unhurt, is one of the most insightful, haunting, honest books of poetry I’ve read.

An ancient Greek phrase that was on mass-produced jewelry in ancient times has turned out to be from a poem. A lot of early poetry was irreverent, social, and sophisticated. We’ve talked about Catullus, Horace. Wonderful, witty, transgressive stuff. I revisit translations of Horace, struggle to read Francisco de Quevedo, struggle with Villon, Chaucer. I maintain the significance of Monty Python, Benny Hill, The Goonies cannot be understood without Chaucer.

I return to Coleridge. Such a decent, tortured human being. I return to Emily and Walt. I’ve been returning to Dionne Brand, Louise Glück, Erin Mouré, the recently departed Peter van Toorn. This sounds like a terrible name-dropping exercise. It is. But these are the writers I am learning most from.

For some reason—I think it was because Stuart Ross wrote something with 1687 in the title—I tried to return to John Dryden. Couldn’t do it. The music, the authority, the mastery of the lines does nothing for me. But I revisit Stuart Ross for many reasons. Insightful fellow. A meaning-schmeaning kind of guy I respect. I think I get to meaning from schmeaning; it’s important to embrace the schmeaning in a poem.