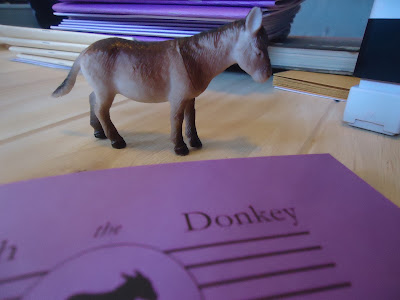 His poem “Steps” appears in the seventeenth issue of Touch the Donkey.

Q: Tell me about the poem “Steps.”

A: Not to make too much of so little…

But I am interested in each word as a creature in itself that has evolved & is evolving even as we show-offs use them.

I want to track social & historical movement using only a creature at a time to see what that minimal focus might reveal.

In the slightest adjustments can be seen enormous affinities & leaps of reference.

These poems are suspicious of the writerly flourish, wary of pop sympathies & prejudices that become tropes.

For instance, using bp’s joke of saints in words—such as St And built from the word “stand,”—one two-step here speaks of how easily we move from what is “unclear”  (Uncle Ar) to what is seen as “unclean” (Uncle An).

The avuncular in criticism still implies that if poems are unclear they are unclean.

A: Whether Steps is a poem or a sequence of poems, we may consider the order of each part or poem & their proximity to each other, as well as their obvious list-isolation.

There is always a relation between the word under the microscope & the word in the field, in the sentence, at the televised debate.

The Other World under the slide—in our tiny poems—has the potential to cure verbiage & lies. I have to believe this, even if it isn’t true anymore, or never was…

I mostly work in sequence forms. These are Spicerian marathons, but the interest I have in proximity as a potential force in such poems is the same as in Steps.

This beside this is not only 1 plus 1—it is tone-change, furtherance (= 3), & a texture shift—or even an irrelevancy that illumes—all of which is not beholden to syntax.

Between sections in a long poem, between single words in one of these Steps poems, (and between the letters in a word if we turn the focus way up), there accumulates (the hope of) a force that is not logical but processional, not telling but assembly.

Q: You’ve been working with the extended suite for some time, working, it would seem, with the book-length poem as your unit of composition. How did you get from writing individual poems to working with such a larger form, and what do you feel you’re able to accomplish through book-length that you might not be able to otherwise?

A: I respect the lone cry of the lyric, but it is rarely pure, & almost always imitative. To be that desperate & alone a cry has to be half crazy.

The cacophony of sequence approaches carnival. The cooperation of chorus involves a displacement of ego. These are good things to invite, so I do.

The book, for me, is a life unit: during these 4 or 5 years, I have invited & welcomed & arranged the following.
All of the preoccupations, distractions, enthusiasms, & revelatory fears of these living years of mine are here…

The book is where the author joins the audience. Maybe I write books so that I can join the audience. The brief silence of being in my own book’s audience is reward enough. A respite.

But soon the next compulsive pull of design & trouble, that lyric desperation, nudges me out of my seat, & I have to find the exit, have to go off on my own again…

I feel again & again the compulsion to invoke, ISBN by ISBN, the fortifications of harmony & pattern.

Q: With over a dozen full-length collections over the past two decades, how do you feel your work has developed? Where do you see your work headed?

A: The first word that comes to mind when I read this question is: landfill.

But that is deflective, morbidly un-funny—& a little interesting: my name is in there…

Hey, I keep looking for that guy! And he keeps looking for legitimacy in polyvocal company.

But the only company I trust is A to Z.

So Steps is (or are) an effort to keep my eye to the microscope of the alphabet.

A: Thirty years ago I painted Greek blue a wall in my bachelor apartment & stuck to it 80 white file cards each holding one of Zukofsky’s 80 Flowers poems so I could study them as part of my daily routine.

No blanch witloof handbound dry / Heart to racks a comb

This winter I spent 6 months in Guyana—what I took & studied again daily there was Zuk’s “A”.
Classical anti-classicism crunched & unraveled into housebound song.

Crunch or unravel, Z gets me every time.