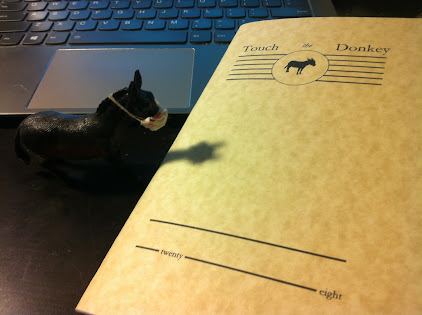 Allyson Paty is the author of three chapbooks, most recently Five O'Clock on the Shore (above/ground press, 2019). Her poems can be found in BOMB, Boston Review, The Brooklyn Rail, jubilat, Kenyon Review Online, The Literary Review, Tin House, the PEN Poetry Series, and elsewhere. She was a 2017 NYSCA/NYFA Artist Fellow in Poetry and a 2017-2018 participant in the Lower Manhattan Cultural Council's Workspace program. With Norah Maki, she is co-founding editor of Singing Saw Press.

Her poems “Along the Grain,” “Decade,” “And Follow It” and “Sleeps of Bronze” appear in the twenty-eighth issue of Touch the Donkey.

A: “Sleeps of Bronze” began with a simple problem: How to describe the feeling of being asleep? In my experience, sleep encompasses rich and varied sensory states, and what sleep introduces to waking life may be a kind of pause, but it’s not empty or blank. In fact, it’s often in falling into and coming out of sleep that my sense of time passing is most physical.

“Along the Grain,” “Decade,” and “And Follow It” are in a suite of poems that attend to porousness. They index various movements through and across, comment on the absorption of information (especially of text and images), and enact shifts between subject pronouns (you/one/I) that happen naturally in everyday speech. I was also interested in making the boundaries between poems more fluid. Certain phrases repeat throughout, ideas and imagery develop across poems, and the last line of “Decade” and “And Follow It” together comprise La Monte Young’s Composition 1960 No. 10, the score for which is “Draw a straight line and follow it” (a famous interpretation is Nam June Paik’s Zen for Head).

A: The language of these poems is spare compared to the poems I’ve been writing recently, which are long-lined and unfold over long sentences rather than clipped phrases.

Q: What prompted the shift?

A: I go back and forth between courting the prosaic and resisting it in poetry. Sometimes full sentences feel spacious and inviting, sometimes they feel too one-directional, and it’s blank space and fragments toward which I’m drawn.

Q: What is it about the blank space and fragment that appeals? What do you feel is possible through such that might not be otherwise?

A: For me, I think it’s a way of making room for the reader in the language. Reticence isn’t always or only withholding; it can be a form of generosity, inviting the reader to think and see and move within the poem. I also use fragments as a way to let language move in more than one direction—a line or phrase can attach to what came before and/or what comes next and/or remain self-contained.

Q: With three chapbooks under your belt, how do you feel your work has developed? Where do you see your work headed?

A: If I only knew! Some of the poems in the chapbooks are part of a larger manuscript that I’ve slowly assembled, demolished, reassembled, and so on, over years. Another longer manuscript in progress is more of a standalone project, in conversation with a particular set of texts. Whatever I do, even when I think I’m making a big formal departure, I seem never to exhaust questions of dailyness, detritus, and the built environment (which includes not only space, but historical and clock time).

Q: Do you have any models for the kinds of poems, the kinds of structures, you’ve been attempting? Are there particular writers or works in the back of your head as you put poems, and later, manuscripts, together?

A: Reading and writing are deeply connected for me; I might even say that my writing is an extension of my reading. Maureen McLane’s response to the prompt “Why I Write...” included, “I write poetry because others wrote poetry.” She gave many other reasons, too, but this one seems to me fundamental. Rarely if ever do I set out to emulate or otherwise react to another poem (or book), and it would be hard to single out just a few examples, yet what I’ve read defines what I write as much as what I’ve lived.

But for this answer not to sound like a dodge, I need to clarify something I just said, that a new manuscript I’m working on is in conversation with a particular set of texts. That manuscript is comprised of two long poems. One uses only words that appear in the opening passages of the 25 most downloaded books on Project Gutenberg, and the other uses only words that appear in the final pages of those same texts. Those books aren’t models but raw materials and a formal constraint.

A: I love rereading! The opportunity to do so is one of the main attractions of teaching. Outside of teaching, what I reread changes. Some of the texts I’ve reread lately are Of Being Dispersed by Simone White, Of Being Numerous by George Oppen, Hello, The Roses by Mei-Mei Bersenbrugge, "The Storyteller" by Walter Benjamin, The Country of Planks / El País de Tablas by Raúl Zurita, The Sri Lankan Loxodrome by Will Alexander, and Revelations of Divine Love by Julian of Norwich. The only books I avoid rereading are those that were important to me as an adolescent, because, lacking adolescent passion but having gained much context, they'll never live up.