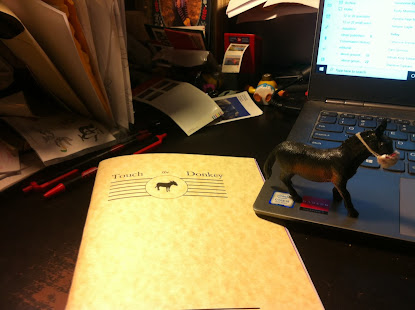 Geoffrey Olsen is a poet and cat guardian living in Brooklyn, NY. He is the author of the chapbook The Deer Havens (above/ground press 2020). Recent poems are published in Deluge, Entropy, Vestiges and The Pi Review. His chapbook, Marrow, is forthcoming from These Signals.

His poems “recedes to soil” and “nerve between song” appear in the twenty-eighth issue of Touch the Donkey.

Q: Tell me about “recedes to soil” and “nerve between song.”

A: I’m going to try to talk about some of what went into these poems for me. It is difficult!

I had set the intention of writing in confined squares with clipped sentences. I was under the influence of P. Inman’s writing, thinking of the one or two word (or even fragments of a single word) “sentences” that appear in his poems. I liked how this density allowed each piece to move in so many directions simultaneously—an intense focus on word that allowed an evasive referentiality to flicker across the poem.

I was also thinking about “landscape” at the time, specifically of the lands near where I live—the lands of the Lenape people—along the Hudson River, both as the present and as a historical continuum. I wanted to write something that remained constrained and denied a feeling of expanse. I felt like I had to follow this urge to counter some sort of gentle, spacious experience of my surroundings. The square form suggested a segment of a grid, one that imposed property line, commodification and death of land. The poems were moving around the presence of settlement—“landscape as corpse”. The short sentences moving rapidly between the environment I was in when I wrote the poem and the references that came into my attention from reading or outside, felt like a means for saturating and short-circuiting the grid—the poem as abundant flowering within constrained space. It suggested for me what was “outside” the square of each poem. Like each poem was just the aperture, focusing the image, but there remains a feeling of continuation outside the aperture. This also is felt always as the tension or edge of failure embodied within writing--that there is so much that overspills the poem, that can't be contained. Both a blissful and a calamitous attention to what goes on through the present.

The idea of Leslie Scalapino’s “seemless anti-landscape” hovered in my mind. I pick up her book R-hu and see I was thinking of the square poems that appear midway through the book. She writes, “it is necessary to be subjectivity/language to be the landscape, though “to be” as thus is not—-yet by that occurring.” Wondering if my poems could hold to that inquiry as intention?

“recedes to soil” refracts around a sort of live/deathscape: I was walking along a creek in the Catskills and I found a skeleton (just the leg and chest bones) of what appeared to be a dog in a small space of rocks just at the edge of the waters. Later, sitting on a rock nearby, I started the poem, thinking of the bones along with the experiences of seeing pigs and horses at an animal sanctuary earlier that day. What emerges for me in that moment (and what happens often for me when I’m writing) is Wadada Leo Smith’s music and his series of suites, Ten Freedom Summers, as moving with my experience in this moment of manifestations of death and life. Music comes through all of these pieces as a sort of stitch across these fragments. Wanting to sketch something along the surge of this music, that is informed by my experience of Smith's music, yet remains outside of the poem. I suppose it ends up being like an echo of another song.

“nerve between song” embodies a similar energy. Trumpet appears among these hopeful expressions (for me) of encountering gentle cows and pigs. That felt social—music moving with this liveliness. It’s there with this sort of nightmare image of my teeth falling out. All of this swirling together like a collective sensation or thought in the action of the poem’s music—nerves between sinews of song.

One thing that troubles me, that I do not know how to resolve with this writing, is the colonial impulse to write about nature—something that recent readings of Ken Belford’s Slick Reckoning and Internodes has illuminated for me. I want for these pieces to hold something similar to what a poet I admire, Nicole Raziya Fong, said in an interview with you about rejecting the colonial impulse: “poetry as maintaining the secrecy of things while also making it extant to others.”

A: Since the start of the pandemic, I’ve been writing a new series at composed at the fuzzy edges of dawn/dusk. When I stopped going out of my apartment in Brooklyn, back in March, I began to write poems at twilight when I could barely see the page in my dark room. That went for through the spring. I stopped writing once the uprisings began following the murder of George Floyd. I felt there was no place for this writing in that moment and paused what I was working on.

I started writing again at the winter solstice, now at dawn instead of twilight. I have not looked back at these dawn poems yet so I do not yet know what they are. I’m writing with very little light—just the blue glow before the sun.

It’s a process from the poems from the series that includes “recedes to soil” and “nerves between song”, written in these constrained squares. I wrote those poems with a feeling of daylight—that everything was illuminated brightly as it passed across the square of the poem. Now I’m writing in the darkness, in the crepuscular shifts of dusk and dawn. My new poems have more anger and more fear too.

Q: Are you finding the differences in these poems exclusively with content and tone, or are you noticing any structural shifts as well? How are these shifts presenting themselves in what you’ve been writing?

A: They are slower poems, unfolding more gradually over the page. I avoid the clipped sentences of the previous work. The “dusk” poems have a less fragmentary syntax than in much of my work, though the “dawn” poems seem to rely more on clusters of words to propel the poems forward. I want to say they are more like lyric poems, but I also do not think that's an effective way to characterize a poem. Maybe they have that particular shape? Structurally, I was also thinking a lot about Larry Eigner’s work and about allowing a horizontal movement of the line on the page at least inspired by his attention to how the line exists in the space of the page. I wanted to leave the constraint of the square from the previous work.

The “dusk” poems are more new, so it’s difficult to say clearly how they operate, because I still do not know. They seem more chaotic to me. I felt like I was drifting into the dusk poems, but writing at dusk has felt more abrupt and incoherent. It's probably reflecting my inner experience of the present right now. More fragmentary and uncertain.

Q: Given your thoughts around Eigner’s lines, have you experimented at all with the size or shape of your page? And what are you discovering through the process? What are you seeing in your poems that might not have been possible otherwise?

A: No, I have always worked with the same size page when writing. I think it becomes about a particular attention to the open space of the page. I’m interested in that as a sort of improvisation—what floats here? What can be allowed to reverberate and continue? What stops suddenly? This approach allows me to learn what dynamics move in a poem that do not necessitate the sentence. What pulse can exist underneath the language? That seems a compelling way to move with one's thinking: underlying music.

I am drawn to the simplicity of working always with basically the same page sizes. But if “nerve between song” and “recedes to soil” were experiments that came from constraining my lines, then perhaps I need to look at how I handle the possibility of the page with other works. I think thereare new lessons to be found in playing with other shapes.

Q: I know composition shifts within page-limits was something in the short-lined long poems of William Carlos Williams, sketching out poems on prescription pads, or bpNichol, working to attempt up to and beyond the boundaries of the physical page via works such as The Martyrology. Is this something you’re exploring purely within the realm of poem-boundary, or are you exploring poem-length as well?

A: I have not been compelled yet to work with an expanded approach to page. I think that I am drawn to play with poem length, but where the individual poem is generated over a duration of time into multiple discrete “poems”. I think it has to do with a relation to the time of writing. Reading through Eigner’s poems, I find myself experiencing all of these (almost) daily poems as part of one or a series of overlapping pieces. Details and forms reappear throughout. So I think for me it’s never been the individual page as where the experiment unfolds, but over a series. Is there a way I can get at the present, over the momentary surfaces of these feelings and awareness, through that practice? Is that political?

C.J. Martin’s recent book novelppl/practicebk has been incredibly inspiring! I read it as a work that’s generated through attention to the daily, deeply intertwined with his reading, his communication and space sharing with others. Reading that book in the start of 2020 gave me a lot of energy for returning to my writing.

But who knows—maybe I should explore other formats? I’m thrilled by Leslie Scalapino’s work with photographs in Crowd and not evening or light and The Tango (and the oversized page in that book as well).

Q: So, is your sense of “duration” one of time over space, then? Or is it more of an interplay between or even through time and space?

A: I like the idea of interplay through and between time and space! I feel like that’s what draws me to poems—that way the poems unfold over the space of the book. How does the writing that moves through the space of a book set it’s own distortions, magnifications, intensities of time? I feel like there’s always the ghost presence of capital and empire vibrating in the poems, so playing with time/space becomes a way to draw out that presence for better or worse. It manifests mostly in how the poems happen, but I do not find answers through the poems.

A: I’m always going back to Alan Davies, Brenda Iijima, Leslie Scalapino, Will Alexander, Roberto Harrison—their writing shaped what poetry could be to me. I cannot do without Kamau Brathwaite’s DS 2: Dreamstories, Alan Davies’ NAME, and Leslie Scalapino’s novel Dahlia’s Iris. Everytime I read these books new aspects emerge. I think of them as books that help me be with the world.