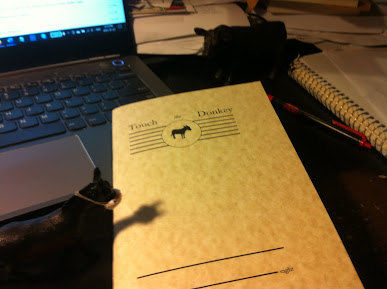 MLA Chernoff (@squelch_bb) is a non-binary Jewish pome machine and a perpetual PhD candidate at The Neoliberal University of York University. They are the author of delet this (Bad Books, 2018) and TERSE THIRSTY (Gap Riot Press, 2019). MLA's first full-length poetry collection, [SQUELCH PROCEDURES], is forthcoming with Gordon Hill Press. They live, laugh, and love in Tkaronto (Treaty 13 territory).

Their poem “So, Thus a Lilith Squelch (For Skin & Eschaton)” appears in the twenty-eighth issue of Touch the Donkey.

Q: Tell me about the poem “So, Thus a Lilith Squelch (For Skin & Eschaton).”

A: I’ve been working on this poem for nearly a decade, which is rather anomalous for me––I usually plunk something out in a day or two and then excitedly scream into the void: “Good mo[u]rning, world, it’s time to submit to and be rejected from large publications!” Nevertheless, “So, Thus” has seen a number of stops and starts over the years because of its sensitive subject matter. It tells, smells, and knells the story of my mother's attempt to steal me away from my bris because she feared our shaky-handed mohel would cut up my tiny baby pee pee real bad.

The poem is ultimately a loving “fuck you” to psychoanalysis that attempts to ask: what makes a Jew? What is a wound? How does the circumcision of a child simultaneously cut them off from a community in the same instance it inducts them into one? How does it cut them off from their body? What does the attempt to steal them from this cut signify, what possibilities could arise from this line of flight? These questions surface in the text through a series of awkward connections I make between eschatology as apocalypse/apokalupsis (disclosure or unveiling) and foreskin; my mother and Lilith (iconic baby-killing badass––a complicated comparison full of joy and sorrow); the cut of the circumcision and the cut that is a comma (according to its etymological root, koptein). I started writing it as a response to Derrida’s meditations on his mother's death in Circumfession, which eventually led me to some really cute scripture, specifically Romans 2:29: “But he is a Jew, which is one inwardly; and circumcision is that of the heart, in the spirit, and not in the letter. Whose praise is not of men, but of God.”

TL;DR: Surprise, surprise! It’s about mommy traumy, Jewishness, and being a frustrated non-binary binch who read Derrida once.

A: It’s very different from the manuscript I’ve been working on since the beginning of the pandemic––a book of visual poems made with Adobe Illustrator. My smooth trauma brain found it very hard to read with so many global crises in the background, which prompted me to return to my favey concrete poets. This inspired me to teach myself new software, with which I began rendering Kabbalistic iconography into weirdo vector graphics. Whereas “So, Thus” uses my own squelchy life as an anchoring point, my vispo is all over the place. It’s almost like constraint-based poetry without any constraint––a permafried succession of ‘pataphysical bleep-bloop click-a-dicks, with my silly ass hovering over the glitchy keyboard of my laptop at 4am, as Illustrator eats up all my RAM until everything crashes and I'm left with the autosaved remnants of my non-Euclidean monstrosities. It’s been very therapeutic, and much more energizing than anything I've ever produced.

Q: There’s a physical expansiveness and collage element to your work that I’ve always liked, something your poetry shares with that of Adeena Karasick, another Canadian poet who explores language, theory and Kabbalistic iconography. How did these impulses develop? Were you aware of Karasick’s work, or had you other models for this kind of approach?

These impulses developed out of a need to multitask and justify doing creative work in the midst of all the hours I was (supposed to be) putting into my academic work. A stalwart guilt complex regarding my knack for procrastination, coupled with horrible imposter syndrome, led me to write my dissertation on Jewish-Canadian poetry, a canon upon which I continuously impose my own work, as a gag. My interest in Jewishness is a kind of poetic anchor that allows me to speculate on 1) my own dang self and genealogy; 2) a wide range of philosophies and socio-political issues (while staying in my lane). I find real hearty inspo in the work of Rachel Zolf, Maria Damon, Gary Barwin, Denise Levertov, Stuart Ross, and Joe Rosenblatt. The wonkiness of this collage-y aesthetic sensibility is rooted in my love for camp and maximalism and… Instagram. As far as a general attentiveness to the explosive possibilities of language goes, other inspiring artists of this calibre include bill bissett, Eric Schmaltz, Dani Spinosa, Kate Siklosi, Donato Mancini, Judith Copithorne, M. NourbeSe Philip, Petra Backonja, Gustauve Morin, Ry Nikonova, bpNichol, Amanda Earl, and others.

Q: I’m curious: were there particular elements you discovered that are specific to Jewish-Canadian poetry? And if so, how do you feel your work fits in or against those elements? How has your work been influenced by your reading and research?

As it stands, there is very little scholarship on Jewish-Canadian poetry (novels get most of the attention), and the existing work is quite dated and written by critics who obsess over multiculturalism and tolerance––bare-minimum concepts that really do nothing to honour difference except allow it to survive, as opposed to thrive. We can do better.

In the meantime, I’ve really learned to value the fact that there is nothing proper to or definitive of “the” Jewish-Canadian poet––there are only Judaisms to-come, poetic communities to-come, and ever-evolving diasporic subjectivities navigating, for better or for worse, the mechanisms of a settler colonial nation. Each writer I study enacts this anticipatory anxiety through a distinct style, and it is precisely style that opens a space in which new ways of remediating the world can be imagined––poetry as the aestheticization of tikkun olam. Ultimately, when I use hyphenation to connect “Jewish” and “Canadian,” I am not interested in the character of a “national literature”––I’m interested in what Canada has done to/for the Jews, and vice-versa, and how this very material relationship plays out in language.

Q: With a couple of chapbooks published-to-date, as well as your forthcoming full-length debut, how do you feel your work has developed? Where do you see your work headed?

A: I’m happy with the free-flowing memetic flarf of delet this and TERSE THIRSTY, and I love the earnestness and anxiety of [SQUELCH PROCEDURES]––it’s absolutely wild that it’s going to be published woweeeeee. I do, however, feel like I’ve been writing the same sappy, esoteric lyric poem over and over again for the past several years, so I’m definitely looking for a change. I want to maintain the trajectory I’m on and eventually hold some kind of vispo exhibit. I love making pieces that feel “frame-worthy.” At the same time, I’m interested in really challenging myself and actually completing one of the many autotheoretical novels I’ve started over the past decade. I’ve been really afraid of prose and the sustained attention it requires, but it’s time for some exposure therapy.

Q: The way you describe the forthcoming full-length against to the chapbooks suggests you work very much in projects, how each of those projects sounds like an entirely self-contained unit. How do manuscripts, whether chapbook-length or full-length, begin? How are they shaped?

A: I’m always working on a manuscript, to some extent. I don’t like writing hermetic poems; it feels cruel. I love Jack Spicer’s assertion that poems are social creatures: “Poems should echo and reecho against each other. They should create resonances. They cannot live alone any more than we can.” I write for specific occasions with a particular theme in mind that I intentionally reiterate, embellish, and reecho in subsequent works.

Q: Finally, and you might have answered a portion of this previously, but who do you read to reenergize your own work? What particular works can’t you help but return to?