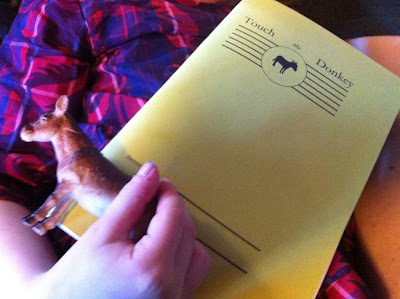 Alyse Knorr is an assistant professor of English at Regis University and, since 2017, co-editor of Switchback Books. Her most recent book of poems, Mega-City Redux, won the 2016 Green Mountains Review Poetry Prize, selected by Olena Kalytiak Davis. She is the author of two other poetry collections, a non-fiction book, and two poetry chapbooks. Her work has appeared in Alaska Quarterly Review, Denver Quarterly, Columbia Poetry Review, The Greensboro Review, and The Cincinnati Review, among others.

Her poems “Alyse Knorr,” “Love Poem to a Scattered Deck of Cards,” “Gratification,” “Progressive Exposure” and “Potentiality” appear in the twenty-third issue of Touch the Donkey.

Q: Tell me about the poems “Alyse Knorr,” “Love Poem to a Scattered Deck of Cards,” “Gratification,” “Progressive Exposure” and “Potentiality.”

A: “Alyse Knorr” is the newest of this bunch—I wrote it using my phone’s predictive text feature and learned a lot about myself and what my phone knows about me in the process. I wrote “Love Poem to a Scattered Deck of Cards” using another digital technology—Google Translate. I started with a poem of mine in English and translated it into another language, then another, then another, again and again until it became much stranger and more interesting. The end of “Gratification” refers to moulins—vertical shafts in glaciers formed by water boring down through the ice. Alaskans really do call them “forever holes,” speaking to the very low survival rate should you happen to fall into one. I learned this fun fact while I was walking around on a glacier during my three years living in Alaska. I wrote “Progressive Exposure” in response to Marianne Moore, attempting to emulate her use of syllabic form and quotations to create interesting tonal shifts and juxtapositions. The source texts for the quotes include Thomas Hardy’s Return of the Native and some self-help books about the fear of flying, a phobia I managed to cure during my time in Alaska—perhaps by replacing my fear of flying with a fear of moulins. Finally, “Potentiality” is about the crisis of identity that can occur during an anxiety spiral, and during the transition onto or off of anti-depressants.

A: The digital technologies I used to compose “Alyse Knorr” and “Love Poem to a Scattered Deck of Cards” are all also used in a chapbook of poems forthcoming from Ethel. All the poems in that project were written by predictive text or voicemail transcription. The dark tone of “Potentiality” and “Gratification,” and the use of source texts in “Progressive Exposure,” are showing up in some of my recent writing about motherhood and gardening, two endeavors that have become inextricably linked in my mind lately, and both of which I keep relating to death.

Q: What do you see as the appeal in utilizing digital technologies for composing poems, and how did this first begin? What do you feel you are able to do through these processes that might not be possible otherwise?

A: I think that predictive text or Google Translate or my phone’s voicemail transcriber can create a strangeness in language that’s similar to the strangeness in, say, a toddler’s use of language. With both digitally produced language and toddler-speak, there’s often a wonderful internal logic clashing with a totally bizarre surprise—and this clash is really impossible to create without the kind of distance that one can have when one is producing language without any meaningful grasp of what it means. For instance, the phrase “You look like a thing and I love you,” which appears in one of my poems, was generated by a machine learning algorithm that was attempting to write pick-up lines. What I love about it is that it does follow the structural logic of pick-up lines: “You look like....” but then adds in the total bizarreness of “a thing” clashed against the sweet sincerity of “and I love you.”

Q: With a handful of chapbooks and a full-length poetry collection over the past few years, how do you feel your work has developed? Where do you see your work headed?

A: The main way my work has developed over the last few years is that I’ve expanded out into other genres. My most recent book, Super Mario Bros. 3, is a work of non-fiction, and I've been publishing some short stories and working on a libretto. Poetically, I think my use of form has grown more intentional over time, and I see it continuing that way into the future.

Q: You mention a chapbook of poems composed and assembled as a grouping of poems similarly constructed. Is assembling a group of poems that share structural concerns or themes your usual process of putting a manuscript together? How do your books and chapbooks get built?

A: I put together my three novels in verse by starting with a set of characters and then following those characters on their journeys. Mega-City Redux, the most linearly narrative of the books, is about Buffy the Vampire Slayer, Xena Warrior Princess, and Special Agent Dana Scully going on a roadtrip together to find a city where women can live safe from misogynistic violence. Copper Mother is about a time-traveling human scientist and a group of aliens visiting Earth, and Annotated Glass is about a character named Alice recovering from a break-up as she re-visits the childhood loss of her sister. My chapbooks have been more linked by theme or form. Alternates follows the same two women through a series of alternate universes, and Epithalamia groups together a series of love poems set in different U.S. states.

Q: I’m curious about your attraction to the form of the novel-in-verse. Why that form over something more straightforwardly narrative, or even a sequence or suite of more narrative lyric poems? What do you feel the form of novel-in-verse allows or provides that might not be possible otherwise?

A: I like the term “novel in verse” because of the inherent hybridity it implies. I also like how the word “novel” connotes a character-driven narrative, which seems to fit my work since it’s so character-focused. When I think of a sequence or series of poems collected in a book-length project, I think of them as being more thematically linked, whereas when I hear the term “novel in verse,” I tend to picture something like Anne Carson’s Autobiography of Red—a more plot and character-driven piece.

A: Actually, Autobiography of Red and Anne Carson in general are always favorites of mine, as are Jack Gilbert, Claudia Rankine, Joy Harjo, and Sappho.
Posted by rob mclennan at 10:00 AM