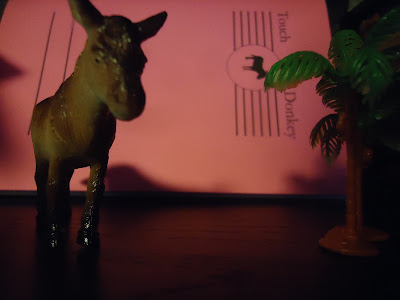 Howie Good is the author of The Loser’s Guide to Street Fighting, winner of the 2017 Lorien Prize for Poetry from Thoughtcrime Press. He co-edits White Knuckle Press with Dale Wisely.

His poems “America Is Running Out of Bomb-Sniffing Dogs,” “Psychotropia,” “The Dark Side of the Moon,” “Carrion” and “Etc.” appear in the eighteenth issue of Touch the Donkey.

Q: Tell me about the poems “America Is Running Out of Bomb-Sniffing Dogs,” “Psychotropia,” “The Dark Side of the Moon,” “Carrion” and “Etc.”

A: The United States is in a bad place – politically, morally, internationally. These prose poems are sort of my snapshots of what it feels like to be living there. If the poems are dark in tone and disjointed in form, it’s because that is the aura of the contemporary American experience.

A: I have written a number of free verse poems, but my main efforts have continued to be directed toward prose poetry, a form I find congenial. The fact that a piece of writing can look like prose, but act like poetry probably suits my ironic sense of life.

Q: Have you any models for this type of work?

A: I first encountered prose poems as a teenager, in Rimbaud’s Illuminations and Baudelaire’s Flowers of Evil. Their prose poems were different than anything I’d ever read before, but being young and dumb, I didn’t understand what that implied. I must have been in college when I came across Robert Bly’s book of prose poems, The Morning Glory. Later I read Bly’s translations of Swedish poet Tomas Transtromer’s prose poems. Reading Bly – who writes in vernacular but often indulges in surreal imagery – gave me the courage to experiment with prose poetry myself. Other poets who have served as guides through the esoteric landscape of prose poetry are Charles Simic and Russell Edson. I’m always on the lookout for poets who write prose poems, but there just aren’t that many of us. Among my recent discoveries is Elizabeth Willis, author of Turneresque.

Q: What do you feel you are able to accomplish via the prose poem that you might not be able to otherwise?

A: The prose poem to me is an example of the concept of detournement. It’s a hijacking of conventional prose for subversive poetic purposes. By “poetic purposes” I mean the carving out of a space for free thought and perception. The prose poem is a bastard form well suited to pushing back against the literary and other stultifying proprieties of the day. At a time when more and more aspects of human experience are subject to commodification, the prose poem remains apart and beyond. It’s a fractured fever dream that disrupts and defies the increasing pressure to conform, sell out, join the team, go along to get along.

Q: With a small handful of chapbooks and a trade collection under your belt, how do you feel your work has developed? Where do you see your work headed?

A: I started out by writing conventional free verse. My patience for not only writing that, but also reading it, has pretty much evaporated. It doesn’t seem to me a helpful way to understand or describe the dislocations of contemporary reality. We need better maps if we are going to ever find our way. I’m trying to create those, which means being open to experimentation, improvisation, chance – poems that are as unpredictable in form or content as life in the 21st century.

Q: How do you feel you are able to maintain that unpredictability while working exclusively in the prose form?

A: A prose poem is unpredictable by its very nature – because it directs prose to behave as if it were poetry. Unpredictability is also a matter of content – which details are included, how I juxtapose the details, what words propel them through the poem and into the consciousness of readers.