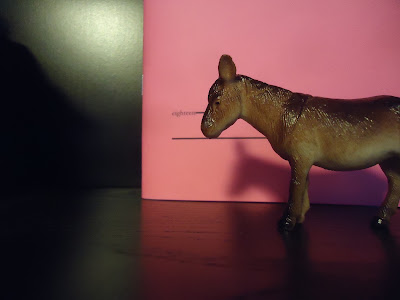 Samuel Ace is a poet, sound and visual artist. Ace is the author of Normal Sex, Home in three days., Don’t wash., and, co-authored with Maureen Seaton, Stealth. He is the winner of the Astraea Lesbian Writers Fund Award and the Firecracker Alternative Book Award in poetry as well as a two-time finalist for the National Poetry Series and the Lambda Literary Award. His work has appeared in Poetry, Fence, Troubling the Line: Genderqueer Poetry and Poetics, Best American Experimental Poetry and many other journals and anthologies. Ace’s first two books will be republished by the Belladonna* Cooperative in 2018 and a new collection, Our Weather Our Sea, is forthcoming from Black Radish Books in early 2019.

His poems “So here it is a crib,” “The cells” and “Where are you hiding” appear in the eighteenth issue of Touch the Donkey.

Q: Tell me about the poems “So here it is a crib,” “The cells” and “Where are you hiding.”

A: In “So here is a crib” and “Where are you hiding,” as in much of my recent work, I am interested in how language intersects with specific moments of daily life. The pieces are fugue-like, using repetition and other sonic/musical elements to create layers of meaning as the poems unfold. I believe that “The cells” does the same, in the context of the hidden and daily violence of incarceration, forced isolation and solitary confinement.

A: They are similar and dissimilar. Most recently, I’ve been working on longer-form poems (https://www.poetryfoundation.org/poetrymagazine/poems/92393/standing-at-a-desk-of-cranberries), that are rangier and not as rhythmically compact. I’m also working on a series of complex sound pieces, with instrumentals, layered language and sampling, based on several of the newer poems.

Q: I’m curious about these experiments with form: is this your usual approach for how a poem begins? And is shape something deliberately decided upon at the beginning, or does it emerge through the process of composition?

A: Poems begin in so many ways, rob. Sometimes in a phrase, a fragment from a notebook, a dream, someone else’s voice, something in the landscape, a memory, a sound. In the night or early morning. On a walk or in something that’s been lingering and worrying me – that needs to be said. Or sometimes simply showing up and waiting with the channels open. I do have forms I go back to. If they serve to lubricate the channels, I stick with them. If they become stale, or a barrier, they need to go.

Q: You mention multiple threads – from longer-form poems to complex sound pieces, alongside the poems included in this current issue – might these threads all end up in the same book-length manuscript, or are they part of entirely different projects? Or do you even think of book-making in such terms? Is the act of composing individual poems even part of the same process as putting together a manuscript?

A: Over time, of course there are multiple threads, voices calling out of the dark. I do have a book (coming out next year from Black Radish), that contains work from the last several years. With the help of a couple of grants, I’ve been creating sound pieces based on many of the poems in that manuscript, and I’m hoping to have an album’s worth by the time the book comes out. I do love the process of forming a book, thinking of it as a whole, how poems relate to and speak to each other. It’s another form in itself.

Q: What is your usual process for putting together a book-length manuscript, and how did it first develop?

A: Up until now, I have not preconceived the form of a book. Although I am aware of many project-based works in the world, my writing thus far has not been generated from an idea or constraint toward a greater whole (not to say that that might happen at some point in the future!). Mostly the writing process happens in the day-to-day, and themes emerge over time. The book itself comes together later as a form unto itself (separate from the writing) by seeing how pieces ultimately relate to each other. It’s not a science. There is chance, and there is a music and a visual rhythm to the process.

Q: With a small handful of titles over the past twenty-plus years, how do you feel your work has developed? Where do you see your work headed?

A: Having lived in the east (Cleveland, New York City, Columbia County in upstate NY), I had never lived anywhere west of Ohio until I moved to Tucson 1997. I thought it was going to be a short stay – maybe two years. But it ended up being a twenty year sojourn that is ongoing. I still consider Tucson my home, although at the moment I am teaching in western Massachusetts at Mount Holyoke College. I’ve coined the term bihomeal – which seems to describe me in more ways than just my physical location. Although I wrote a great deal during my early years in Tucson, I published rarely in the aughts. I should also mention that I began a medical gender transition in 2000. My work has always come from a profoundly physical place – and I attribute my relative silence to the long process of finding home in an extremely unfamiliar landscape, as well as in my body. Coinciding with a deeper sense of place, both in the landscape and in my body, the last ten years have been extremely productive. A few years ago, I was also able to leave a very demanding job – which has freed up a great deal of energy and time. I feel as if my work continues to surprise me. The sound work keeps evolving, and I’m excited to see where it goes.

A: I am constantly reading rob, and constantly inspired. This week I am reading and listening to Douglas Kearney, Ronaldo V. Wilson, Ariana Reines, Sherwin Bitsui, Tracie Morris, Paul Celan, Daniel Borzutsky. I am also reading novels. I recently finished Jesús Carrasco’s Out in the Open, all of Jesmyn Ward, and Jenny Zhang’s linked short stories, Sour Heart.