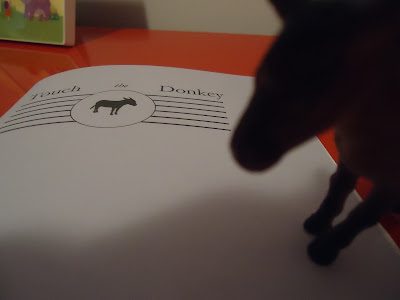 His poems “Automation” and “Capital” appear in the ninth issue of Touch the Donkey.

Q: Tell me about the poems “Automation” and “Capital.”

A: “Automation” & “Capital” are drafts from a larger project entitled The Assembly Line of Babel, a small exhibition hosted by the Niagara Artists Centre (NAC) in the Dennis Tourbin Members Gallery in late summer 2015.

In general, the pieces in this series consider processes of making objects & meaning in a ready-made culture. Reflecting on the relationship between Capitalism, machines, & language, one might argue that linguistic acts which conform to normalized spelling, grammar, & syntax make meaning “automatic.” I see this exhibition as a way of offering a playful intervention into how we think about language, signification & automatization.

Q: How do these pieces, and this project, compare to other pieces you’ve been working on?

A: These pieces, & this project, is in close proximity to much of my published work especially other visual texts like MITSUMI ELEC. CO. LTD.: keyboard poems (above/ground 2013), Pages Loading… (No Press 2014), YOU WILL NEVER AMOUNT TO ANYTHING (No Press 2015). These works emerge as a result of my fascination with machines, & ideas of mapping, process, systems, & materiality. While a chapbook like MITSUMI might be considered as a kind of mapping of the materiality of a writing machine, poems like “Automation” & “Capital” depart from this idea. They are much more about process, construction, & potential.

Q: MITSUMI ELEC. CO. LTD.: keyboard poems was composed, in part, as a response to the work of Paul Dutton. What is it about Dutton’s work that prompted such a response, and how successful do you feel, in hindsight, your response was?

A: MITSUMI might be less of a response & more of a collusion with Paul Dutton’s inimitable The Plastic Typewriter. Both The Plastic Typewriter & Mitsumi share an interest in deconstructing the writing machine & mapping the aesthetic possibilities of a machine in ruin. But there are, of course, various departures in terms of technique: Dutton was able to use the carbon ribbon of the typewriter to transfer the surface of the machine onto the page, for example. Mitsumi required black paint, a scanner, & computer software for the pieces to be rendered––which is perhaps significant in that it symbolizes a submission to the machine itself.

Q: Do you see your work-to-date as a single, ongoing project, simply broken up into smaller parts?

A: Recently published works suggest that there is a single, ongoing project since the concepts at play are closely related––machines, visuality, materiality, & so on. But no, there is no single ongoing project. There are other, unrelated projects dwelling amongst the hard-drives: lyric texts composed during hallucinations; a long poem meditating on ideas of home, locality, & memory; delirious poetic-critiques of spectacle & consumerist culture as well as audio/video collaborations referred to as xenoralities.

Q: I like that your work does have that feel of being interconnected, and yet moves in a diverse range of directions. When creating new work, who have your models been? What writers and works have influenced the ways in which you create work, whether visual or text-based?

A: I consider my network of influences to be quite sprawling. Creatively, I am indebted to a vast number of poets, musicians, artists, mentors, & thinkers. The list seems interminable, but in truncated form, I look to the usual suspects: bill bissett, bpNichol, Judith Copithorne, Steve McCaffery, The Four Horsemen as well as writers such angela rawlings, Lillian Allen, derek beaulieu, Nathalie Stephens, & kaie kellough. I’ve also benefited (& continue to benefit) from the mentorship & support of numerous poets, but especially Gregory Betts, Stephen Cain, & derek beaulieu. All of that being said, I try to locate my work within an expanded field & find stimulation in the work of visual artists such as Kelly Mark & Micah Lexier; producers of house, techno, & IDM; graphic designers & illustrators; academics & para-academics; department stores; street artists; filmmakers; & programmers. With every encounter, I seek to draw out an idea & place it among a constellation of thought within which I try to locate my work.

Q: After a small handful of chapbooks, numerous pieces appearing in journals online and in print, as well as in a variety of gallery shows, how do you feel your work is developing? What do you see yourself working towards?

A: Modular projects––chapbooks, pamphlets, journal publications, & the small gallery––have been my preferred mode of production & dissemination thus far. These have provided an appropriate testing ground for ideas & have assisted in locating myself within a thematic, aesthetic, & political framework (another ongoing process). From here, it makes the most sense to work toward a full-length book project within which I hope to more fully flesh out some of the ideas I currently have in play, but while I do that I must also respond to an impulse to expand my sense of the field & find new ways of thinking, producing, & building.

A: There are texts with which I have a deep affinity: The Sorrow and the Fast of It by Nathalie Stephens (2007), Wide Slumber for Lepidopterists by a.rawlings (2006), & fractal economies by derek beaulieu (2005), each of which I tend to return to when scheming new projects.

That being said, there are so many texts coming out at an accelerated rate & I want to consume them all. There is little time to turn back: read the present, think of the future.
Posted by rob mclennan at 10:02 AM