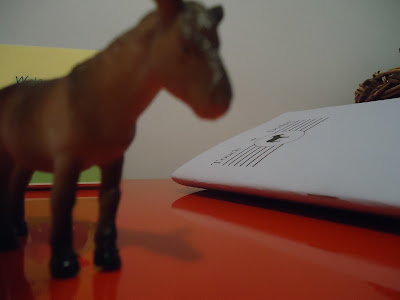 Laura Sims’ fourth collection of poetry, Staying Alive, appeared with Ugly Duckling Presse in 2016. She is the author of three previous poetry books: My god is this a man, Stranger, and Practice, Restraint (Fence Books). Sims has been a co-editor of Instance Press since 2009. She teaches literature and creative writing at NYU-SPS and lives in Brooklyn.

Her poems “Olga, who dresses, “Though I didn’t inter these bodies myself, Olga,” I’ve done my time in the hippodrome, working” and “I’ve been kinda bored” appear in the ninth issue of Touch the Donkey.

Q: Tell me about the poems “Olga, who dresses, “Though I didn’t inter these bodies myself, Olga,” I’ve done my time in the hippodrome, working” and “I’ve been kinda bored.”

A: These poems are part of a series I call “The Olga Poems.” They started in response to spam mail I received from a “Russian Bride” looking for companionship...I don’t have the original message, but something about the language, which was stilted, vaguely sexual, and expressed emotional vulnerability stirred something for me. It wasn’t just the sorrow I felt for this anonymous woman-as-commodity, but also the complexity of emotions I felt toward the man on the other end...who is he? Why is he trying to buy companionship? Why is this something that men are entitled to do? I felt compelled to explore this murky area of human experience (I like murky areas of human experience). The speaker’s voice, which is the voice of the man, kind of popped out of me and I ran with it.

Q: In your “12 or 20 questions” interview, you said: “Usually a new direction for my work starts suddenly—I write a poem, and it’s somehow different, and then if I write a few more like it, I recognize that it’s building into something larger. Right now I’m writing poems in a voice that takes me over—so the voice is dictating this new direction, this new series. Whenever that voice quiets, I’ll be done.” Was that in reference to the current project? And is this a normal part of any new project, catching a particular voice and seeing where it might take you?

A: Yes, that was in reference to the current project, though this project (the Olgas) is on hold for now. I kind of lost the thread of it somehow, and got distracted by something else. Newer work. I’m not sure at this point if the Olga voice has “quieted” for good, or if it’s only a temporary pause. I would like to keep writing the Olgas if I’m able. I’m not sure “catching a particular voice” is a normal part of every project for me, though. Sometimes it starts with an image or a line (overheard or read), and if it continues I follow it, so I guess the impetus is not always the voice. But that particular series, the Olga series, was/is definitely voice-driven.

Q: What is it about book-length composition that appeals to you? Is this something that you deliberately work with your poems, or something that simply evolves as your projects build?

A: I’m not sure. I like the idea of the fullness of exploration the book-length composition allows you...that you can take a thing and look at it from so many sides, or explore a voice, a persona, an idea in depth. It’s immensely satisfying. I didn’t write this way when I was younger, but after I published my first book, I think I started to see that it was possible to publish books (hallelujah!), so I began to write towards that end...rather than seeing what I wrote as discrete pieces, I began to see them as part of a larger whole.

Q: Have you had any models for your book-length projects, or have you simply felt your way intuitively through composition? And would you ever return to single, stand-alone poems, or might such a thing no longer be possible?

A: It seems to be the way of many poets now, so although I can’t identify specific models right now, they are legion! I think of it as being intuitive on my part, but I’m certain the zeitgeist has had some effect. And it’s certainly possible I would return to the single, stand-alone poem, though it would feel weird at this point. Perhaps that’s merely force of habit? It’s hard to say.

Q: After four trade collections and your current work-in-progress, how do you feel your work has developed?

A: In the last two years or so, my work has changed quite drastically (from my perspective). I’m interested in doing new things with the line, in loosening my grip on the line and being more forthright (in a twisted way) than abstract or elliptical. Maybe it’s a mid-life crisis, I dunno. I’ve been writing some fiction, and I always read a lot of fiction and non-fiction, so that is surely influencing my poetry, too.

Q: I’m curious about the idea of loosening your grip on the line. Can you expand upon that? Do you worry your lines were becoming too constrained?

A: I guess I just tired of being so constrained. Loosening my grip on the line means letting things be less mediated, less perfected—letting raw emotions and thoughts break through, and (more importantly) letting them stay where they are, as they are. Playing with rhythm and rhyme, using less severe line breaks, being more playful in general. Letting my sense of humor show. I’ve been so serious! Though again, this is from my perspective, and an outside reader might not perceive such a change. Though after I’d read my new poems aloud the other night, I said to someone in the audience afterward that I felt the poems I’d read were “very different for me,” and he said, “They sure are!”

A: These days I keep returning to Berrigan’s Sonnets and Berryman’s Dream Songs for this “new” way of writing and being in the line. “I can’t help but return to” the poets in my course packet, because I’m teaching them...and they’ve been teaching me and energizing me in return: Frank O’Hara, Maggie Nelson, Bhanu Kapil, Claudia Rankine, Russell Edson, Gregory Pardlo, Wanda Coleman, James Wright, Cathy Park Hong...and many others.
Posted by rob mclennan at 10:32 AM