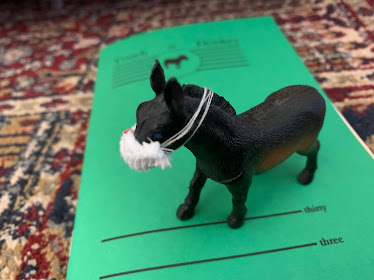 Genevieve Kaplan is the author of (aviary) (Veliz Books, 2020); In the ice house (Red Hen Press, 2011); and four chapbooks, most recently I exit the hallway and turn right (above/ground press, 2020), with a further, Felines, which sounds like feelings (above/ground press) out very soon. Her poems can be found in Posit, Tinfish, Faultline, Oversound, and other journals. She lives in southern California where she edits the Toad Press International chapbook series, publishing contemporary translations of poetry and prose.

Her poems “On cereals,” “The wonder of the eater,” “The problem of the eater” and “Do not feed the animals” appear in the thirty-third issue of Touch the Donkey.

Q: Tell me about the poems “On cereals,” “The wonder of the eater,” “The problem of the eater” and “Do not feed the animals.”

A: I am interested in the problem – and wonder – of consumption. Certainly the pandemic has highlighted and changed our patterns of consumption, and in these poems I was thinking particularly about food: what we need, what we want, how we get it, how we respond to it, its complications.

These are some of the food-related poems I drafted during early Covid-19 lockdowns. Thinking and writing about food – reading recipes, watching Top Chef, making inventories of items in the fridge, listing excesses (and scarcities)– felt like a kind of release from the uncertainty of the pandemic. Food is so tactile and sensory and universal and pleasurable! I thought/hoped that writing food-related poems would be fun and pleasurable and would help ease pandemic funk. Though you can see in these poems, there’s still kind of an underscore of funk.

I actually drafted a few poems titled “The problem of the eater,” as there are so many potential fraughtnesses surrounding the act of eating. The one you’ve selected for Touch the Donkey is one I really like – reading it now, I am still drawn to these seemingly straightforward “sauces” that are “glorious” but can’t be wholly celebrated.

A: I tend to be most comfortable writing observational poems, poems that interrogate spaces and relationships and logistical arrangements (see, for example, my recent poems in Posit or Can we have our ball back? Of the poems you selected for Touch the Donkey, “Do not feed the animals” feels in my comfort zone, but the others—particularly “On Cereals” and “The wonder of the eater”—come from different, less intuitive places. This, I’m sure, is partially because they were borne out of my specific intention, to write about food. Writing “On Cereals” also invited me to dig into memory and my history of food allergies; writing in conversation with my memories or personal experiences is fairly uncharacteristic for me.

Q: What, if anything, is prompting this recent move to work beyond your usual comfort zone and into more personal experiences? Have you noticed a shift at all in the poems as a result?

A: Hmm. I suspect Covid-related isolations, combined with the increased focus on the health of the body (as a society, we were all suddenly thinking more about how to keep our bodies safe, and considering how our bodies—just by being present in a shared space—could be creating dangers for others) contributed to this shift inward. Certainly during this period I became aware of thinking about my body not just as a something I inhabit, but also as a something at stake. I was reminded of other times, and other ways, when my body had seemed othered or beyond my control, which felt useful to think about through poems.

In poems, I always want to push beyond my comfort zone! When I’m drafting or writing I’m not always able to articulate to myself where that shift should take place, but later, during the revision process, I’m always thinking about how to move somewhere new in a poem, how to find a different angle or perspective or action.

I’m not sure that I’m totally comfortable with “On Cereals” in its final state here – the poem feels like a shift in its couplet organization, its breaking punctuation, its leaps in time. My sense is that Touch the Donkey is a safe, engaging place to share poems that feel a little risky, which means it’s also a journal that I’m especially grateful for.

Q: Are there any particular models for the kinds of work you’ve been attempting? Have you any particular authors or works in the back of your head as you write?

A: I started these poems while I was reading journals and anthologies pretty widely. Some of the journals I love and turn to frequently to look for cool new poems are The Rumpus, Ethel Zine, Waxwing, Conjunctions, Sugar House Review, Dream Pop Press…. I find I especially like reading smaller journals – like Touch the Donkey – which often feel like venues that are willing and able to take some more risks in the writing they present. In terms of poets whose work particularly spoke to me during this period, I think of Matthew Olzmann, Cintia Santana, Brian Teare, and Mónica de la Torre. Right before the pandemic began, one of my students had introduced our class (and me!) to the poet Yone Naguchi, and his work became really interesting for me to explore – I became curious to dig into how his work deals with complexity and simplification and shifting repetitions.

Q: With two published poetry collections, as well as a small handful of chapbooks, how do you feel your work has developed? Where do you see your work heading?

A: In some ways my second full-length collection (aviary) was a reaction to publishing my first book. I started writing the poems in (aviary) when In the ice house had just come out and I was doing a lot of readings. At these readings, I realized that writing so many short, spare poems (as I did in that first book) meant that as a reader standing in front of audience, I suddenly had to do a lot of work—and a lot of talking! In the poems that later became (aviary), one of my goals was to write longer poems, to fill the page with words, and to write poems to would specifically resonate off the page and into the room as I read them aloud.

I’m not sure that this kind of deliberate contrast is something I’ll continue in future book projects, but I can say that I’m always excited to do something new, or at least that feels new to me. If I’m not surprising myself as a writer—in the subjects or projects I take on, in the modes or methods of my writing—, then I feel like I’m not trying hard enough.

One thing I love about chapbooks is how they often remain outside conventional publishing practice. I mean, they’re not sold in most bookstores, they don’t often have ISBNs, they can be beautiful and tangible book objects, or they can be inexpensively and quickly produced. I think of chapbooks as excellent venues for veering off a traditional path, for trying new things, and for re-thinking the unit of the project or poem.

I imagine my poetic work will continue to head in many directions. I can’t predict what type of writing I’ll be interested in years from now, but I do know that I’ll continue to write new poems, keep surprising myself and my readers, push myself to try varying forms, subjects, and modes, and continue exploring what a poem—and what a chapbook, what a full-length collection of poems—can be.

Q: It sounds as though you have different structural ideas for collections depending on their potential size, whether the chapbook-length or the full-length. How much of the shape of a structure emerges before a piece or manuscript is written? And would you consider folding chapbook-length works into larger collections, or might that contradict?

A: My general process is that I draft a lot, and I like to explore different forms and presentational possibilities in my drafting. Later, once I’ve gathered a group of poems that feel done-ish, and perhaps similar in theme or structure or approach, I look to see what might belong together, how one poem might fit with another and become something more. I might have a general topic or premise in mind early in my writing process, but I tend not to write toward a project or mode. Instead, I find the through-line later. Even with I exit the hallway and turn right, my 2020 chapbook with above/ground, which consists of a single long poem, I didn’t have any idea during the writing process what form those lines might ultimately take. It was only after I’d finished drafting those pages and pages that I thought about how to best present the lines; it was later on that I realized I might create visual hallways for readers to walk down, and that what I’d written made the most sense as a single long poem. I suspect that if I’d had the form (a chapbook, one long poem, narrow lines, harsh enjambments, etc.) in mind while I was drafting, the poem would have turned out like something else entirely.

I love thinking about books and the various forms that books—and poems—can take! I want to reject a hierarchy of importance, like thinking a full-length book is necessarily “better” or more fully formed than a smaller book or chapbook. Instead, I am glad for some poems or small collections to exist on the edge, in the more ephemeral and informal space of the chapbook or artist’s book. A different expectation from and experience with the reader can be created when poems are encountered in more varied forms. As a writer, too, I appreciate the freedom of thinking that not everything needs to be a book, not everything needs to be a chapbook, certainly not everything needs to even be published or read. That said, I also am excited about the possibilities of an evolution—I certainly think that a collection that first appeared as a chapbook could later transform and be read differently when folded into a larger book, or when presented in another, unexpected form.

A: Some of my touchstone poets are Marianne Moore, Gwendolyn Brooks, Wallace Stevens, e e cummings, Emily Dickinson…. These are poets whose work, their sense of form and language and movement, often feels surprising to me, so I choose their poems and other writings to return to when I’m feeling a little poetically lost. I also love reading contemporary writers! When I’m perusing literary journals, or—let’s be honest, the internet—I almost always linger on poems by Mary Ruefle, Sawako Nakayasu, Vievee Francis, Vi Khi Nao, and Lisa Robertson. I’m fascinated by these poets, who often seem to be working on projects that are larger, deeper, or more complex than a single poem; at the same time, they remain very attentive to the poem on the micro level: the word, the line, the potential for strangeness. I find energy and inspiration in tracing how these poets might be thinking through both these macro- and micro- levels simultaneously.