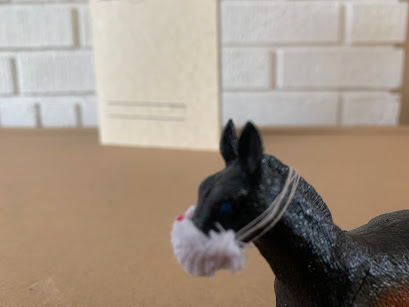 Nate Logan is the author of Small Town (The Magnificent Field, 2021), Inside the Golden Days of Missing You (Magic Helicopter Press, 2019) and Apricot (above/ground press, 2022). He teaches at Franklin College and Marian University.

His poems “I Can Feel Evil Creeping In,” “Self-Portrait at 37” and “Arbor Day” appear in the thirty-second issue of Touch the Donkey.

“I Can Feel Evil Creeping In”: This poem is for my friend and fellow poet, Jessie Janeshek. While I borrowed the title from a song, something is usually creeping in in Jessie’s poems, which I enjoy. “James Dean” was on the cover of her last chapbook, Channel U, and is one of the few famous Hoosiers who isn’t embarrassing.

“Arbor Day”: To my knowledge no one has written a poem about Arbor Day, so I thought I’d be the first. Thanksgiving, Christmas...these days have enough.

A: In terms of form I’d say they’re right in line. I’ve been in a prose poem mode for a little over a year now.

Q: What prompted you into this stretch of the prose poem? And what is it about the form that appeals? What do you feel the prose poem provides or allows that might not be possible otherwise?

A: I’d been writing prose poems since graduate school, but only occasionally. Post the publication of my first book, I noticed that I’d written a handful of prose poems that were yet to be collected. I read some classics in the genre (e.g. Charles Simic’s The World Doesn’t End) and consciously decided to attempt to write enough of them for another manuscript (which I have!). It was also during this time I was introduced to the work of Lesle Lewis, which has nudged me into a longer term relationship with the form than I initially planned. I may never go back.

A lot of my feelings on the prose poem can be summed up in this quote by James Tate:

“The prose poem has its own means of seduction. For one thing, the deceptively simple packaging: the paragraph. People generally do not run for cover when confronted with a paragraph or two. The paragraph says to them: I won’t take much of your time, and, if you don’t mind me saying so, I am not known to be arcane, obtuse, precious, or high-fallutin’. Come on in...”

Q: Is there a difference in the way you approach the prose poem against any other particular form? What is it that you think the form provides?

A: I’d say the only difference is that I follow all the rules: the prose poem is one paragraph (or more) composed of complete sentences. I bend with other forms. For example, I’d keep a sonnet at 14 lines, but ditch the iambic pentameter and rhyme scheme.

As for what the form provides, I think the prose poem expands the possibilities of what poetry can be. And because its hallmark is forgetting the tool of line break in the garage, it will always be inherently subversive, which surely appeals to the poetically-inclined.

Q: With a handful of published poetry chapbooks and a trade collection under your belt, how do you feel your work has developed? Where do you see your work headed?

A: I think the only thing I can say for sure is that the poems are “better,” more complete, require less revision, etc. When I first started writing seriously, I often shoehorned my waking life into the work; my poems started getting better after I cut that stuff out.

I see more prose poems in the future. Maybe I’ll try a long one.

Q: Have you any particular models for the kinds of work you’ve been attempting lately, whether specific authors or works?

A: Lately, I’ve been returning to Lesle Lewis and James Tate. I particularly love the surprise, the jumps that happen from sentence to sentence in Lewis’s poetry. And the narrative impulse in Tate’s prose poems, always charming, is something I usually find myself leaning toward.

A: I’m going to sound like a broken record, but reading James Tate always puts some zip in my step (Distance from Loved Ones is a favorite). Michael Earl Craig’s work I’ve loved since graduate school and keep revisiting. Every autumn I reread Joy Williams (the season just feels appropriate). If I ever run for election, making Jennifer L. Knox’s “Hot Ass Poem” required reading will be my first campaign promise.