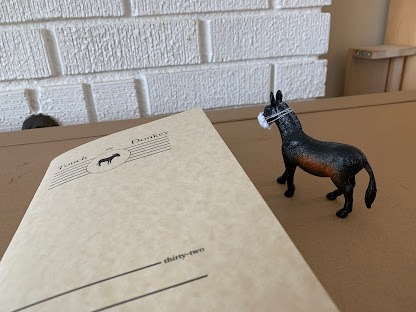 Carrie Hunter received her MFA/MA in the Poetics program at New College of California, was on the editorial board of Black Radish Books, and for 11 years, edited the chapbook press, ypolita press. She has published around 15 chapbooks and has two books out with Black Radish Books, The Incompossible and Orphan Machines, and a third full length, Vibratory Milieu, out with Nightboat Books. She lives in San Francisco and teaches ESL.

Her poems “The Chorus of Condemnatory Shrieks from the Entourage,” “Less Hygiene, But More Spirit,” “Back to the Dollhouse,” “Primness of Outline,” “And the Woman with Orange Pink Hair Stood Silently By” and “The Pugilists Have Returned to Their Corners” appear in the thirty-second issue of Touch the Donkey.

Q: Tell me about the poems “The Chorus of Condemnatory Shrieks from the Entourage,” “Less Hygiene, But More Spirit,” “Back to the Dollhouse,” “Primness of Outline,” “And the Woman with Orange Pink Hair Stood Silently By” and “The Pugilists Have Returned to Their Corners.”

A: These poems are all from a series based on reading and engaging with John Ashbery’s Flowchart, sometimes analyzing how one writes such a long extended poem, and sometimes just responding to his lines. The titles of these poems are all lines from Ashbery. Later, I started collaging in lines from Marthe Reed’s posthumously published Ark Hive, which is such a great ecopoetic-focused memoir. Mixing in Marthe Reed’s lines with writing on Ashbery started when some of us did a Dusie chapbook exchange in honor of Marthe Reed, which was read at the New Orleans Poetry Festival in 2019.  This chapbook, called The Hyperobjective Marthe Reed, used words and lines from her essay “‘Somewhere Inbetween’: Speaking-Through Contiguity” from the book she co-edited with Linda Russo called Counter-Desecration: A Glossary for Writing Within the Anthropocene. After that chapbook was done, I continued on, using lines from Ark Hive (this section is where the poems in Touch the Donkey come from), and which will comprise a second chapbook from the series, called All Gabled Roofs Will Fall, forthcoming from Smooth Friend press in the distant or near future.

A: These pieces are closer in form to the poems in my Black Radish Book Orphan Machines, which used a more abstract form, whereas other poems I’ve been writing lately are more accessible, and quirky maybe. The other project I’ve been doing is reading random news sources or Twitter late at night, and writing one line responses (in some cases you might call it subtweeting) and then pasting the lines into prose poems. They are sometimes funny and definitely more accessible, with a lot of references to COVID and the new language that’s evolved due to the pandemic. They may look and feel more like my other Black Radish Book project The Incompossible, which were all prose poems as well. I’ve been noticing as I age, that my writing has different modes that are starting to repeat. I guess my third mode might be my Vibratory Milieu mode (out with Nightboat Books) which is a long-form collage piece. I’m starting to work on another long collage project, but it is very new, and I’m not sure how it will evolve.

Q: Given the structural echoes you are beginning to see in your book-length projects, have you begun to consider your work as a series of discrete and distinct threads, a sequence of self-contained projects, or as a singular, ongoing project?

A: I don’t think they are self-contained as I’m always writing through different projects, yet not really singular since there are different modes. The idea of discrete and distinct threads appeals though. Malcolm Curtis asked a similar question in an interview for his online journal talking about strawberries all of the time, and I wrote something like I always see my poetry projects as really different, but others have told me that they see all my projects to be in a very distinctive voice.

Q: With three full-length collections and over a dozen chapbooks published-to-date, how do you feel your work has progressed? Where do you see your work headed?

A: It took quite a while to figure out my voice and how to use it better as a poet, but now I feel like it is time to go in a new direction, whatever that might be. I’ve been thinking about evolving my poetry collage style into a paragraph collage style, since all my friends are writing prose now, yet prose is not at all natural to me. On the other hand, to further refine and go deeper into my style, and just watching and observing how it naturally develops over time is also appealing. My favorite thing about writing poetry is the surprise of seeing what comes and what evolves and changes form over time.

Q: What is it about the collage style that appeals? What do you feel is possible through working collage that might not be possible otherwise?

A: I think it has worked well with my particular daydreamy ADD brain. Even when I’m writing in a journal just for myself, sentence to sentence, it is not a straight narrative, it jumps around, one sentence will be completely unrelated to the previous sentence. So the collage technique works really well for me. I’m unsure if this poetic technique has changed the way I think, or if I've always been this way, and it just finally matched up. It seems to me a truer picture of reality, of my reality, and so working with collage makes what is reality to me more visible.

Q: I’m curious about your interest in John Ashbery’s work generally, and his Flowchart specifically. What is it that first prompted you to engage with Ashbery’s work at all, and this particular project, and in such a way? And what do you feel you’ve discovered, if at all, about either Ashbery’s work or your own through the process?

A: For a while, I was doing reading/writing projects that entailed writing to/from/around books that I wanted to read, as a way of reading them. I started a trilogy Tumblr blog in order to read The Divine Comedy (although yet unfinished). After that I started writing around Ashbery’s Flowchart as a way of reading it. As an “experimental” poet, I was drawn to the way that Ashbery was “experimental,” yet accepted in the mainstream, which most of us are not.

What I love the most about Ashbery is the difficult, abstract quality of a lot of his work, and I love that he was possibly a nonlinear thinker like I am, which was largely why I wanted to read Flowchart. As I’ve read through Flowchart though, I’ve started liking him a bit less, not because of his poetry, which I love, but I started feeling less and less connected to him as a person/personality. I love him for his difficulty, as I said above, but he was in a much more privileged position in the world than I am, quite middle-class bourgeois, which, although I am white, as an adjunct and a woman (and not famous), I don’t quite occupy or fit into the same place in the world that he did. I realize it was a different era when he was writing, but it is also simultaneously surprising that he was so conservative in a certain way that comes across in the poetry. He also became something of a more bourgeois gatekeeper type at some point, which I can’t imagine happening in my own life. “Gatekeeper kept out by the gatekeeper.”* These sorts of privileged experiences of his also lends a sort of detached air. “If you want to know Ashbery’s solution to all your pain,/ it is ‘atmospheres and easy repose.’”*

There is also a point in reading Ashbery, when one comes to see his “difficulty” as really just a trick, and not actually difficult at all. I think I also got this idea from reading a biography of his early life (Karin Roffman’s The Songs We Know Best) in which he's described as writing in journals, but writing everything in code, to keep the fact that he was gay hidden from his mother, who he knew was reading his journals! “All he’s doing is obscuring who and what he’s talking about. It’s not actually difficult if those subjects were there, so his difficulty is just a trick.”* His patriarchal ongoingness also started to bother me, as a sort of literary manspreading, yet I am also writing an ongoingness in response, and my manuscript is now over 150 pages! But in response to that aversion of mine, I have started inserting quotes from women poets, Marthe Reed, Leslie Scalapino, and Lyn Hejinian.

So the project has become somewhat arbitrarily legible, much like I feel erasure projects become, where one wonders if the poet is erasing the author because they love them or because they hate them, and maybe it's a little bit of both.

* quotes from my still untitled long poem on and after Ashbery’s Flowchart.

A: I’m going through something where I’m no longer motivated to read just for the sake of keeping up with the new, the old, and the canonical, but inspired by what you said, to reenergize myself through returning to works I’ve loved in the past. I’m thinking of Lisa Robertson, Theresa Hak Kyung Cha, Lyn Hejininan, Leslie Scalapino, kari edwards, Mei-mei Berssenbrugge, Brenda Hillman, Rachel Blau Duplessis, Alice Notley, H.D., Emily Dickinson, Oppen, Joyce, and Orwell.