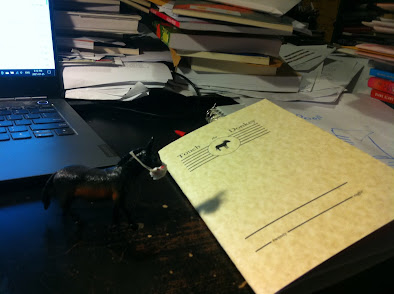 Hamish Ballantyne is a poet from Vancouver Island. He works seasonally as a mushroom picker and as a mental health worker the rest of the year. He recently published Imitation Crab (KFB) and is translating Luis de Góngora’s Solitudes.

His sequence “from BLUE KNIGHT” appears in the twenty-eighth issue of Touch the Donkey.

Q: Tell me about “BLUE KNIGHT.”

A: The blue knight is a type of mushroom. Without value but very beautiful and hard as a bullet, I’ve only ever found it by accident, frequenting the sort of forests (second growth douglas fir, pine, deep moss or kinnickinic on the ground) one frequents to find the (extremely valuable) pine mushroom. Last fall I started to think about the name blue knight after finding one on a freezing, hungover day. “BLUE KNIGHT” is about sasquatches and all the disappearances that inhere there. It’s about the search, the absurd imagination of an end introduced in the act of circling (like a dying chicken). When you try so hard to find something its image is waiting behind your eyelids whenever you blink. And the act of turning your head to finally find it—this is the very same as turning to find someone already staring at you. Terrible expectancy! So singular an intention conjures a counter-intention. I thought a lot about faith while I was writing the book, the dreadful risk of trying to pursue a thought—the irrevocability of such pursuit. The book is about someone writing themself into a text and dying there. I work in a homeless shelter type place; one of the people that lives there, Greg, a very, very tall man, he recently passed on, used to spend his days lying on a bench in the lobby, cutting deals with passersby for smokes and coffee and idly writing. Every evening I had to clean the lobby and when Greg was around I often found little notes he left on the bench. They were always letters he wrote to an alter-ego or himself, elaborate documents tracing mythical ancestries and negotiating the purchase of his various identities. Characters from old TV shows, historical warlords, pharaohs, etc. I’d been thinking about this book for a few months when one evening I was mopping the lobby and I found a poem he wrote. I asked if I could keep it, and later after I brought it home in my backpack I realized that on the flip side of the paper in huge letters he’d written the title, “BLUE KNIGHT.” So there again you have the name.

Q: How does this work compare to some of the other writing you’ve been doing lately?

A: The substrate for this collection comes from a time I wrote every night while I was incredibly tired, after long days mushroom picking  in the height of summer in Northern BC—a lot of the images come from that although the poems are a couple years and many reworkings removed from what those writings were. the form also has roots there--I fell asleep a lot of nights in the middle of writing those poems so they look pretty wild in the original, lots of letters that blast off the side of the page etc. I guess the extant quality of exhaustion is in the tallness of the poems, a line break every one or two words. these poems express thoughts based in conversations and attitudes developed over periods of doing work in the bush. writing is normally very circumstantial for me. accidents and idiocy are important touchpoints. my practice prior to this book was to read a lot for a few days and then stage an unbearable hangover, then go sit with a friend and write. this writing in “BLUE KNIGHT” is definitely idiotic but I worry it's a little too on the nose, lately I’m trying to slink back to my incoherence.

Q: Is reworking older writing a normal part of your process? Is it a matter of seeing those pieces with new eyes, or are you completely reassembling into new pieces?

A: Yeah, a big part of the process. I usually write things down by hand in a pretty haphazard way, when I’m out and about, working, taking the bus, walking around, in margins of books I’m reading or in a notebook, and then work them over weeks and months. It’s not so much new eyes as accruing a mass of material sufficient to loop through and make connections I didn’t expect.

Q: Do you have any models for the kinds of work you’ve been attempting? What writers or works are in the back of your head as you work?

Q: I’m always curious about poets who translate works by other writers. Do those two sides of your literary activity interact at all? How does your work with translation interact with or impact your work as a poet, and vice versa? Or do you see both as part of a larger, singular consideration?

A: Yeah, translation definitely informs my writing directly. I find translation very generative in developing my own ideas and language—trying to render someone else’s language distorts/destroys whatever rote phrasing and imaginary I’ve settled into. I have more success experimenting in that form, too. So often when I’m struggling to write my own stuff I’ll switch my focus to translating works from Spanish. I like working with really dense, ornate poetry, and also writing that has already been translated—Góngora, Garcilaso, Quevedo. It gives a lot of opportunity to subvert and interrogate the language of the original and to play within the tighter forms. When I was initially sketching this book out I wanted it to include a couple translations, one in particular of a poem by the Mexican poet José Gorostiza that Michael Cavuto showed me, but I guess I worked it over so much it got distilled down to nothing.

Q: Perhaps it might be too soon to know, but has the way in which you approach new work different now that you’ve published a chapbook? Is there a difference?

A: I don’t think there’s much of a difference. It made me orient my writing towards a book, rather than individual poems.