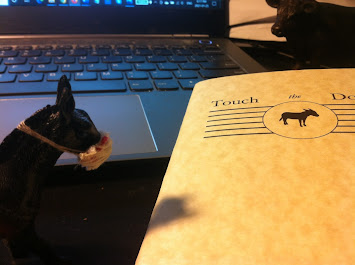 Five poems from her work-in-progress “KASM OF ARACHNY” appear in the twenty-eighth issue of Touch the Donkey.

Q:  Tell me about “Poems from the Tachygraphia.”

A:  The Greeks practiced a kind of shorthand they called tachygraphy. Tachy is speed or swift[ness], graphy = writing. I liked their word and coined “tachygraphia” for poems like these that have been emerging by way of a certain (uncertain!) practice. What I’ve been doing in this mode has nothing to do with ancient Greek shorthand or “speedwriting,” but does result in swiftly written poems that could be considered a kind of “shorthand.” I call those poems (such as the ones here in touch the donkey) “swifts,” and the practice itself “swiftwriting.”

It has roots in a Kabbalistic practice centered on the first letters of words, or what you could call the “initials” of each word in, originally, a source text. Each word is changed, very quickly/spontaneously, as one is listening to the “initials” in the source text. It’s hard to describe without demonstrating or walking you through it by doing it. One of my partners in this practice, Lewis Freedman, calls the procedure “initialing.”

There are a few other swifts, or “poems from the tachygraphia,” in the new book, Mad World, Mad Kings, Mad Composition (Wave Books, 2020), but only a few.

A: It’s very different. That’s why most of it isn't in the new book – it’s too much its own thing.

Q: Given you seem to work in books, over individual poems, might this piece be the openings of a subsequent collection? And with that, how, exactly, do you build your manuscripts? Is the process more intuitive, or have you a more deliberate structure from the offset?

A: Yes, it’s been daunting, but I think I’ve found a way for the swifts to be a book without exhausting the reader, which is the challenge of these poems. Partly, that involved explaining the procedure, or laying bare the device. The manuscript is called KASM OF ARACHNY; the title’s an anagram of Shelley’s radical poem of 100+ years ago, his Mask of Anarchy. I’ve noticed that a sort of repressed political content can seep out in my swiftwriting poems, and my relationship with Shelley goes way back, so the anagram seems in tune. There is also a chapbook-length version of this work called “26 Swifts for the Tachygraphia” (circulating).

How a manuscript comes to be? 100% intuitively. Nothing related to writing or the making of a book is deliberate for me – even the swiftwriting practice is intensely intuitive, even though it’s technically a procedure. I don’t write with a book in mind and I encourage my students not to think in terms of “projects.” Improvisation and intuition are much more likely to allow work that’s alive to emerge. Just happened to come across something Charlie Chaplin said about a performance of his that he thought was no good: “I was stiff. I took all the surprises out of the scene by anticipating the next motion.” That seems to happen a lot in poems and is all the more likely to happen when someone has an idea in mind beforehand—either for the poem or for a whole book.

Q: Do you have any models for the kinds of work you’ve been doing over the past few years? What writers or works sit in your head as you write?

A: As for the swifts, or poems from the tachygraphia, there's a lyric intensity (at least that’s how it feels in the blind process of writing them) and insistent strangeness that for me summon certain extremes of Hopkins and Shakespeare and Césaire and Dada––yep, that natural quartet. Plus Lewis Freedman (see Residual Synonyms for the Name of God, Ugly Duckling Presse), Andy Gricevich, tons of musicians, and other secret Kabbalists. I have a familial/biographical connection to Merce Cunningham’s improvisational way of working and the chance procedures he and John Cage undertook, and I think maybe the swiftwriting brings some of that influence forward a bit.

As for other writing, such some of what’s contained in the new book, some writers hovering over that are Joanne Kyger, Fredericke Mayröcker, Robert Grenier, Bernadette Mayer, Leslie Scalapino, Brenda Hillman, in their various ways practitioners of dailiness to an extent. Others working in that mode now who are important to that book are Richard Meier, Jordan Dunn, Amy Lipman, and Chuck Stebelton. Present-moment awareness is very much at the fore in Mad World, Mad Kings, Mad Composition – in some ways, the book is “anti-poetic.” But that depends on what one thinks poetry is or can be.

Q: With a handful of books and chapbooks produced over the last two decades, how do you feel your work has progressed? Some of your early work, for example, was linked to an influence from the British Romantic poets and the pastoral tradition. Where do you see your work headed?

A: Changes over 7 books and 4 chapbooks have been unpredictable, and surely will continue to be so. If not—that is, if one can see where one’s work is headed, then that could be a signal not to go there. Be careful if you think you know what you’re doing. In fact, maybe turn around and start over.

On the Romantics and the pastoral traditions, btw, I have these thoughts:

Anything one reads and studies with very close attention over a sustained period of time is likely to be influential, but I think that people who connect me with the Romantics are noticing that engagement in the form of critique, revision, interrogation, conversation. (I wrote a doctoral dissertation on Shelley, which required a deep immersion in that period.) Other and equal influences from the beginning have been the Black Mountain School, Language poetry, the San Francisco Renaissance, the New York School and the Beats to an extent. Also, the modern novelists and contemporary experimental fiction and prose writers.

It's good to discovered any work from the past by coming to it backwards, via modern and contemporary poets whose own work is rich with echo, allusion, layers. A complicated engagement with the past paradoxically carries the work forward and ensures that it will continue to change. Martin Corless-Smith, Jenny Mueller, and Cathy Wagner come to mind as peers I see this awareness in very actively, too. The mystery is: You can’t read Stevens without reading Keats; you can’t read Modernism without reading the Romantics, and so on. Of course whenever you’re reading with time-parameters around something, or categories of any kind, you’re leaving a lot of stuff out. With all of the blind spots in mind, the great thing is that modern and contemporary poets can teach you how to read the older bodies of work—as well as how to find what was missing.

The term “pastoral” is almost always misused and/or misunderstood, so forgive me for wanting to contextualize that term first. Even 2500 years ago when Theocritus sang about shepherds at rest in the countryside, he was not sentimentalizing them or being nostalgic. A scholar says: “The predominating tone of Theocritus is one of ironic detachment and allusive cleverness; the country setting figures mainly as an element of coarse realism and occasional barnyard vulgarity, never as an ideal of lost innocence.” I’ve always been much more interested in “coarse realism” and even “barnyard vulgarity” than in idealizing the rural, and nostalgia has no place in poetry. I happen to live on a farm, so when people know that part of my biography, they assume I write about the countryside, which they assume = pastoral. The point is that even what has become associated with the pastoral long after Theocritus’s Idylls and Virgil’s Ecologues can only be (and probably always was) an active questioning, interrogation, revision, contestation with whatever is signified by, or mistaken as, “pastoral.” Shepherds resting in pastures in the 3rd century BCE don’t exist anymore, so pasture-poetry doesn’t exist anymore—but even then, the work was never hearts-and-flowers “nature” poetry.

All of that said, the “coarse realism” of my work is grounded in paying attention, and if what’s around me is a rural place, there will be things in it I’m paying attention to, such as what an apple looks like frozen on a tree from which you can still suck out the juice. If I’m riding the Red Line in Chicago, I pay (or rather, give) attention to that. Ditto wherever. I do live in different places, primarily the farm and Madison, but also downtown Chicago. Prior to the farm, New York City, Utah, Los Angeles. And now Nova Scotia in part. Any environment that has shaped one by being present in one’s thinking and attentiveness may inform (in-form) a poem at any time. Not predictable, not unitary, never a matter of intention.

Q: Do the shifts of geography provide shifts in your work as well? If writing is a matter of paying attention, do landscape or geographical shifts figure as part of those attentions? And if so, how might those shifts present themselves?

A: Yeah, they do. Especially in places where I can be outside and moving physically in some way. But that’s just one circuit of attention, so to speak. That’s the attention one gives (with one’s body) to the physical environment in that time and space, while one is in it.

There is also attention in the form of learning about the geography and environment one is in, both geologically and geopolitically: historically, writ large. Layers of history and layers of geologic change start to be part of what one is perceiving in a place. So then the shifts are multi-layered too, and encompass the indoor work of digging through historical records, reading geologic studies, and so on.

A: Stevens’ Collected, Hopkins, and work by my mentors, Michael Palmer and Robert Creeley – as well as by notional mentors: Kyger, Mayrocker, Niedecker. Novels and prose by Elizabeth Bowen, Lawrence, Woolf, Calvino.