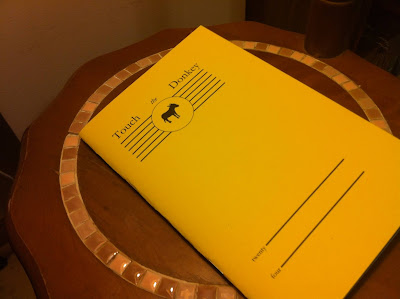 Nicole Raziya Fong is a poet living in Montréal. Past work has appeared in publications including Cordite, The Volta, Social Text, filling Station and Poetry is Dead, as well as in a chapbook produced by the Poetry Will Be Made By All project. Her first book of poetry is PEЯFACT (Talonbooks, 2019).

An excerpt of her work-in-progress “FLESH THEATRES” appear in the twenty-fourth issue of Touch the Donkey.

Q: Tell me about “FLESH THEATRES.”

A: “Flesh Theatres” is a series of interactions and exchanges enacted upon the presence (present moment) of a stage, at once diagrammatic and enigmatic in its architecture. “Flesh Theatres” may be described as a series of actions which come to resemble a previous action, or by an exchange in which one referent transforms into an unrecognizable placeholder, shifting in parallelism with the tectonics of stage, character and direction. “Flesh Theatres” represents a process of understanding/dismantling event/belief, an understanding/dismantling which may entertain a world of concept or form, but never both simultaneously.

A: Right now I’ve been focusing most of my attention on the manuscript of which “Flesh Theatres” is a part. The work I’m doing alongside is similarly engaged with this transmission/delimitation of present/past, memory and belief. I think of everything I’m working on now, the entirety of this project, as a kind of mapping or cartography. The other pieces differ form-wise from the semi-theatrical structure of “Flesh Theatres” (ie. monologues taking the form of unrhymed couplets, dreams dispersed spatially across a page, the use of endnotes to extend/contest a phrase), but their intentions are very much in line with the pieces included here.

Q: How did you come to this approach of, as you call it, “a kind of mapping or cartography,” and how does this structure reveal itself through the text?

A: At the root of the work I’m doing here is traumatic memory, whose fragmentation will at times disclose glimpses of the real, yet more often than not remains obscured in symbol and abstraction. One cannot navigate this realm without some kind of guide or rule system in place.

The theatrical form of these pieces is useful to me in that they loosely provide this kind of rule-based structure, making physical an amorphous influx of impressions, words, images and fragments of speech. What a character comes to embody, how this character becomes capable of articulating event (symbolic or not), then having multiple characters become able to interact, address one another— these exchanges become a kind of directive map onto memory and therefore the text itself.

So it’s upon this plane, this plane of the real, where these connections or this kind of mapping might occur. The catch is, of course, that the reality of this “plane” is a fiction and these interactions are only “real” within the boundaries of their interaction. This boundary is a limit; it is the stage.

If I can refer to the project at large, this mapping is at work on a few different levels – visually within pieces where text-boxes split existing poems, redirecting a multiplicity of implications within the singular, and through repetition, by which certain images, phrases, motives drive themselves forward, hopefully leading to moment of elucidation, the center of the maze, end point of the map etc. It’s a process.

Q: With a published debut and your current work-in-progress, how do you feel your work has developed? Where do you see your work headed?

A: Perhaps you could say that in my first, PERFACT, I was just beginning this process of engaging with language and memory in an exploratory way. The writing I’m doing now is at once a crystallization and expansion of the concerns I had perhaps unconsciously begun broaching in PERFACT but weren’t fully developed there. For whatever reason I feel a lot less constrained by formal expectations now than I did in PERFACT and the ability to see the page as an expansive site of potential rather than a rigid, lineated space by which concept should be conveyed in a particular manner has been exciting for me. I really can’t say where my work is headed as I never know what is coming until it comes. The work changes as I do, in an equally unpredictable way.

Q: Do you see the current manuscript as an extension of the first, or the two manuscripts as a single, continuous project? Or is there even a difference?

A: The two manuscripts are definitely related. The new work, the whole of which I’m calling ORACULE, and PERFACT are not so connected as to form a series, but definitely exist in the same phenomenological world or system. So they share a subjective frame, but do not explicitly speak to one another in the manner one might expect of an extended project.

Q: Have you any models for this kind of project? Are there any authors or works in the back of your head as you work?

A: Chus Pato translated by Erín Moure, Pascal Quignard’s Albucius, Utopia by Bernadette Mayer, Gregoire Pam Dick’s Metaphysical Licks and Alice Notley’s work are all somewhat present in my mind as I work on this project. I’m continually reading Plato; his work at times seeps into my writing in unexpected ways. Most recently, the collection Poesy Matters by Catherine Christer Hennix, specifically her work surrounding Noh theatre. Film, too—the work of Pier Paolo Pasolini, Keisuke Kinoshita’s 1958 film The Ballad of Narayama, Kon Ichikawa’s An Actor’s Revenge and Apichatpong Weerasethakul’s Uncle Boonmee Who Can Recall His Past Lives all illuminate some kind of phenomenological instability, a fluctuation between supposedly disparate realms through visual means.

Q: You may have already answered elements of this, but, finally, who do you read to reenergize your own work? What particular works can’t you help but return to?

A: There are so many I could list: Mark Johnson, Erín Moure, Divya Victor, Kaie Kellough, Nora Collen Fulton, Michael Nardone, Eric Schmaltz. Hannah Weiner, Leslie Scalapino, Will Alexander. I repeatedly turn to Plato, Édouard Glissant, Aimé Césaire, Antonin Artaud, Raymond Roussel, Bertolt Brecht… There are so many others, the vastness of which I’ll limit to these.
Posted by rob mclennan at 10:00 AM