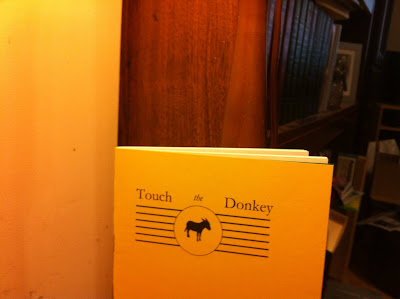 Lydia Unsworth is the author of two collections of poetry: Certain Manoeuvres (Knives Forks & Spoons, 2018) and Nostalgia for Bodies (Winner, 2018 Erbacce Poetry Prize), and two chapbooks: My Body in a Country (Ghost City Press, 2019) and I Have Not Led a Serious Life (above / ground press, 2019). Recent work can be found in Ambit, para.text, Tears in the Fence, Banshee, Litro and others. Manchester / Amsterdam. Twitter @lydiowanie

Her poems “On Not Having Anything to Shatter,” “Plein to see,” “The Absolute Limit,” “Akron” and “Swimming in the Water” appear in the twenty-fourth issue of Touch the Donkey.

Q: Tell me about the poems “On Not Having Anything to Shatter,” “Plein to see,” “The Absolute Limit,” “Akron” and “Swimming in the Water.”

A: At the time of writing those poems, I was very focused on doubt and authority; two forces which often sit on a sort of seesaw from one another, one going up as the other goes down. I like to focus on very specific scenes and images, and associate from there, often with detailed movements of the body (realistic or otherwise) contained within the text. How the body negotiates the environment and the power-struggles of the environment it finds itself in. This then allows me a way to explore the worries of the consciousness proper – somewhat let loose from those events surrounding it – it frees up that voice, those solipsistic concerns, to better understand and, well, have fun with themselves. And to reach outward, bridging the gap. I like to think my poems are playful beasts, rollicking around in their own anxiety – if you’ve got it, flaunt it! so to speak.

A: Well, I’ve been playing with line-breaking more lately and allowing the punctuation to fall away. Primarily I’m a prose poet, and that’s my favourite way to write – there’s a certain madness and intensity and clumsy noisy honesty to it – but I’m also writing some softer, more ephemeral pieces lately, words sort of fluttering about in a papery wind. Even my prose poetry seems lighter as a result. Although that could, of course, just be the weight of dragging something from memory and staring at it too long talking. Perhaps newer pieces always feel lighter by way of being fresh.

Q: What is it that originally brought you to the prose poem, and what do you feel the form allows that might not be possible otherwise?

A: Beckett and visual art. That love of a text that seems to explode out from a pure joy of itself. I never want much to happen in a novel, I just want to be swamped in language. I found that in art often, too, in video projections where one thought collides against another – a barricade. That's what prose poetry allows me; a momentum, rough edges, an immersive pool of experience. And it allows me to hide more than conventional poetry does – the words safe in the close huddle of all the others, shyly sticking their arms up and mumbling Here.

Q: With two full-length poetry books and two chapbooks under your belt so far, how do you feel your work has developed? Where do you see your work headed?

Q: You mention you’ve been deliberately exploring the possibilities of the line-break. What prompted this shift, and what has the shift allowed you to see or do?

A: It happened as a response to a few individual poems, so I decided to pay attention to it. I sometimes wonder if I am bold enough to put one word on one line, for example – so I am perhaps playing with that exposure. It is also interesting to see how the voice changes depending on what shape – and therefore in a sense who – it is trying to be. And then to come back ‘home,’ as it were, to the prose poem and see what has become of me.

Q: You mention Beckett, but what other authors or works have prompted you to do the kinds of writing you’ve been exploring? There are lengthy, and wonderfully divergent, lineages of the prose poem throughout Canada, the United States and England, for example, so I’m curious to know what other threads you might have picked at as potential influence?

A: Well, I’m going to say that most of my early influences were not poetry. I was heavily influenced by Georges Perec’s Species of Spaces and Other Pieces, by the existentialists, by (of course) Kafka, by Milan Kundera, and later (and to a lesser extent) by books such as Dubravka Ugresic’s The Museum of Unconditional Surrender and this wonderful book called Log of the S. S. the Mrs Unguentine by Stanley Crawford. It was the fragmentary I was drawn to, the sentences and moments of experience rather than the whole. I expect I interpreted a lot of things in my own way due to naivety and ignorance, but I think something came out of that too, some way of understanding and writing that came out of my own half-lit path through the maze. I also spent a lot of time with the visual arts, with artists like Christian Boltanski, Sophie Calle, Ilya Kabakov, Louise Bourgeois, Roni Horn; and with films: Sans Soleil, Armacord, Synecdoche New York, ¡Vivan las antípodas!, The Forbidden Room, Distant Voices Still Lives to name a few whose resonance really stays; and lyrics from certain songs ... When you put it all together it becomes a kind of poetry – all that feedback and richness that bounces around and associates in surprising ways. Anyway, finally, I did find out poetry was what I was after, and what I was perhaps already doing; I started reading Tsering Wangmo Dhompa, thanks to a good friend of mine who was more knowledgeable than me in such matters at the time. And now it is also, finally, poetry that influences me. I’ve found some amazing recent collections and made wonderful friends and, with the internet and online literary journals, there is inspiration and influence (and community) everywhere. It is rather impossible (but enjoyably so) to keep up.

A: I’m currently going back to Vahni Capildeo and Karen McCarthy Woolf a lot. There’s this collection Nowhere Nearer by Alice Miller that is quiet and lonely and beautiful – like a drifting iceberg in the middle of an abandoned airfield in Berlin. And I’ve been enjoying Crispin Best’s work online for a number of years, and am pleased to hear he finally has a full collection (Hello) coming out in November with Partus Press. His stuff is playful and light and frivolous with just the most amazing profound surprises thrown in – like being punched in the gut by a lollypop. What else? Certain go-to online journals such as Train, Stride, Litter, Blackbox Manifold, Datableed. And prose poetry anthologies like the recent Valley Press Anthology of Prose Poetry and The Penguin Book of the Prose Poem – those two should keep me happy for a while.

And thank you for these questions. I always find it a useful and engaging way to think about my own processes and practice as well.
Posted by rob mclennan at 10:00 AM