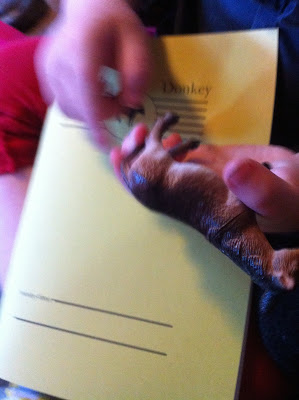 Shelly Harder is from rural Ontario and has been living and studying in Ireland and the UK, where their work has appeared in pamphlet, podcast, and live performance. A first chapbook, remnants, was published by Baseline Press.

Their poems “from inspirobot,” “bedtime with Proust, while Jimi plays the blues” and “from 96 Quite Bitter Beings” appear in the twenty-third issue of Touch the Donkey.

Q: Tell me about the poems “from inspirobot,” “bedtime with Proust, while Jimi plays the blues” and “from 96 Quite Bitter Beings.”

A: The inspirobot pieces came about when I had a wisdom tooth removed. Slightly high on a sedative and bored out of my mind, I remembered an article I’d seen about an AI that had generated some twisted inspirational posters. I typed in inspirobot.me and began to click. A lot of banal and nonsensical stuff came up, but with occasional odd gems (not so different from how I find the process of composition when I’m the one generating the text). At some point I realized that the occasionally interesting sayings of the inspirobot could be arranged into pieces. I’d just finished a big project that had left me dried up and in need of a rest, but I didn’t want to give up writing altogether. Hitting “Generate” and saving the bits I found striking or funny was doable. And the process of composition was fun too. In collaboration with the inspirobot I could voice a grim sense of humour.

Working on these pieces provided something of a turning point. The process of composition involved wedging together disparate bits generated at random and creating meaning through the resonances these fragments developed in relation to each other. At some point it clicked that the process of generating text and the process of composing a piece can be two quite disconnected things, that the context in which a bit of text comes to exist doesn’t need to guide the meaning or use that text can be put to. I started culling through mounds of rough writing I’ve produced over the past few years, pulling out the interesting bits, and using those as the raw material out of which I began to compose some pieces. One day I saw a song title on an album that had popped up in the list of suggestions some algorithm had kindly produced, “96 Quite Bitter Beings.” It’s a work that’s still in process. The difficult thing about trying to find out how random fragments should fit together is that so many combinations could work.

“bedtime with Proust” happened in quite a different manner. I’ve slowly been making my way through Proust’s behemoth the past few months, and one evening I was listening to an album of Hendrix playing blues songs. The piece came out all at once. I think I had the sense that both these works of art are interested in the vulnerability and exposure that’s involved in feeling things. I’d recently eaten stewed apple. I don’t currently have a cat. “Take me from this lonesome place” is a line from a Hendrix song.

A: For a while I’ve been working on zero dawn, a long narrative poem whose speaker recounts her experiences sleeping rough. This piece exists in multiple versions of different length. It’s composed of mobile parts that don’t have to be in any particular order for the story to work, and so I have combined and recombined various versions for particular contexts.

This sense of malleability, of there being nothing inevitable about structure, is the operating principle of a lot of the stuff I’ve been working on recently. zero dawn is a bit different because of the dramatic context of the speaker. Voice usually is something I interact with more abstractly, approaching the composition process more like splashing textures and sounds and ideas until a vibrant sensory and emotional experience has coalesced.

Bits of 96 Quite Bitter Beings are regurgitated fragments of personal experience, but recontextualised by an attempt to come to grips with events in the world more broadly. In contrast to this restless expansiveness, which feels to me to land somewhere between essay and poem, I’ve been working on some shorter lyric pieces concentrated on exploring specific emotional dynamics, often relying heavily on sound and musicality for their effect. I’ve also been doing some play with writing driven primarily by internal sound impulsions that hold together loose strings of reference. A couple pieces in my chapbook, remnants, work this way.

Q: Are these pieces fragments from multiple projects, elements of a singular manuscript or even threads that haven’t yet found any larger structure or tapestry?

A: I’m not sure at the moment about the larger picture. Currently, these pieces are fragments of several unfinished projects, a couple of which may or may not eventually coalesce into a coherent structure. And if that happens, perhaps I’ll have a manuscript.

Q: Has there been a difference in the way you think about putting together a manuscript since the publication of remnants? How did that manuscript first come together?

A: remnants is the first manuscript I’ve completed. One of the main things its process of publication has taught me is that it’s okay for it to take a while for a loose assemblage of pieces to become a well-structured text.

remnants began with travelling in 2015. I was alone and wrote a lot. The writing was a mix of poetry and prose, lucid description and surreal dreamscape. I threw some of it up on my blog. Later in the year I developed and edited those pieces and compiled them into a much larger manuscript than the one that got published. Karen Schindler at Baseline Press read through the sprawling manuscript I’d put together and indicated which pieces she thought were strongest. This feedback was crucial in shaping the manuscript’s development. I more or less followed her guidance on which pieces to include and then was left with the task of structuring them into a coherent text, work I did in short bursts across several months. The intervals in which I didn’t think about or look at the manuscript provided clarity.

So I now think of my process of putting together a manuscript as likely to be a lengthy endeavour, to some degree collaborative, and benefitting from periods of not being given any direct attention. But I’m open for further experience to revise that notion.

I must say, I like the compactness of the chapbook form. It’s taught me the virtues of brevity. remnants is so much better because of the severe selectivity the text underwent.

Q: What might this mean in terms of what you are working towards now? Are you thinking again in terms of something chapbook-sized, or potentially full-length? Or are you simply writing and not worrying about any of that yet?

A: For a while now I’ve been writing without much of a clue what I’ll do with it. Which feels fine at present. I’m allowing myself space to explore freely where language might take me without feeling constrained by the pressure to make something substantial of it. That said, I do have a couple chapbook ideas in the back of my mind and I’ve made some halting beginnings on that front. The concise scope of the chapbook form is attractive to me. I suspect it will be a while before I’m at the point of thinking about a full-length collection.

Q: How does performance help shape ways in which you write? How do you balance the potential performance aspect of a piece against how it ends up on the page?

A: Because I’m always thinking in terms of sound, I tend not to view performance potential as extraneous, but rather as an integral aspect of the composition process. When wrestling with a line or the structure of a piece, I read it aloud to get a feel for whether it’s working. If that doesn’t give me enough information, I’ll record myself and listen back. It’s an instinctual process, but that’s how I make judgment calls. The words have got to feel good on my tongue and in my ear.

Although I’m interested in the musicality of words as abstract units of sound, I’m also feeling and listening for conceptual elements - for how ideas, images, and emotions play off each other, forming their own tonalities, rhythms, textures, dissonance. And I can only feel how this is working when the words are incarnate on my tongue, in my ears.

So that’s my process, which is all about private performance. How a piece actually works for an audience is a different question. Some kinds of density can only be absorbed when left to sit with. That’s the great thing about the page. But to me the page often feels flat, insufficient, as though a poem is a score waiting to be animated into sound. That said, I greatly enjoy writing that blurs the line with visual art.

My goal is writing that can be enjoyed as a once-off in a performance context while also providing the richness and complexity that makes the page a place to return to. That sense of rhythm and texture (on both the purely sonic and the emotive/conceptual levels) that I’m feeling for during composition is something I hope comes through within performance. So that even if some of the content might be lost when taken off the page, listeners will find themselves absorbed within an aesthetic and emotive space.

A: These days I follow quite a bit of journalism to maintain at least some semblance of awareness of what’s happening beyond my life’s little sphere. Otherwise, I’ve been reading mostly novels the last while, devouring works by Calvino, Dostoevsky, Kafka, and, most recently, Proust. I’m repeatedly drawn to the work of Woolf, George Eliot, and Jeanette Winterson. For short stories, it’s often Borges or Barthelme, though for something completely different, I’ve recently discovered Mary Gaitskill. Philosophy too is an energizing force, whether I’m taking up contest with a mammoth text such as Sartre’s Being and Nothingness, finding grim solace in E.M. Cioran’s pessimistic aphorisms, or diving into Cixous’ gorgeous prose. I also often turn for inspiration and delight to the long tradition of English poetry – the alliterative long lines of the Gawain poet, the gnarled soundscapes of Hopkins, the density and wit of Donne, the exquisite lyricism of Keats or P.B. Shelley. Looking to the present, this past year I discovered Terrance Hayes and Amanda Jernigan, whose work, quite frankly, blew me away. Anne Carson is another favourite contemporary writer, as is Maggie Nelson, both of whom open up potent textual spaces. As for specific works I can’t stop myself from returning to (even if I wish I could) – a few: Joyce’s Ulysses, Blake’s “Marriage of Heaven and Hell,” Milton’s Paradise Lost, Beckett’s Not I (as voiced by Billie Whitelaw).