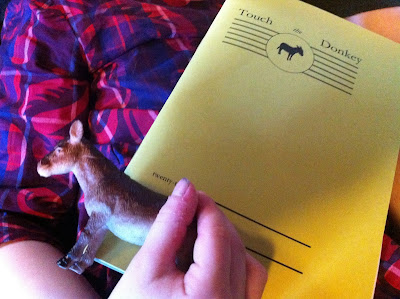 Dale Tracy is the author of the chapbook Celebration Machine (Proper Tales, 2018) and the monograph With the Witnesses: Poetry, Compassion, and Claimed Experience (McGill-Queen’s, 2017). A further chapbook is forthcoming from above/ground press. She lives in Kingston, ON, where she teaches at the Royal Military College of Canada.

Her poems “Gatekeeper,” “This would be the place for you,” “Professionalism” and “Derelict Bicycles” appear in the twenty-third issue of Touch the Donkey.

Q: Tell me about the poems “Gatekeeper,” “This would be the place for you,” “Professionalism” and “Derelict Bicycles.”

A: These poems are all about power.

“Gatekeeper”
I have a few poems like this one that I would describe as fables (though maybe with ambiguous lessons—the poem suggests the boundaries of the keeper’s options, not some best thing she might do). A situation, mostly its mood, occurs to me, and I follow it into a poem. I’m tempted to think about these poems as speculative or weird fiction, except that they’re not fiction. For me, poetry is a way of theorizing, not telling stories.

“This would be the place for you”
I spend a lot of time applying for jobs because universities now hire mainly on temporary contracts rather than for permanent positions (https://www.caut.ca/bulletin/2018/09/shattering-myths-about-contract-academic-staff). The mechanisms of contract work involve diverse reminders that there is no place for me, entirely regardless of my commitment to my students and studies. I think this poem is a little bit funny, but it’s a dark humour, since it turns opportunities into hunted prey with which the speaker is precluded from forming relationships.

“Professionalism”
I like learning so much, I became a professional at it. By gaining a doctorate, I formalized that aspect of my identity into a title. Formalities highlight ways the world is locked into place. In the foreground, convention is so interesting; in the background, as the accepted structure of life, it makes me want to make things weird. Convention has meaning because we give it, but convention in the background functions as though it has its own inherent meaning, one which often supports the devastatingly and unequally harmful.

To be clear, this poem is nervous about assumptions and habits that attend expertise and authority, not my profession (the opportunity to think with others and to galvanize thinking is what I want my life to be for) or conventions of authority themselves (these are essential for establishing agreement about the reality we live).

“Derelict Bicycles”
This evocative phrase came to me through an email giving warning about the date of removal. I thought, what other remnants might be lashed to borders?

A: They all have wonder in them. Wonder is the common element in most of my work.

Q: What do you mean by that?

A: Because writing poetry is for me a kind of theoretical or philosophical endeavour, each poem is prompted by curiosity. A poem helps me figure something out (or at least think about it), so it responds to wonder (as in wondering and as in marvelling) and tries to capture that wonder.

Q: Given your poetry is fed, in part, by theory, how easy is it for you to shift between poetry and theory, or do you see them as intricately connected?

A: Poetry is a way for me to sort out how to live or what I am living; at the same time, a poem often theorizes itself, sorting out in an observable way what a poem can do or is doing. In these ways, I think of poetry as being theory.

I’m also influenced by particular literary theories and tools in a way that I’m not always actively thinking about. For example, my scholarly interest in metonymy leads my poetry toward forms of contiguity (associations based in proximity) rather than substitution (as in metaphor).

Q: What poets have helped you get to this point in your work?

A: In the most direct sense, I wouldn’t be at this point in my work without the poets who gave me opportunities or promotion or prompting: Stuart Ross, Michael e. Casteels, Patricia Robertson, Jason Heroux, Allison Chisholm, my secretive writing group, Bruce Kauffman, attendees of Bruce Kauffman’s monthly open mic nights, and you, right now with this interview. (I want somehow to make this acknowledgment without also making a public claim on these people—but I guess we all know that a small act on one end can be a big one on the other.)

Less directly, I need different poets at different times. I’m just going to list all the poets whose work I feel right now has stayed with me. If you ask me again some other time, it might be a different list (well, it definitely will be—I’ll have read more!).

Q: How do you feel your work has developed up to this point? Where do you see your work headed?

A: My earliest poems speak more privately—in a more private language. I’m not talking to myself anymore because I can imagine readers now. Reading poetry as a poet (consciously as a poet) has made a big difference.

My poems are headed into more aesthetic joy which I think will enhance whatever political/moral force they might have. More recently, I’ve felt sometimes dragged toward a despairing cynicism that hasn’t been all that helpful for writing or living in the world as it is. I could be more helpful and better at what I do if I can make this emotional/stylistic return to myself.

Q: You might have answered a part of this already, but who do you read to reenergize your own work? What particular works can’t you help but return to?

A: Returning to reenergize had not occurred to me. My returns to poems have usually been to figure something out and to do that figuring in the form of a scholarly essay. Now that your question has prompted me to think about reenergizing, I can see that when I return to other texts—a song, a movie, a clip from a sitcom—it’s a particular mood I’m looking for, one that lets my mind slow down and settle in.