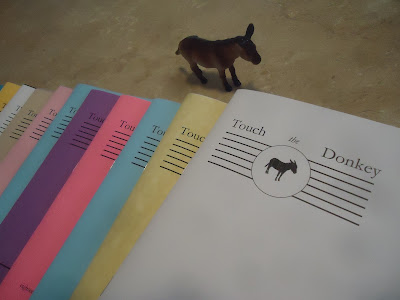 Born in Halifax, Trish Salah is the author of the Lambda award winning, Wanting in Arabic, and of Lyric Sexology Vol. 1, and co-editor of a special issue of TSQ: Transgender Studies Quarterly on Trans* Cultural Production. In 2018 she was a finalist for the Dayne Ogilvie prize. She has a story in the science fiction and fantasy anthology, Meanwhile, Elsewhere and poetry in recent issues of Anomaly, Cordite Poetry Review, Prism International and Supplement. She is associate professor of Gender Studies at Queen’s University.

Her poem “Sliding past” appears in the twenty-first issue of Touch the Donkey.

Q: Tell me about the poem “Sliding past.”

A: “Sliding past” comes out of a feeling of being haunted. They say the unconscious knows neither time nor contradiction, and the poem’s mood is made of several different moments impinging upon one another, or emerging through one another. I think that is what the poem is interested in, the ways in which different temporalities manifest in/as any given present. So there is desire, palimpsest, conflict and contradiction—no contradiction, a bit of all that. It is not a new problem, wondering about how representations of time manifest for consciousness, how much an individual subject can hold, what drops away, what gets written over, etc.

A: I have two different manuscripts that I’m working on. The manuscript this will be a part of, and Lyric Sexology Vol 2. For LS Vol 2 I’m reworking the ways in which changing sex, or gender, moving or being in between, have been represented. Lyric Sexology Vol 1 was poetic investigation of archives of sexual minority representation, particularly of the more wildly exotic and often toxic figures and rhetorics of those archives. LS Vol 2 is mainly what I’ve been working of for the two years or so, and it has continued that work focusing upon fantasies of place based (and so cultured, racialized) same sex desires and sex/gender crossing identities, i.e. “exotic” other sexes and sexualities, beyond.... So “Sliding Past” isn’t that. The question about time and memory in “Sliding Past” is also about desire and its capacities, and I seem to be working on a sequence or series thinking about that.

Q: So is Vol 2 a completion of the Lyric Sexology project, or another volume in something more ongoing?

A: Vol 2 is the second part of the Lyric Sexology project, and likely the completion of it, for now at least.

Q: What is it about that? project that prompted a second part? Did you always see it as a multiple-book project? When I became aware of the first volume, for example, I didn’t know if this suggested the first of multiple, or if you were being playful.

A: The archives Lyric Sexology plays in produced figures of sexual otherness that are vast and varied. So it is not about completion. However, within those archives, there are different problematics that stand out.  In particular the second book revisits writing that imagined sexuality and gendered behaviour to be strongly place based, driven by geography and climate. So there is a particular way of writing, about sex and race, that had its roots in imperial travel, the movements of amateur folklorists and sexologists, colonial adjuncts and tourists...and I wanted to give a book to thinking about that.

Q: I’m curious as to why you decided to work this kind of archival study through poetry, over, say, a more traditional essay format or any other kind of critical prose. Was it a conscious choice, or did the form of the project evolve more naturally? And what do you think working such a project via the poem allows that might not be possible otherwise?

A: Before I decided to rewrite these archives with poetry I was working on a dissertation and I sometimes describe Lyric Sexology Vol 1 as the b-side of that work. That said, some poems interested in this kind of inquiry did show up in my first book, Wanting in Arabic, which was finished before I wrote the dissertation. The second volume of Lyric Sexology takes inspiration from Western sexologies of the so-called “Orient” and in that way it has roots in both of my first two poetry collections.

Q: Given this current project is concurrent to Lyric Sexology Vol 2, how do the two manuscripts relate to each other, and how are you able to keep them separate? Does the current manuscript have the sense of being post-Lyric Sexology, once that other project is complete?

A: Great question. This poem, “Sliding Past” belongs to a project that has been evolving along side the Lyric Sexology books. For a while I was calling it Solidarities, and thinking it would mainly be poems of, well, solidarity, that performed the action of being in solidarity, and poems that were about how one makes political commitments. Now I’m thinking Solidarities, maybe? because the more I work these poems about solidarity, the more I see that they are also about complicity and desire and phantasy and other questionable, less certain things.

In terms of keeping the manuscripts separate, it is not an issue most of the time. I do know what I’m writing and can see if it is in dialogue with other pieces that also clearly belong in the same book. And the Lyric Sexology Vol 2 poems are mostly written out of/about four different sites, Toronto, Dawson, Beirut and the moon. However there are occasional exceptions, poems which could equally belong in either book. Then it is a more difficult call.

Q: How did you first began working on book-length poetry projects, over, say, crafting individual, stand-alone project? How did you get from starting to think about writing to working on the book as your unit of composition?

A: I don’t know that I work with the book as a unit. I mean, for a long time, you’re just writing poems, and seeing what they say to one another happens after. But I will say that at a certain point in my writing poems with 19th and early 20th sexological source material, I knew they not only belonged to one another, but also needed other poems to be written, poems that engaged with ethnography, autobiography and later discourses on transgender. Some of which I was writing anyway and already. So I saw in the relationship between these poems, written and unwritten, the outline of a possible book. Then I was invited to submit my manuscript to Roof, and it needed to be finished, to have some coherence...I wrote a lot that year, got rid of a lot too, but in the end I knew that the book would necessarily be incomplete, would need to be continued. And so Vol 1 and Vol 2.

Regarding, Solidarities, maybe I would say that the taking shape of the manuscript is a little different. I’ve been writing all this work, for years, that is NOT Lyric Sexology, and that begs the question, what is it? Does it have its own coherence, its own set of interrelations? And I’ll be honest, I’ve wondered whether these poems that I’m gathering under that title, whether they are one or two things themselves, or possibly more. For now, though, I’m leaning towards their interconnectedness.