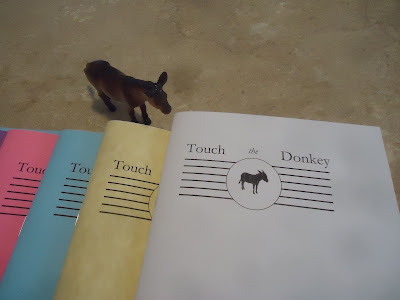 Hailey Higdon is the author of the poetry collection, Hard Some, available from Spuyten Duyvil Press. Her recent chapbooks include A Wild Permanence (Dancing Girl, 2018) and Rural (Drop Leaf, 2017). She currently lives in Seattle. Find her online at haileyhaileyhailey.com.

Her poems “Upstream,” “Wake Up We Send Trouble to Each Other” and “I’ve Been Told There’s a Roller Coaster” appear in the twenty-first issue of Touch the Donkey.

Q: Tell me about the poems “Upstream,” “Wake Up We Send Trouble to Each Other” and “I’ve Been Told There’s a Roller Coaster.”

A: Both “Upstream” and “I’ve Been Told There’s a Roller Coaster” were exercises in automatic writing. “Upstream” was the offshoot of a journal entry written on a trip to Hawaii. It sort of pairs with another poem I wrote at the same time while sitting at a café in Pāhoa a few months before the volcano erupted. I watched a man take up an entire table, not order anything and loudly talk to the busy waitress about another waitress who was wasn’t working that day.

“I’ve Been Told There’s a Roller Coaster” was written before bed one night. It’s basically my way of processing samsara. There is this dog that yaps all night in our neighbors yard. I started thinking about how long life is, how much we repeat the same things that make us unsatisfied, and how it erodes the parts of us that are abundant and confident and hopeful and good. I think this is related to consumerism—compulsive consumerism that pushes people away from dreaming big or feeling big outside of the goal of stuff. I know I carry this narrow fatalism around. I count on the people I love to remind me it is there and to remind me of the glimmering margins outside of that space.

“Wake Up We Send Trouble To Each Other” is a poem I have difficulty describing in language outside of itself. I can tell you what I am thinking about now, if that helps. I’m considering the narrowness that grips and bottlenecks our relationship to our interior life, our loves and our community. Someone flushes up next to us and tries to make a connection, and how many times do we miss it? We are so uncomfortable as integrated beings, and it’s not exactly our fault. It’s terribly hard to see both the hard parts about the world (and ourselves) and also see the good parts and the so-so parts. More often than not everyone agrees to be looking at the deficit instead of the dream life. I mean that in several ways—the emotional deficit we carry, the community deficits brought on by systems—systemic racism, our broken healthcare system, legal system, work—we end up paralyzed and staring at these gaps (the trouble) instead of dreaming beyond them. And it’s self-perpetuating because that dream doesn’t even appear to exist when we are inside those broken systems—we don’t even believe we can develop the capacity to visualize it. We think the capacity to dream becomes available only when the gaps are closed. Like an agreement to dream about things later, once the system is fixed, but we can’t fix the system without the dream. And all this—this way of being in the word—it has an impact on our bodies that we carry with us and internalize in a larger multi-generational way.

A: Most of my newer work is the product of a very slow, seeped-in process. These poems are much more immediate.

Q: What prompted you to explore automatic writing? In your view, do the resulting poems differ from the poems composed through your “very slow, seeped-in” processes? Is there a difference?

A: Yes, they are quite different. My “very slow, seeped-in” process has led me to write longer, more personal poems. I think this difference can be felt also, when reading these pieces compared to reading some of my other work (e.g., Hard Some or Rural). Honestly, I use automatic writing to remind myself that a poem is usually always there, so long as I take the time to sit down and find it.

Q: With a half dozen or so chapbooks over the past decade, alongside a full-length collection, how do you feel your work has developed? Where do you see your work headed?

A: I have always struggled with the problem of having too many ideas and not enough persistence. This may be why I have a lot of chapbook length things, but just one book. And why the one book is made up of lots of tiny books. As I get older, I am learning how this operates in me. How I can spin my frenetic energy inward toward one large hovering thing, instead of a million little things. Hard Some was one of those large “things.” Lately, I have been working on a series of essays—my next big hovering thing. They work for me because I can have a sort of loose thread between them, and still feel able to explore separate ideas. They hover around pregnancy, motherhood and the fertility process that accompanies assisted reproduction for queer folx. Oh yeah, and they are also all about trees.

A: One thing led to another. I wrote the section “Yes & What Happens” first. After that, I couldn’t let go of the form. So I wrote another long poem in the same form (“A Wild Permanence”), then came “Breaker,” then “Children.” Though they were separate chapbook length poems, they were always a part of the same continuous thought process and they remained connected loosely in form—all written in small prose blocks.

The work followed me through a couple of years in my life where I was going through dramatic personal changes. When “Children” was done, I no longer felt tied to that form, so the book felt done too. The most important thing I learned was to wait. It took me much longer than I expected to find the right words for each poem. There was no rushing. Every bit of the book was considered slowly.

Q: What writers or works have influenced the way you write? How did you get to a point where you are writing in sequence, aka chapbook-length units?

A: Here’s what I know: I was and am heavily influenced by my partner, the writer Tanya Holtland. Mostly, it’s the way we manage to build writing into our lives that determines the forms that are available. She also writes very slowly and carefully, and after we met I started to see that way of writing as more valuable than I had in the past.

While writing Hard Some I was reading Will Alexander’s Compression and Purity. I can see his imprint strongly there. I love getting lost in his cosmos. I was also reading Cesaire’s Discourse on Colonialism, Ngugi’s Globalectics, Twyla Tharp’s The Creative Habit, and Eckhart Tolle. I was spending a lot of time with my friend, the former-Seattle poet Maged Zaher, and I know his language trickled into the book. Other influences that come to mind in my writing life—Juliana Spahr, Maggie Nelson, Frank O’Hara, Joanne Kyger, and Hannah Weiner.

Mostly the chapbook length forms come from my inner sense of time, and how much material I decide one poem can hold within a certain time frame. I’m not sure there was a journey to get to that place. It’s just what happened.

Q: Finally, and perhaps you’ve already answered this, but who do you read to reenergize your own work? What particular works can’t you help but return to?

A: This list hasn’t changed much over the years—Lorenzo Thomas’ Dracula, Joanne Kyger’s Collected Poems, Aime Cesaire’s Collected Poems, John Cage’s Silence, Juliana Spahr’s The Transformation and This Connection of Everyone with Lungs, anything by Vonnegut. And my friends. I read my friends when I’m stuck.