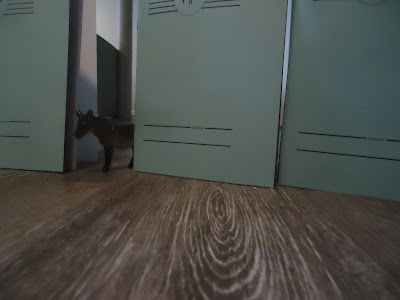 Claire Lacey is a Canadian writer currently living and working in Hull, England. She holds an MA in Creative Writing from the University of Calgary. Her first book, Twin Tongues, won the 2013 Robert Kroetsch Award for Innovative Poetry. Her work has appeared in publications including The Windsor Review’s Best 35 Under 35 issue, Dandelion Magazine, Filling Station, Dusie, Poetry is Dead, and Dreamland. Claire is currently working on her second book, which is about her recovery from a brain injury and subsequent (or is that consequent?) move across the Atlantic.

Her poem “Hull 2017” appears in the sixteenth issue of Touch the Donkey.

A: Hull 2017 is a lament and a blossoming. It’s an ecopoem imagining the archeology of the future – as the oceans rise, rivers flood, coastal cities disappear. Will future archeologists shift the water the way we shift sand? What would they find on the riverbed of the Humber? The Hull? I watch at low tide and see the rubbish that lines the mud. There is litter everywhere here, a careless disposal of plastics, metals, glass. I worry for our world, I howl for our ecosystem, but at the same time there is beauty & even wonder in urban detritus.

In 2017 Hull was the UK City of Culture. It was a huge boom for the city, bringing funding, arts, tourists, and pride to the city. Some of the artwork has been staggering, amazing, provocative. Some has been mundane. Some has been thoughtless. I question, for instance, a newly refurbished town square filled with Lego daffodils for one week. Many of the shops surrounding the square sit empty, and have been decorated to make them appear less vacant. The flower installation brought colour and joy to passersby, and then the daffodils were auctioned off for people with enough money to take home and keep as a souvenir. Remember that time the city was beautiful? Remember when we made a temporary effort? Is there anything so capitalistic as a branded plastic flower? The square is now beige and wants for a garden, a bit of real greenery for not only people, but also insects and birds to enjoy... Hull has a few public green spaces, but could certainly use more. I was tempted to plant a flower bed myself. Maybe a shrubbery or two. Imagine an apple tree bearing fruit in the city centre!

But because of ever present CCTV, and the precariousness of committing a crime (is planting a garden really “antisocial behavior”?) on a temporary work visa, I am hesitant to engage in renegade gardening in England’s urban spaces. So this poem is my renegade garden, planted safely away from city council’s planning permissions process.

Q: How does this piece fit into the other work you’ve been doing lately?

A: I have been writing and rewriting the same poem since September 2014. Eventually, maybe, it will express what I need it to, or maybe form a manuscript that will. I have been writing around the dislocation of identity that accompanies a traumatic brain injury and chronic pain, the attempt to claim a “recovery process,” the desire to return to a former, more potent self. This text is situated in my own experience with a life-altering concussion sustained while playing roller derby.

More and more I am seeing an ecopoetics of riverbeds and injured bodies as a parallel text. Rivers collect detritus, but can appear clean from the surface. My injury manifested much the same way: cognitive impairment not immediately visible to the outside observer. Like the brain, a river can heal itself, but it needs the time and the resources to do so. Like the spine, a river communicates to the body of land around it, and when the signal is cut off, there is atrophy. But there is the potential for repair or rerouting, in some cases. The (my?) body is situated in and projected upon the surrounding landscape, both in sympathy and in defiance.

Q: Have you any models for this kind of work? And how did the injury change the way you approached writing? Did the shape of your writing alter as well?

A: I have many models, actually. Margaret Christakos comes immediately to mind, particularly her explorations of her mother’s post-stroke language in Multitudes. The unraveling of coherence, combined with an unrepentant personal lyricism, has been like scaffolding for my own thought process. Recently I encountered the work of playwright Shannon Yee, whose immersive multimedia production Reassembled: Slightly Askew deals with the subject matter of her own recovery from a brain injury caused by a sinus infection. It fascinated me largely because it is so very like audio work I created immediately after my head injury: raw, emotional diary recordings that I layered to echo the maddening noise and nonsense in my mind. Yee places the audience in a hospital setting – you lie down, blindfolded, to listen to a play recorded in binaural audio. It’s a dislocating experience, one that actual triggered physical symptoms in my body – headache, dizziness, pain – as my body related back to its own memory.

The way I approach writing has changed: it is more internal and troubling. While Twin Tongues was very political, it was also largely a work of fiction. Now my poetry is more autobiographical, and that is much more difficult for me, in an the-author-is-dead kind of anxious way. Which is ridiculous, as much of what I enjoy reading is deeply personal, narrative, dare I say confessional poetry. I am getting comfortable being less sly, less oblique, although I think even at my most melancholy & totes serial self on display the poetry remains a bit tongue-in-cheek. At readings the reaction has been staggering – very positive, and I've had others tell me how much they relate their own experience of stroke or concussion or mental illness to what I have written.

My writing is also less concerned at present with visual presentation, and is perhaps more performative in nature. I am very interested in sound & recording at present, and less with the book as an object. That said, I’ve just started some cut-up & collage work, so I might have to take back this statement by the time I have completed the manuscript. But hopefully my approach has grown & matured, and will be different than what I have produced before. If I repeat the same experiments enough times, eventually I’ll achieve a result, yes?!

Q: How does your more recent confessional strain interact with these collage experiments? Do they interact at all, or are they completely separate?

A: They are completely interactive, as I am currently chopping up old horror novels (in particular Frankenstein and Dr Jekyll and Mr Hyde and layering them with both diary entries and medical texts related to concussion. I have also been working on a collage self-portraiture, trying to recreate the image of myself that I experienced through my concussion: a distorted, lopsided, Francis Baconesque self. These are not the eyes I remember having, but here they are in image after image...

Q: What do you feel the inclusion of text from old horror novels allows in your work that you wouldn’t be able to articulate otherwise? What is it about the language of classic horror, over more contemporary options, that appeals?

A: Horror, particularly classic horror, provides a familiar language to share an unfamiliar experience. The pervasiveness of the genre, with a handful of stories repeated across different mediums (books, movies, children’s cartoons, podcasts, etc), acts as a landmark from which to relate the less universal experience of traumatic brain injury. Horror also constantly examines identity and the body, the relationship between ethics and medicine/science, and probes into the nature of fear – it becomes a useful shorthand for these discombobulating questions.

Q: Do you see this poem as book-length? How does this process compare to putting together your first collection, Twin Tongues?

A:  I do see it as a book-length poem at the moment, though I reserve the right to change my mind on that front. Twin Tongues, which is some ways is also a book length poem with several interlocking sections, was written while I was in my Masters’ program. The book itself encapsulates my own processing of the theories I was studying – linguistic theory, post-structural theory, translation theory, post-colonial theory, pedagogical theory...and so the text is part research project, part ethical struggle. I was lucky enough to have a lot of input from peers and professors (a billion thank yous still owed). On the other hand, the current project starts with the interior and works outwards, trying to understand a massive life-changing event by reaching out – sometimes into pop culture, sometimes into theory. And it has been largely a solo project, as I have in many ways isolated myself from my communities – not on purpose, but leaving the academy, moving across the ocean, experiencing a massive injury all make it hard to stay in touch & discuss the projects & processes of writing. This actually makes publication much more intimidating, a more vulnerable experience because I am trusting my own judgement about what is ready enough, what is interesting enough for exposure.

A: This is a difficult question considering I gave up my poetry collection when I moved across the Atlantic, and more and more I find myself missing those books. But I find myself returning again and again to Margaret Christakos, Erín Moure, and NourbeSe Philip, and every time I carry away a new thought process, a new take on writing, reading, and the world. Recently I got into a beautiful little book by angela rawlings called Si Tu, which reflected a lot of my own thinking about embodiment and gave me a little feeling of affirmation. I’m also reading Suzette Mayr’s new novel, and her work always makes me want to get writing, get writing, and maybe someday write with such poignant and sarcastic insights into the people and places who make up this weird little world of ours.