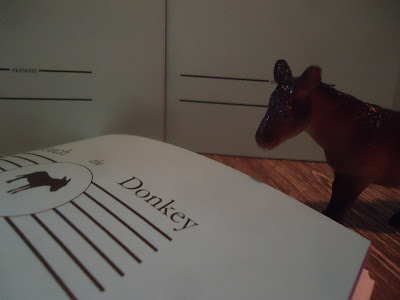 Catriona Strang’s latest book is Reveries of a Solitary Biker (Talon 2017); she recently edited The Gorge: Selected Writings of Nancy Shaw (Talon, 2017). She frequently collaborates with musicians and other writers. She is the former editor of The Capilano Review and Mum to two kids. She lives in Vancouver on unceded Coast Salish territory.

Her poem “On Not Looking Into Chapman’s Homer, gleanings for Louis Cabri” appears in the sixteenth issue of Touch the Donkey.

Q: Tell me about “On Not Looking Into Chapman’s Homer, gleanings for Louis Cabri.”

A: I was visiting my friends Louis Cabri and Nicole Marcotić last summer here in Vancouver, saw a copy of Chapman’s Homer lying around, and made a weak joke about how I should write “On Not Looking Into Chapman’s Homer”. And then I did. At the time I was reading quite a lot about caring labour and its continued invisibility, and about value and value-formation, which I used in the piece.

I also bike around Vancouver a lot, and often check our network of book exchanges while doing so. I love book exchanges, and got a city grant to put one up on our street, which our neighbour, the sculptor Juga Kitanovic, built. I think it’s the most wonderful book exchange in town. I can send you a picture if you like. Anyway, I’ve found some great stuff in book exchanges over the years, including books on women’s labour in the 19th century and lots of weird old recipe pamphlets with wonderful mid-century graphics. I've been wanting to do something with them for ages. “On Not Looking” is what happened when I combined those book exchange finds with my reading on caring labour and value.

A: It’s a continuation of the work I’ve been doing lately; in fact, it’s the epilogue to a larger work entitled Reveries of a Solitary Biker, a response to Jean-Jacques Rousseau’s Reveries of the Solitary Walker in the form of a deck of cards set to music, which was published by Talon last fall.  I think “Chapman’s Homer” is less sparse and more direct than the rest of my Reveries poems, though, but like them it is also directly related to my experiences as a care provider, whose work is for the most part invisible and undervalued, even by me.

Q: I’m curious in your work composed as responses to other work. Corked (Talonbooks, 2014), for example, was composed as “poetic responses to Proust.” What is it about the “response” that appeals, and why the response to specific literary works? What is it that drives you to respond to such works, in such ways?

A: Isn’t thought embedded in language? Isn’t reading thinking? And aren’t we always in some kind of conversation with our colleagues, our friends, the writers we’re reading? So for me a response is a way of carrying on that conversation, of moving through thinking in writing. With Corked, I had things I really wanted to talk to Proust about directly (I mean, there are issues there, particularly for female readers) so I wrote to him. But my newer work, Reveries of a Solitary Biker, is not solely or primarily a conversation with Rousseau; my Reveries use his as a starting point, and in some ways ape its form – the playing cards in the pocket, the “aimless” wandering, the simultaneous interrogation of the self and of the self’s social construction. But to return to your question, I’d say I’m driven to respond as a way of continuing the conversation, if that makes sense.

Q: Given your four published books, how do you feel your work has progressed? Where do you see your work headed?

A: Progressed, hey? It’s certainly changed, but I don’t know about progression. I’ll have to think about what’s changed and get back to you. But I can tell you that I’ve no idea where it might be headed.

Q: Is that deliberate on your part? Is your writing moving intuitively, then, towards and through what interests you at any given time?

A: Hmm. I don’t really know how to answer this question. Yes, of course, for me writing is a way of thinking through my current concerns. But it also forms them. Lately my writing has also been a means of examining, unpicking, and maybe even defending my life choices, which is new for me. But I think I’m done with that for now. I don’t know what will come next. I'm currently in a lull. They can last for a while. For now I’ll read.

Q: I’m curious about what you mean by that, “defending your life choices.” Can you speak to that at all?

A: Sure. I’m referring to my choice to carry out reproductive and caring labour for the last two decades, labour that remains largely outside the realm of exchange, and is therefore unremunerated and invisible. I’ve been reading a lot about this lately, but I've been living it for much longer.

Q: Do you tend to move quickly from project to project in a linear fashion, or do projects overlap? How do books get made?

A: I don’t move quickly at all! I’m a slow writer, and I read a lot for projects. I’m usually working on one project at a time, for at least a couple of years at a time. I might write the odd bit of occasional verse every now and then, but even those seem to reflect or partake in my current concerns. I tend to gather masses of notes, and then start trying to see what might happen with them, while continuing to read.

I find that deadlines help books get made. My neighbour, the visual artist Kelly Haydon, offered to be my “deadline” when I was writing Corked. I had to show her a new poem every week. If I didn’t, I had to make a donation to the Christian Heritage Party. I had to beg for extensions a few times, but that really got me working steadily! This was after I’d amassed a lot of notes and needed to start working with them, and stop getting distracted by more books, or my garden, or cooking, or knitting, or my kids…there’s always something else that needs doing.

With that threat hanging over me, I never missed a deadline…

A: Oooh, I don’t like this question. Answers to it have a tendency to turn into a kind of public performance of self. I read all the time, for solace, for pleasure, for comfort, for research, for clarification, for inspiration, for focus, as a means of thinking through our shared confusion. Late at night I often read 19th century novels.
Posted by rob mclennan at 10:02 AM