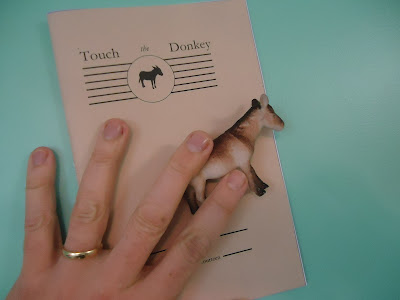 Andrew McEwan is the author of If Pressed (BookThug, fall 2017), Tours, Variously (forthcoming from TalonBooks in 2018), and repeater, a finalist for the 2013 Gerald Lampert award, along with numerous chapbooks including Conditional (Jack Pine) and Can’t tell if this book is depressing or if I’m just sad (No Press). He lives in St. Catharines, Ontario.

His four poems “from Depression Inventory” appear in the fourteenth issue of Touch the Donkey.

Q: Tell me about the four poems “from Depression Inventory.”

A: “Depression Inventory” is a series of poems from my forthcoming collection If pressed (BookThug, fall 2017), which attends to the atmospheric, economic, and emotional anxieties of language, and maintains an ambivalence about whether the word “depression” describes an emotional or economic state of being.  Formally, the “Depression Inventory” poems are based on Beck’s Depression Inventory, a questionnaire for self-diagnosing clinical depression. Each poem takes on a question category, teases it apart, and blends in language of economic speculation derived from reports of the financial crisis, and speculation about the depression-like economy of the post-2008 era. They’re anxious and speculative poems that aim for, but never achieve, diagnosis.

A: As the first poem in If pressed “Depression Inventory” strongly relates thematically to the rest of the collection. Formally, the use of systems of categorization, diagnosis, and taxonomy have been interesting to me going back to my first collection, repeater, and continues into my current project, a project titled Nature Building collaboratively written with Elee Kraljii Gardiner. I think these systems of understanding and organizing meaning, phenomena, and experience may be used to great effect as a poetic form in ways that complicate their supposed function.

A: The collaborative project with Elee came about through an inside joke that developed the first time we met. We joked about nature tropes of Anglo-Canadian anthology verse and how these formed much of the landscape in which we developed our understanding of poetry as youth and students. We decided to pull natural imagery from early Canadian anthology poetry (pre-1950) and send them to each other to write around, through, and into. Since that beginning, we’ve departed from this original premise as the conversation developed. As for your second two questions, I’m still figuring these out. Right now I’d say the difference is that the composition and idea development happen in conversation, and over a prolonged period. There are far more delays in development of new directions and ideas as we wait for the next skype call to discuss them. This has been a really great thing, though, and it’s allowed the project to develop in a very natural way. It’s changed the way I think about my solo writing insofar as it’s helping me to see writing as a conversation with my own ideas over days, weeks, years, and to slow down when ideas need time to develop.

Q: I’m always curious to hear how poets build books, especially those first few collections. What or who were your models for putting poetry collections together, and has the process of putting together your second collection been much different than your first?

A: In putting repeater together I thought of it as one integrated project from the start. Even though there are different poems comprising the appendices to the main poem they function as integral parts of the whole. I looked to models like Robert Kroetsch’s Field Work and Seed Catalogue, Kate Eichorn’s Fond, Jonathan Ball’s Ex Machina, and just about all the work of Erín Moure and Lisa Robertson. I liked the way those writers used the book as a unit of composition for delving into different areas of a central, or central group of, concepts.

Now, If pressed is similar in its book form, but felt very different to write. The poem “Of Matter Diverse and Confused” weaves throughout the collection, but the poems between stray and were written without the book as a unit in mind, just related ideas. I’ve been influenced by Spicer’s use of the serial poem in his later books since I started writing, and I’d say If pressed is slightly closer to that model than repeater was. Through the editing process the poems of If pressed became more and more entangled, so the resulting book might seem similar to repeater’s composition style from outside.

Q: With a small handful of chapbooks and a trade collection, with another on the way, how do you feel your work has progressed? Where do you see your work headed?

A: I’m still thinking on that one. My work has been connected by what I’d describe as a research-based poetics in which I mine an archive for language and turn it in on itself or mix it with another register of language. For me this is also an interest in language environments and the types of thoughts, possibilities, and foreclosures they enact. I was interested in the supposedly non-human language of binary and ways of self-reflecting through language in repeater. If pressed takes on the word and concept of “depression” and writes through early medical nosologies and taxonomies, as well as contemporary financial speculation. If pressed is definitely the most pointed and politically charged work I’ve done. My third book, Tours, variously (TalonBooks, release date TBD), goes back to a similar interest as repeater, insofar as it uses language to look at itself and its possibilities. In the case of Tours, variously, the language of guidance and touring and how the spaces it opens up are demarcated by description. My ongoing work with Elee is opening up the biggest change in my writing, as I discussed earlier, but I wouldn’t think of it as a progression, and it bears many similarities to my previous projects.

Q: How did you end up working such a “research-based poetics,” and what does it allow that you wouldn’t have been able to accomplish otherwise?

A: I’ve always gravitated toward writing that digs into a concept and its archives. I’m interested in the resonances of archives and their languages. It allows me inhabit and combine different types language that are not my own in ways that I wouldn’t be able to otherwise.

A: I return to writers like Jack Spicer, Lisa Robertson, Clark Coolidge, Noah Eli Gordon, Caroline Bergvall, Louis Zukofsky, and Erín Moure to immerse myself in a sensuousness of language it's easy to lose an awareness of, especially in the editing stages of a project. I often keep Moure’s O Cididan and Coolidge’s Mine: The One That Enters the Stories out and return to those frequently.