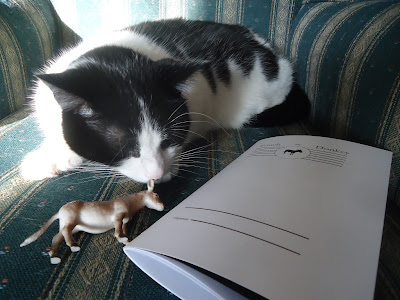 Her poem “Albany to Syracuse” appears in the thirteenth issue of Touch the Donkey.

Q: Tell me about the poem “Albany to Syracuse.”

A: Aboard Amtrak, heading home from the city, I awoke outside Albany. The poem makes its way through that corridor, adopts train’s language, a syntax of movement, of inbetween and alongtheway. Travel by train places one in such a strange space, interstitial: present and absent, seeing and being, but only in moments, place-to-place instant by instant. The solitary nature of train rides, each of us pulled down into sealed spaces, defined and separate, delineated by the newspaper, the laptop, the cell phone. The window remains the only conversant, a dialog in flow, in starts and stops, in the conductor’s voice and ticket punch.

Q: How does this piece, if at all, fit in with the other work you’ve been doing lately?

A: This piece is of the same character of the work in my Dusie Kollektiv chapbook from 2014, Philip Whalen’s Tulip. It is influenced by reading Whalen’s Collected Poems. I am interested in the simultaneous inward and outward movement of his work, its direct engagement with embodiment and being, the personal fully enmeshed in the quotidian, the political, the environment. His work marries Buddhist mindfulness to a marvelous sense of play. Serious play, playful seriousness: “art as an act of personal delight and as a consolation to solitude.” Solitude, in the aftermath of raising children (staying at home for eight of those years, working while parenting another 15), and as a result of too many cross-continental and cross-Pacific moves, of leaving home-place after home-place, has become an intimate terrain. This poem, like those of Philip Whalen’s Tulip, map a way into a new emplacement. Where am I now? What does that mean to be here?

Q: How does Whalen’s work, for you, connect to that “Solitude, in the aftermath of raising children,” and how does it shift your reading of his work prior to that time?

A: Whalen lived a rather solitary life and that inflects his work. Raising children is very often lonely work, particularly when they are young. All one’s time and attention is given over to them, except when they, and you, are asleep. Though one sees others, all too often it is in the context of the children or navigating their needs. The public library, a play group, swim classes, a playdate. There is little emotional or physical space in which to claim a life of one's own. Nor is this labor particularly valued, further heightening one’s isolation. Knowing now that reality, I would not choose again to live out in the country in a foreign nation with a newborn and a six-year-old! As to how that solitude shifted my reading of Whalen, I don’t think it did. I read him first as an undergraduate as part of a course on the San Francisco Renaissance, but at that point my interests and attention were drawn to poets such as Lyn Hejinian, Leslie Scalapino, and Mei-mei Berssenbrugge. It was only much later, in the context of a workshop with Hoa Nguyen, that I immersed myself in his work over a sustained period. Interestingly, it is the parallels between Whalen and Berssenbrugge, in the quality of their attention, that draws me to their work.

Q: With five full-length books over the past decade or so, as well as a small handful of chapbooks, how do you feel your work has developed? Where do you see your work headed?

A: The work has numerous impulses, the collections moving in response to rather divergent aesthetic and compositional concerns. Right now I am finalizing a manuscript of work based in my years in Louisiana, work largely documentary in form, often using found and collaged language, as well as handmade maps and other visual elements. The evolving work the “Albany to Syracuse” poem belongs to is more meditative and personal, composed in direct engagement with and response to the landscape and context in which I find myself now. Environmental concerns and place-sensitivity are active in both projects. My most recent published collection, Nights Reading, is an overtly political and feminist one, robed in the garments of language simultaneously sensuous and ironic. I don’t think there is an arc to my work so much as investigative impulse in dialogue with a profound love for this marvel, the spinning world transiting the heavens. Delight and disgust, wonder and horror, an abiding curiosity and (com)passion about all of it, compose the weft of the work, the question How do we live now? always just beneath the surface.

Q: You mention a shift in, as you say, “direct engagement” in your work since moving from Louisiana to Syracuse, New York. Has your work always been influenced by your immediate landscape, or is this something that has become more overt once you moved north? Is this you working to understand your new home-space through your writing?

A: Developing a sense of place, of centering myself in the flows and forms around me has been important to me for a long time, I suppose since I last lived in San Diego. We moved to a north county coastal neighborhood in ‘89 and it was in that context that my attention to the landscape and its history, its weather, the tides, the geography of mesas and canyons, the nexus of human and other-than-human that defines it became explicitly integrated with my writing. Place, however, has always been a means of grounding myself and locating myself, partly in response to moving around so much as an adult. Whether in Bloomington, Indiana, Perth, Western Australia, Lafayette, Louisiana, or Syracuse, the need to know where I am and what that requires of me in return underlies both the writing and daily life, the foundation from which all else proceeds.

Q: When you say this piece is “of the same character” as other work, does that mean there is work you’ve been doing lately that falls outside of this same character? Does your work, then, consist of a single, steady line of composition or a series of ongoing lines?

A: The documentary work for my Louisiana project is driven by a similar impulse, or at least began that way: to find a way into place. But Ark Hive, the Louisiana manuscript, quickly moved into a more investigatory mode, engaged in research, analysis, and questioning, a project informed as much by the archive as by the intimate. This poem, like those in the chapbook, returns to the latter. Though I already suspect the archival impulse will soon enough enter the writing, as well: the way history insistently levers its way through the present moment, reconfiguring what and how we know, how we are and where.

A: Ah, lovely question, especially when restoration and reenergizing are so necessary now, post-presidential election catastrophe here in the U.S. Tonya M. Foster’s A Swarm of Bees in High Court has been important this week. Alice Notley, Mei-mei Berssenbrugge, Laura Mullen, Sueyeun Juliette Lee, Bhanu Kapil, Claudia Rankine. I have recently been reading the new kari edwards’ collection succubus in my pocket (EOAGH), and that has been invigorating, as well, and writers whose work is breaking through now such as Mg Roberts, Yolanda Wisher, and Kimberly Alidio. These writers return me again and again to the urgency of writing, its potencies as well as the sheer amazon strength and wonder of language in bearing our fraught, miraculous world into vivid focus.