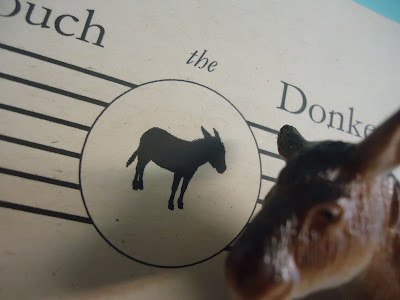 David James Miller is the author most recently of CANT, as well as the chapbooks As Sequence and Facts & Other Objects. His poetry and critical writing can be found in: Jubilat, ATTN:, Jacket2, the forthcoming anthology Precipice: Writing on the Edge, and elsewhere. He edits Elis Press, and SET, a biennial journal of innovative writing. He lives with his family in Saint Louis.

His poem “Notes on Spatial Acoustics” appears in the fourteenth issue of Touch the Donkey.

Q: Tell me about the poem “Notes on Spatial Acoustics.”

A: “Notes on Spatial Acoustics” is a series which takes as its starting point Pauline Oliveros’ notion of “Deep Listening.” Nearly each part refers to notes I took while listening to particular pieces of music, which I refer to in the footnotes, or they refer to notes I took in response to listening to environmental spaces of some kind—often some kind of ‘natural’ space. I’ve been thinking for some time about how to articulate the act of listening, as it informs so much of my thinking & activity as a poet. These are just a few pieces from a longer series.

A: I’m working on a longer project, for lack of a better word, that’s grounded in the act of listening. “Notes on Spatial Acoustics” fits pretty well, in terms of how the poems are linguistically and logically constructed.

Q: Listening can mean a great many things in regard to writing. How do you see the structure of “Notes on Spatial Acoustics” responding structurally or even visually to particular pieces of music?

A: I guess what I was getting at before is more about articulating the act of listening itself, mostly apart from any association with listening for ‘musicality’ or ‘sound’ in rhythm or meter in poetry. Instead, the (musical) pieces I refer to in these poems are all exploratory pieces, very involved with expanding into the spaces around them as sound, through a restrained compositional performance grounded in the act of listening. Listening happens across time, and is grounded in the conscious and bodily experience of and response to sound—often in those particular spaces where sound events occur. Listening remains open, as opposed to passive hearing, and is unique in this way—it’s based in a kind of open consideration that doesn’t insist on asserting a self in the way so much sound does in our current soundscape. This kind of listening recognizes the limits of sound, and it’s a kind of consideration which I also happen to find necessary to several current social and political issues—in this way, listening is a political act. So I do understand the pieces I refer to in these poems to be political, and I understand the poems as reflecting these same formal/compositional earmarks.

Q: How does this compare to some of your earlier work? How do you see your work progressing?

A: I’m still as concerned with listening as I was in CANT, but I think I’m more interested now in also allowing the poetry to articulate the act of listening topically, as much as it also describes the sound events I’m thinking of or encountering when writing.  Which is not to say this next project is only about listening—I’m also very much interested in approaching ecological and political issues more explicitly.  Stylistically, I’m still interested in ways phrasal constructs can generate certain echoic resonances across poems or sections; I think I’m also increasingly interested in bringing in to the poem less condensed language constructs alongside, or maybe contra to, other language artifacts.

Q: I’m curious about your attraction to the sequence and the longer, book-length project. Did it evolve naturally, or are there specific authors that have influenced that direction?

A: My interest in the possibilities of the serial poem began with lyric poems I found broken into parts—even into only as little as two or three parts. As I eventually began reading longer serial poems (here I’m thinking of John Taggart’s poem “Peace on Earth,” or Leslie Scalapino’s book New Time, for instance), I started thinking of the individual, serial pieces as simultaneous parallels of one another, and also as extensions or expansions of one another. It’s still satisfying to encounter poems incorporating such open possibility, and that challenge the lyric as a limited space. Still, the lyric’s limited space is often as satisfying—I think I try to keep the distance between both of these in mind as I’m writing.

Q: This reminds me of what Michael Ondaatje wrote in the introduction of the first edition of The Long Poem Anthology (Coach House Press, 1979), that the poems can no more live on their own than we can. Given your direction into the serial poem, have you moved away entirely from the single, stand-alone poem? Or is there even such a thing?

A: There’s something to that, which the serial poem explicitly acknowledges. The lyric describes a limit that seriality eludes. My most recent writing is serial mainly because of its subject matter. Although, I do actually write the occasional lyric poem—written from the perspective of a personal “I.” I’m not sure right now that I want to do much more with them other than continue putting them in a folder somewhere. For the past couple of years, I’ve been thinking of the lyric’s particular capacity to describe lived, material experience—this seems more and more important to me, given the trend toward an experience of living that’s increasingly mediated through all things digital. Of course, this is one reason why I’m so interested in the act of listening, which for me is connected with the serial poem (at least for now).

A: Gustaf Sobin immediately comes to mind, which is funny to me because his writing is very much grounded in the individual poem, but incorporates the serial, and is also very stylistically and thematically linked—I absolutely love his writing. Also: Etel Adnan, Lorine Niedecker, Leslie Scalapino, Akilah Oliver, John Taggart, Peter Larkin, H.D., Brenda Iijima (I see you just published a chapbook by her, that’s excellent!), JH Prynne, Will Alexander, E. Tracy Grinnell, Michael Cross, George Albon... Also, I really love the recent Chika Sagawa translation...

Thank you rob, it’s great talking with you!