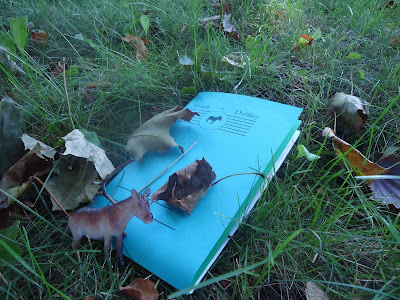 Kemeny Babineau’s work has appeared in Rampike, Carousel Magazine, PRECIPICe, Stone the Crows, fhole, Damn the Caesars and other publications over the years. His most recent titles are Poems of Days (self-published) and The Blackburn Files (above/ground press). He has one trade publication with BookThug, After the 6ix O’Clock News. Babineau runs an out-of-print bookstore called Laurel Reed Books as well as a poetry micro-press of the same name. Earlier this year he saw the birth of a new book with Angel House Press.

His sequence “The Log of Wonorata” appears in the eleventh issue of Touch the Donkey.

Q: Tell me about the sequence “The Log of Wonorata.”

A: It is an erasure poem. The source text is a book I once bought mistakenly due to the author sharing his name with poet Charles Olson. It is an adventure logue.

Q: How does this fit with the work you’ve been doing lately?

A: Funny that you’d ask. It doesn’t fit at all. It does continue some work I did a year or so ago, in a sense, but I haven’t composed in erasure for several years. Lately I have gotten away from games of content manipulation generators and have been chasing more conventionally written poems. Erasure is at the opposite end to that as none of it is written by you.

Q: Is this part of a larger piece or something you see yourself continuing?

A: I am beginning to see outlines of something, but I don’t tend to work that way. I see my process as more aleatory. The shape completes itself. Content and direction are driven by what I do in day to day life and by my interests. I don’t have something in mind to write about; something to write about comes into my mind. So for me patterns and plans are in retrospect.

Q: As the author of a mound of publications over the past decade or so, are your structures entirely informed through intuitive means? Is there a difference at all in the way your chapbooks were constructed, versus your full-length collection?

A: No, not all. I have written teleologically before, or have attempted to, but I tend to fizzle off and become disenchanted with the results. I felt like it was too easy, almost unearned, and I felt the results bordered on the disingenuous. I began to distrust the process based on the results. My most prescriptive piece is The Incomplete Tree Guide published by Wot Press in 2005. I set out to write a poem everyday using a different tree or shrub as the starting off point each morning. I liked some of the results and I am proud of some of the work in it but overall I was dissatisfied so I abandoned both the project and the process. I think I work best in short sequences. Putting together manuscripts for trade publications is a real challenge for me, I don’t see ahead that well and end up just kind of cobbling things together as best I can. It is a kind of poetic myopia I suffer from and no corrective lenses will help.

Q: Given your numerous collections over the past decade or so, how do you feel your work has developed? Where do you see your work headed?

A: I am headed in several directions at once. Some are what I think of as pure poems, grounded in observation, written in the Nelson Ball style with an emphasis on image, clarity and sound. Other directions are more exploratory. It is difficult to reconcile the two. One of my larger uncompleted projects is a history of Canada in verse, A Furrtive History. This is driven by my interest in history and politics. When I write a piece that I feel fits I find a place to plug it in. It is an unwieldy project but I see it as a life work. Parts of it have been published in other projects but overall it is far from polished. It really is the kind of project that will never be finished, it blows by perfection.

Q: I’ve seen less of your work over the past couple of years. Is that part of that tension between writing and perfection, or are you simply working in further directions? And how does your AngelHousePress title fit into the mix?

A: I have never been a prolific writer, and I am slowing down, but I do really want to say things. My AngelHousePress chappy, The House of Many Words, is totally different from anything else I have done to date. It is written as play, a word play.

A: Well, it is a play on words, most plays consist of words so they are in a sense all word plays, but House of Many Words is written as a play that isn’t necessarily meant to be performed. That doesn’t mean it couldn’t be, there are staging directions provided. Also, part of its structure is punning on characters names. Many Words is a character in the play, along with Nobody, Many People and Land Barren. It is more of a poem than a play, so I call it a word play.

Q: You mentioned poet, publisher and bookseller Nelson Ball earlier as being an influence. What other writers have been important to your writing?

A: Nelson Ball has become a close personal friend over the years and his poetry has rubbed off on me, we are quiet moths in the corner of the room. Charles Olson’s big, open field poetics has also been a large influence. Other strong influences are bill bissett and John Newlove. I want my poems to sing like bissett and weep like Newlove. Jackson Mac Low figures in there too, his book Twenties really opened things up for me.

A: Charles Olson, The Maximus Poems, I return to that constantly. It is so huge, like a planet of its own. Dennis Lee’s work contains a lot of energy for me as well, The Unpoems, Yes/No, Riffs, great playful stuff.  But discovering new poets and new work is vital. Latest gems have been Mary Ruefle and Joseph Massey. Just finding that work that really clicks with you, that’s like acetylene.