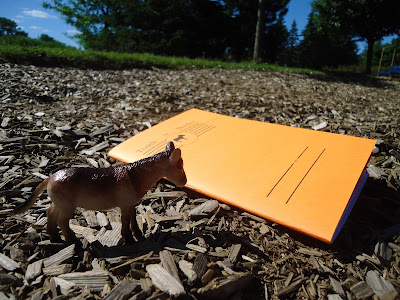 Meredith Quartermain is a poet and fiction writer whose most recent book is I, Bartleby, a book of stories. Her other titles include Rupert's Land: a novel, Recipes from the Red Planet (shortlisted for a BC Book Prize for fiction), and Vancouver Walking, which won a BC Book Prize for poetry.

Her poem “Breastwork” appears in the tenth issue of Touch the Donkey.

Q: Tell me about the poem “Breastwork.”

A: One of the things I was thinking about was the dictionary definition: “a low, temporary defensive work, usually breast-high; also called a parapet” (Funk & Wagnall).

Q: Is this a stand-alone piece, or part of a larger construction?

A: At the moment it’s on its own or perhaps with a number of other autobiographical pieces.

Q: What prompted the shift into more autobiographical pieces?

A: There are those who would say we never write anything but autobiography, since almost any piece could be said to mark trails in the sands where we have meandered.

Q: True. But then, why specify “other autobiographical pieces” unless this were a shift you were already conscious of?

A: Well, I think some of my pieces are obviously autobiographical in that they seem to relate directly to the body of the putative author, i.e. me, while others though still written very much out of my own experience, throw up various disguises, i.e. narrators that seem less obviously related the body of the putative author. In this case the piece recounts pretty much as it happened an actual event in my life in the so-called “real world.” A lot of Nightmarker is autobiographical in that way in that it recounts various trips around the city. But autobiography is fiction of course.

Q: You’ve been working predominantly, it would seem, on fiction over the past few years. What brought you back to the prose poem? With this piece, where might your work be heading?

A: “Breastwork” was written several years ago, but now that I’ve ventured into fiction more fully, I’m beginning to see how these earlier pieces which I didn’t know what to do with could work together or lead to more pieces.

Q: I’m curious about the return to older, seemingly stand-alone pieces. Is this a normal element of how you write, and potentially construct book-length manuscripts? Are poems composed on a piece-by-piece basis and sometimes collected far later, if at all?

A: I, Bartleby was a planned book. Every piece written to fit with in its exploration of writers and writing. But before that, since Recipes from the Red Planet, I had been experimenting with short prose pieces. I’m still experimenting now, writing individual pieces and exploring where they might go. So who knows some may be gathered into a future collection, especially if they lead into a series of pieces that explore an idea.

Q: It sounds as though your manuscripts are explorations: first, of form, and second, of subject or idea. Is this a fair assessment? What do you feel you’ve not yet been able to articulate through the space of the prose poem?

A: Right at the moment, this is true, I’m sticking to narration and story telling. As to what I haven’t been able to articulate, well, I guess I haven’t found out what voice and what thoughts can emerge from this method of thinking. I guess you could call them thought experiments, in a way.