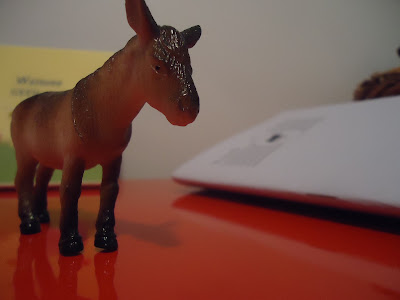 His poem “SOLID GROUND —SIXTH WHALEBONE,” translated by Erín Moure, appears in the ninth issue of Touch the Donkey.

Q: Tell me about the poem “SOLID GROUND —SIXTH WHALEBONE.”

A: In the poem Sixth Whalebone, from My Dinosaur, there is a passage where the father has run aground on a beach, swallowed by the sun. It follows scenes of a shipwreck and a windstorm. In this scene, the father seems dead, lying under the sun. This poem appears just before the end of the book, and speaks again of a disappearance. Here, the weight of memory of a father is heavy, like the whale, like the dinosaur. Both animal metaphors are gigantic, childish and excessive. The dinosaur of the book is at the same time the father, my own father, a man from another epoch whom I try to reassemble, and the absent figure of an animal bigger than nature who fascinates me. This animal has obviously faded, passed away, is no longer living but exists in representation, and that brings me immediately to my own father’s departure.

My Dinosaur is an excavation project, a research that digs around the father figure, whose story is that of a recent past. The whale appears in the last part of the book: here, seven whalebones, seven watery souvenirs of past summers are related. In them, my father, like an enormous mammal of the shallows, arises misunderstood, run aground, in small boats, under water or floating as my memory. I play here with the word “whale”, the cetacean of the depths – another icon of childhood (as the dinosaur of the title) that lets archaic images emerge. On another level, the “whales” refer also to the whalebone stays that stiffened his short collars, small plastic or metal lathes he kept in a small box – the Box of Whalebones stays. Two scales then collide together: the tiny whale, erased, those of the collars of my father that remind me of my memories, and the whale-father, obviously more heavy, the one who navigates in the dark depths of childhood waters.

Q: The structure of exploring childhood through a narrative surrounding the metaphor of the whale is an intriguing one. How does this work compare to your prior books? How does the composition of such a book usually begin?

A: In fact, the exploration of childhood using metaphors is rather recent in my work. I’ve only explored animal forms since My Dinosaur. But after that book, I became more fascinated by child’s play. I just finished a new collection of poems that is populated by many animals. I’ve dedicated the book to my daughter, to the ideas of memory flashes-before-memory, where the poem is a cross of micro-stories, fragments and prose. Dozens of animals punctuate this new project, appearing suddenly, becoming images and representations of fears, laughter, dread, desire, etc. But “animal presences” do not always appear in my first books, where it’s more the “family souvenirs” that I explore, trying to detect and follow the paths of memories.

And to answer your question, each of my books has a precise focal point, a specific subject: a night walk in the forest, a house history, a father, a child. These are the things that fascinate me. I investigate what lives close to me, by creating writing platforms related to family archaeologies. I like that a poetry book presents an architecture, one or many narrative veins, and the “excavations” that I propose in each project are linked to a quest after clues, which are collections of past traces, reconstructions... where the line between imagination and reality is thin. In a way, I follow trails to question memories and to structure them the trails become clear in the writing process. My books are then always related to a narrative deployment, as fiction can be. In this way, poetry becomes close to fiction.

Q: I’m curious about how My Dinosaur, as you say, is “an excavation project.” What first prompted you to explore your own childhood and history in such a way?

A: First, this book was conceived over few years: I spent a long time searching its axes, its voices, its pulsation. To tell the truth, I’d always promised myself that if I were someday able to “investigate,” to write about my father’s world, I’d do so. This Dinosaur, this enigmatic father, before being a book, was a pretext for collecting memories – mine first, his, and all those that I may have invented... I then started to conceive this “character”, because he was one, not just like a parent as seen by a child, but also like a hypothesis formed by a detective, by an archivist faced with disorder, an archeologist in front of too many approximations... And all this was conducted in angular ways, breaking with chronology, so as to get closer to his life.

To circumscribe a life is clearly impossible, for like any History, it can only be uncovered in fragments. It became obvious, in inventing stories of my dad (more than a hundred in My Dinosaur – both ordinary and extravagant) as well as accumulating them, that I would end up telling his story, or a story that seems to be him. To do this, I use lyric poems, fragments of letters, narrative pieces, prose or free variations, in verse form or not.

And then, to avoid pathos, because it’s not always pertinent to hear about someone else’s father, to open up the reading a bit more, I played on biographic strategies, insisting on the anonymous aspect and the daily life of a man who could be or not be my father, especially in the Prehistories section, the heart of the project. I do think My Dinosaur as a book on the Father, but not only mine, for it points in many directions, targeting many epochs. This also creates, I hope, an alternation between distance and proximity in face of this man who could, despite his inimitable presence, be somebody else...

Q: After a small handful of books published over the past decade, how do you feel your work has developed? Where do you see yourself headed?

A: When I look at this decade, I clearly see a focussed movement – the more I write poetry, the more I commit myself. Here I think about both the nature of the topics covered and the way I consider or envisage lyric forms. What is sure is that I constantly search to elude and foil myself, to surprise myself and to place myself in “risky situations” where I explore a specific subject – sometimes a delicate one, with, I hope, an originality. Each of my books is then very different as much in the formal approach as in the architecture or purpose: they point at diverse directions, so that – when I put all my books in perspective, I can perceive the ensemble like a “small constellation”, where each book has its own motive.

And where I see myself  headed ? As I mentioned, narrative forms always interest me, so I will probably work on a “novel” over the next few years. I use the word novel, but let’s say a story. And poetry, of course! Also, my new book will be published this fall by Le Cormier (Belgium) and La Peuplade (Quebec). After that, even if I have intuitions, even if I try to imagine the next books, the future is a real riddle...

Q: I’m curious about your relationship to your works in translation. How close do you feel to a book of yours translated into another language?

A: So close... Erín Moure’s translation is clear, sensible, precise, rigorous and inventive. A real poïesis happens – as she mentioned herself in the postface entitled Si Moure traduit Turcot : a Book of Hours becomes a Book of Ours. Also, I had the chance to talk with her about the text, about some questions related to the lexicon, about the different perspectives. Our communication has always been open. I then read the English Dinosaur a few times and felt involved with the translation process. Erín always explained to me her decisions or ideas generously. I learned a lot from those discussions. Also, we both decided to include some pictures – an iconic dinosaur from the Calgary Zoo, and a photo montage of our Dads after the postface. Then, Jay MillAr and Hazel MillAr at BookThug welcomed those propositions and the photograph by Dianne Chisholm – the luminous and melancholic landscape for the cover. Because a book is a combination of details, all those elements make me feel very close to Erín Moure’s work. But, even given this strong feeling, obviously it’s always special when a dinosaur speaks another language...

Your question makes me think of this anecdote. Recently, a friend of mine told me that he really read his book for the first time in English translation. He said that it was maybe the only way to feel a real distance from his work. That’s interesting – the idea of suddenly becoming a new reader of your own book, discovering other strategies... I can understand this posture, but it’s hard to explain.

Q: What authors have influenced the ways in which you put a manuscript together?

A: Well, many, I guess. It really depends on the book I’m working on. Because reading and writing are feeding each other, my projects are influenced by different perspectives. In my previous three books, I thank authors that, for one reason or another, are related to my writing process. For Cette maison n’est pas la mienne, W.G. Sebald has been essential; for My Dinosaur, Bruno Schulz’s The Street of Crocodiles, for his particular lyrical way of writing about the father – and Les heures, by Fernand Ouellette. I have to say that Erín Moure’s books have a very special place in my bookshelves, as well as others by many innovative writers who open spaces between literary genres, playing with possibilities.

A: Julien Gracq’s books have always reenergized me; W.G. Sebald’s prose and narratives strategies (the way he explores archives, history, etc.) have been a crucial influence on my relation with literature; Hervé Bouchard’s “fictions” that hover between novel, theatre and poetry excite me; and all the eclectic work of Daniel Canty – a close friend of mine – with his “unclassifiable practice” and his great translations of Charles Simic, Erín Moure, Stephanie Bolster and Michael Ondaatje. Also, obviously, there is the work of many Quebec poets whom I have been following for a while – Martine Audet, Gilles Cyr, Nicole Brossard, Pierre Nepveu, Roger des Roches, Elise Turcotte, to name a few. And so many talented younger Quebec poets around me, for sure... But it’s funny, to really answer your question, even though I write poetry, fiction and prose authors still occupy a central place in my reading habits. One thing is clear to me: all is in the manner of telling and being told...

Thank you, rob, for this interview.