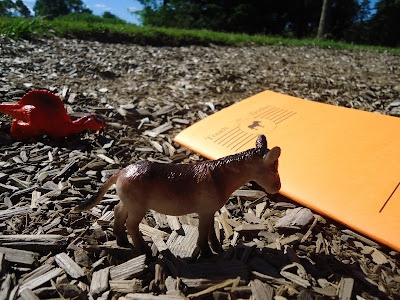 Amanda Earl is a Canadian poet, publisher and pornographer who lives in Ottawa, Ontario. Her most recent published works are A World of Yes (DevilHouse, 2015), Coming Together Presents Amanda Earl (Coming Together, 2014), Kiki (Chaudiere Books, 2014), A Book of Saints (above/ground press, 2015). For more information, please visit AmandaEarl.com or connect with Amanda on Twitter @KikiFolle.

Her “three untitled poems after Vasko Popa” appear in the tenth issue of Touch the Donkey.

Q: Tell me about “three untitled poems after Vasko Popa.”

A: I first encountered Vasko Popa in my University of Ottawa English 4398 creative writing workshop with Seymour Mayne in 2001. We were asked to study specific poets. I ran across the anthology The Poetry of Survival: Post-War Poets of Central and Eastern Europe, Daniel Weissbort, ed. (Anvil Press, 1991). I was particularly interested with the way these poets (in translation) handled the brutality and trauma of the first and second world wars. They had various strategies to speak out against injustices, to deal with the horrors of concentration camps, but they had to get past the censors. Vasko Popa, in his series “Quartz Pebble,” and in other poems, personified abstractions. I’ve always been fascinated with this. In a time when censorship is increasingly on the rise, not just from authorities but also within peer groups, it is hard not to think about this time as a constraining era of suppression and repression. I’m fascinated with the way Popa used geometry in his poetry, such as “The Little Box Poem”: “In your four-sided emptiness/We turn distance into nearness/Forgetfulness into memory”

Q: You’ve long been exploratory in your writing, and utilizing large projects. Are these poems part of a larger, longer project?

A: Those are the first three, but I already have a few ideas for more. I thought I was writing only the one poem, but that poem suggested another poem, etc. so...possibly.

A: I’m going through a period of attempting minimalism, which I’ve been working on since the summer of 2015. working with shorter lines, little punctuation or staccato breaks. before that I was in a more accumulative, expansive horror vacui phase.

Q: What prompted the shift towards minimalism? And when you say minimalism, are you thinking of a particular lyric density, or a complete minimalism, a la Nelson Ball?

A: For the last two years, I’ve been working with poet, playwright, novelist Tom Walmsley and reading his work. His ability to say a lot with few words has been a great influence. We even wrote haiku together, a form I couldn’t stand before Tom’s influence.  Also, I tend to be a rebel. I don’t like to do things the same way. My motto is “expect the unexpected.”

Ok, googling “lyric density” and found this from a piece on song writing: “the number of words that must fit within a measure.” I like the idea of that. How does it apply to poetry? Perhaps on the level of sound, number of syllables that fit into a breath. I’ve always played with the line and the breath in my writing, creating a line long enough to make the reader breathless at the end of it. Minimalism allows for more breathing room. That’s my current thought anyway.

A number of years ago Stephen Ross Smith gave a great reading at the Manx Pub as part of the Plan 99 Reading Series from his fluttertongue series of books. There were a lot of pauses and silences in his work. It made the words resonate more and as a reader, I was able to have more time to think about what I was hearing.

I’m just trying to see if I can take up as small a space as possible while having imagery that resonates and ripples outward. I’m a small person but can pack a powerful punch. Just before this phase, I was interested in trying to work in conversational words in my poetry. Stuff like adverbs, repetition of words that play no function except for connection or reassurance with the listener. Now I’m paring things down. perhaps leaving more space for the reader/listener.

After my health crisis in 2009, I felt the need to declutter, to get rid of items in my life that were extraneous. to eschew the material in favour of the spiritual. This need is now working its way into my poetry. When I plummet, I want to do it lightly and leave no trace. perhaps the next phase of my writing will be inkless.

Q: With a published trade collection and a growing mound of chapbooks to your credit over the past decade or so, how do you feel your work has developed? Where do you see yourself headed?

A: I don't know how to answer the question of how my work has developed. Each work, for me, is its own thing. What is the mark of growth or development for a person who does any kind of creative work? am I better at it now than I was a decade ago? I’m more opinionated about what I’m doing perhaps, but I always have beginner mind. Every work I try is something new. As long as I’m not boring myself or an audience at a reading, I’m ok.

If development means getting the opportunity to have more work published or do more readings, perhaps there things have improved. But to be honest, I’m fine with being obscure and in the margins. It’s easier to try a somersault on a high wire and fall if no one’s looking than it is if all eyes are on you. I have a few manuscripts at the bottom of publishers’ slush piles, which probably need retooling and sent out again so they float to the top.

I have other manuscripts I should probably revisit, and I will when the mood strikes me. The only kind of development that matters to me is to be more open to exploration and trying new things. The day I say no to exploration, I might as well stop writing and start a parking lot business. I wouldn’t mind having more books published, but aside from sending stuff out and hoping it resonates, I have no control over that. If I get impatient and feel that something needs to be out there, I can always publish it myself, like I did recently with my erotic novel, A World of Yes, which I published as an e-book through DevilHouse (imprint of AngelHousePress).

I have no particular plans, I just go where the work takes me. I become fascinated or obsessed with something, a piece of art, music, film, a snippet of conversation, the biography of some obscure person or an image, and I let my curiosity lead me to reading and thinking and writing about it.

I’m fascinated right now with hybrid forms that resist genre labels. I’d like to write a long poem that works somehow as a piece of theatre.

Q: Do you see yourself eventually branching out into other genres? So far, you’ve predominantly published poetry, but have been moving slowly into prose-specific projects. Or is genre something you see more fluid, attempting to incorporate structures from different systems into the scope of the poem?

A: I’ve been writing short fiction now for over a decade, mostly smut. I’ve just started a new collection of linked short stories. I like the idea of pushing the expected boundaries of genre and of fluidity. rather than any specific intent, I’m more interested in seeing what happens by being open.

Q: How does your poetry interact with your fiction? Do the genres converse, or are they entire separate?

A: Both require an ear. i read everything aloud to ensure it sounds right. i’ve written characters in poetry but fiction allows a deeper exploration of character than i have done in poetry.

in a few cases, I’ve had an image in mind that has recurred. I’ve written both poems and stories using that image. so poetry and fiction can interact for me. One of my poetry manuscripts, All the Catharines, features a character speaking to its author.

I read somewhere that poetry is not fiction, but I think it can be, in the sense that things can be made up. A recent poetry manuscript that I started called Grace, involves the character of a woman in her 50s. I’m using some of the techniques of fiction, specifically accumulation of details and pacing to create an impression of the whole character. A lot of narrative poems employ fiction characteristics, include character, plot, setting, etc. epics, for example. I think genre lines can blur.

The techniques of poetry have also informed my fiction, which fiction has become sparer too.

Carson’s Eros the Bittersweet; Walmsley’s Honeymoon in Berlin, What Happened; Je Nathanaël, Cixous’ Firstdays of the Year; Kroetch’s Completed Field Notes; Cooley’s The Bentleys; biographies and memoirs set in Paris between the wars or in New York in the 50s, stories of rebels. Kerouac’s On the Road...Victoria Finlay’s Travel Through the Paintbox, Diane Ackerman’s A Natural History of the Senses...Andrew Lang’s Fairy Books.