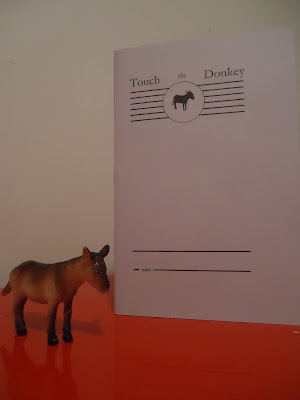 Sarah Cook’s newest chapbook, You’re Just an Object To Me, appeared from our teeth press. Her work has recently appeared in The Feminist Wire and Illuminati Girl Gang. She is an Assistant Reviews & Interviews Editor for Horse Less Press.

An excerpt from her “LOVE POEMS” appears in the ninth issue of Touch the Donkey.

Q: Tell me about “LOVE POEMS.”

A: These poems started with a really basic conceit: I wanted to write one love poem a day for a whole month. I almost always fail at such structured goals, and so I wrote a small batch of them and then abandoned the project (though not the love itself!). Each poem starts with an epigraph from another poem I was reading, either recently or that day, and I like this method because I work well with prompts but not prescriptiveness. So a fragment from another poem becomes a way in, so to say, to a new one.

I came up with the title somewhat casually at the last minute, for the sake of naming the project, of calling its projected wholeness into being. But it’s probably not a coincidence that Anne Sexton’s book of the same name is very symbolically close to me at all times.

Q: Is working with and from prompts the way you usually compose? How is this current work different from the writing you’ve done prior?

A: I think I do often work from prompts, but I would clarify that most of the time that just means I read a lot. A few years ago, I had this very distinct realization that when I’m experiencing something like “writer’s block,” the trick for getting through that is not to push toward the writing but to read more & more & more.

I want to make this comparison with learning a foreign language: there is so much emphasis placed on speaking immediately that it sometimes hides how much work can be accomplished through active listening. I’m not a parent but don’t babies not talk right away? They’re just surrounded by language for a while, listening. When I surround myself with good poems and good poets, I find ideas or prompts—or I even just occasionally misread a line and then find myself writing the poem that follows.

So I guess my process of being prompted is really a development of my listening skills. Like, even if you’re not a student with homework and people telling you what to do, if you listen well enough you’ll find the things encouraging you to write in response to them. It reminds me of this great line by Ursula K. LeGuin: “Listening is not a reaction, it is a connection. Listening to a conversation or a story, we don’t so much respond as join in — become part of the action.”

Q: You mention Ursula K. LeGuin: what other writers or works have influenced the ways in which you work?

A: Maggie Nelson in a big big way. Kate Zambreno, Sawako Nakayasu (I want to say that Texture Notes was a kind of gateway book for me). Nicole Brossard and specifically this idea of the question(s) that the writer seeks and repeatedly comes back to. Anne Sexton was one of my entry points into the poetry world at a young age, and then I grew out of her, and then I came back to her with a totally different and complex relationship (like she went from being mother to friend). Eileen Myles, whose poems I love but Inferno might be my favorite thing ever. TC Tolbert. Kate Durbin, especially her performances/presentations of self, and her thinking around Lady Gaga. The original Gurlesque anthology was a huge thing for me to discover. A lot of writers whom I found in Women’s Studies classes: Audre Lorde, bell hooks, Judith Butler. Kristeva (and her discussions especially of cyclical vs. monolithic time—that’s an idea often present in my thinking). I think Julie Choffel’s poem, “Serenade, or After Others,” is an example of a truly perfect poem. Diane Arbus—not just her photographs but her texts, her journals—she is a model of thinking for me right now.

Q: After a couple chapbooks over the past five or so years, how do you feel your work has developed? Where do you see your work headed?

A: I’m definitely more and more invested in projects, in serial works and the building of little interdependent poemworlds, versus one-offs or things that may work primarily in isolation. I find myself using the space of the poem as a space for thinking through, for asking questions and circling around ideas repeatedly and retracing my steps. I think my poems are becoming more essay-like and my essays more poem-like.

Maggie Nelson talks about knowing the real limitations of language (informed by Wittgenstein), but believing, somewhat romantically, that words are still good enough. I’d like to get to the point where I really know in a big way that to say “words are good enough” and “words aren't good enough” is basically the same thing.

Q: You speak of a kind of meeting-place between “knowing” and “unknowing,” almost as though you prefer working intuitively, but after an enormous amount of reading, research and thought. Fred Wah has referred to composing as a kind of “drunken tai chi,” wishing to slightly throw himself off-balance to keep his skills sharp, but not stringently so. How do you find your own balance between the two?

A: I like this question and it makes me nervous. I talk a lot about being interested in failure, contradiction, ambiguity, but I think constructed failing is much different than actually finding that tenuous space between balance and falling over. I mean, to theorize about the body and intimacy, and to study & read & consume & think, is not the same as actually opening up and being vulnerable. Have you ever tried to fall over—like, pretended to fall for humor? & then have you ever tried to balance your body at the farthest edge of its tipping point? Maybe not actually ever falling down, but feeling your body get close, and that sudden spring of catching yourself? In my experience, the latter is much more frightening—even if you never touch the ground—and tells you a lot more about what it means to find your “safe edge” (thank you, TC).

I have the urge here to quote Mary Ruefle: “You simply cannot learn and know at the same time, and this is a frustration all artists must bear.” I think the process of learning is a lot less stable than how we sometimes conceive of it, growing up in school settings where learning often looks like memorizing and repeating things back to the teacher that you've already heard. Perhaps when we’re the most open to learning, we’re not only starting from a space of unknowing, but entering further into one as well. But that takes courage. I’m an adult and it’s so so hard to be brave. You have to be willing to explode. And that willingness is so much more difficult to achieve than the exploding itself.

A: A lot of people I’ve already mentioned would come up again here. But so many things besides reading reenergize my work: hiking, especially thinking while moving/walking; being around animals; cutting my hair; being near water; roller-blading. Taking instant photos, or just analogue photographs in general. Going on dates with my boyfriend. All these things reenergize my living, and how I move through space, which is how I write. In fact, remembering that my writing life encompasses all of my life is in itself a rejuvenating (and usually difficult) act, it helps facilitate the (self-)permission needed to live how I’d like to write, and vice versa: a lot of stretching, growing bigger; a lot of questions, and leaning into fear rather than away from it.

But also: the amount of times I’ve come back to Anne’s transformation of Rumpelstiltskin:


He laid his two sides down on the floor,
one part soft as a woman,
one part a barbed hook,
one part papa,
one part Doppelganger.