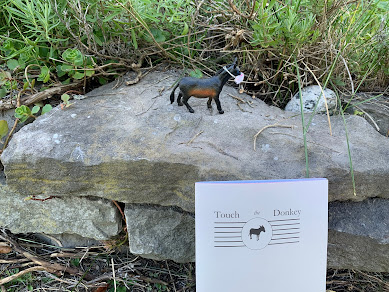 Monica Mody is the author of Kala Pani (1913 Press), the forthcoming Bright Parallel (Copper Coin), and three chapbooks including Ordinary Annals (above/ground). Her poems have appeared in anthologies including The Penguin Book of Indian Poets, Future Library: Contemporary Indian Writing, The Red River Book of Poetry of Dissent, and &Now Awards 2: The Best Innovative Writing. Her poetry also appears in Poetry International, Indian Quarterly, Almost Island, Boston Review, and other lit magazines. She has been a recipient of the Sparks Prize Fellowship (Notre Dame), the Zora Neale Hurston Award (Naropa), and a Toto Award for Creative Writing. Monica was born in Ranchi, India, and currently lives in San Francisco—Ohlone territory.

Her poems “Mouthfuls,” “Spirit of Regeneration,” “Alchemy” and “In Situ” appear in the thirty-fourth issue of Touch the Donkey.

Q: Tell me about the “Mouthfuls,” “Spirit of Regeneration,” “Alchemy” and “In Situ.”

A: I happened upon “Mouthfuls” when I opened an old fellowship application packet earlier this year. I didn’t remember receiving it, revising it. I have a habit of putting away poem drafts in a folder to come back to later, and when I go back to those drafts, they sometimes surprise me—but this was not a draft. It felt like it had arrived almost fully. This made “Mouthfuls” a gift.

“Spirit of Regeneration” was written as an invocatory poem for the summer solstice ritual marking Earth Activist Training’s 20th anniversary and the 70th birthday of its founder, permaculture teacher Starhawk, in June 2021.

I wrote “Alchemy” in January 2022 when I was asked to write a haiku about ‘myself’ in a non-literary community.

“In Situ” is one of the poems in an emergent series steered by my inquiry as an immigrant in the United States.

A: Some of my other recent poems have been interested in remythologizing South Asian mythic figures such as the yoginis or the river/goddess Sarasvati, who governs speech and music, among other things. (You can watch/listen to the poem “Sarasvati” here.) There are somewhat different concerns at play in that series of poems—decolonial feminine concerns, stemming from the particular South Asian histories of colonial modernity and nationalist patriarchy. And, the four poems in Touch the Donkey—with their interest in language and its music, belonging/not belonging, the confluence of earth-based spirituality and nondual ethic—certainly traverse and play on similar ground.

Q: You say you put drafts away in folders to return to later. Does that suggest you work on multiple pieces simultaneously, setting some poems aside when you get stuck, and returning to prior drafts to see if fresh eyes make the difference?

A: It’s more about separating the generative phase from the revision phase. I often generate much more than I take to completion—but it’s nice to have the ‘raw material.’ As a transdisciplinary practitioner, I don’t work only on poems—when I do, and yes, if I get stuck, it often helps to set aside the poem for a few hours or few days—sometimes longer—so that the poem can find the breathing space and resolution it needs.

Q: I’m curious about your interdisciplinary approach: how separate are the various practices through which you work? Do you see your practice as a series of discrete, or even interconnected, threads, or all part of a single, ongoing, singular practice? And how does your work in one form impact upon your work in another?

A: These practices are indeed interconnected—even though each of them emerged at different points and out of different imperatives in my evolutionary trajectory. More and more, I see my work as listening to the pulse of the sacred and bringing it into form. “The sacred”—for me, comprises the earth and kin networks she anchors; breath and womb and body; beginnings and endings; the small and the vast and the dark and the light; ancestral and spirit-realms; pilgrimages across waters or dimensional spaces; laughter and grief; communal and personal sovereignty; restorying pasts and patterns that exclude or extract; continuity of wisdom and the process of change. I don’t see living as being outside the purview of art—living is a practice of the sacred too. Out of chaos into form.

Q: With one collection published and one that will be published soon, and three chapbooks, how do you feel your work has progressed? Where do you see your work headed?

A: I’d say the books variously track my engagement with formations of identity, explorations in language and genre and embodied consciousness, reclamation of ancestral and motherline memories, contouring of the intersections of earth/spirit/dissolution.

I hope my work continues to take up and grow more capable in the task of reshaping reality!

Q: Do you have any models for the kinds of work you’ve been attempting? Are there any particular writers or works in the back of your head as you write?

A: Hmm, I have a resistance to the idea of “models” at this juncture in my writing/life. I don’t have other writers or works at the back of my head as I attempt to write. I have urgings and intensities. These could be ideas. Images. Visions. Emergent knowings that arrive as language.

I wonder, on this literary map we are etching as I/we write, what is the song that will guide us to the precipice, and then invite us to take another step? What comes after we take that step? What could source and shape my/our writing that has not come before—at least not a past that traps us in pre-existing models.