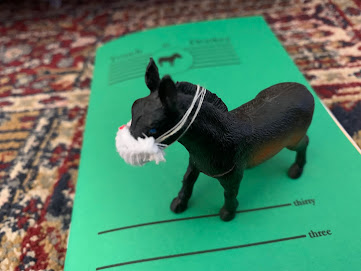 Benjamin Niespodziany’s work has appeared in Fence, Fairy Tale Review, Sporklet, Maudlin House, and others. Along with being featured in the Wigleaf Top 50, his writing has been nominated for the Pushcart Prize, Best of the Net, and Best Microfiction. His debut chapbook, The Northerners, was released at the end of 2021 through above/ground press.

His poems “Froth and Whip,” “The The” and “Bob Heman” appear in the thirty-third issue of Touch the Donkey.

A: Both “Froth and Whip” and “The The” are prose poems that focus on the line, the visual, the rhythm. Less about narrative and sense and more about sound and experience. “The The”, in particular, is inspired by the writing of Eric Baus, whose collection The Tranquilized Tongue features poems where every sentence begins with “The”.

“Bob Heman” (after Bob Heman) pays tribute to one of the unsung greats of prose poetry. If you Google “Bob Heman Poetry”, the first search result will be a publication where he showcases 17 poems, all of which are called INFORMATION. It inspired me to write 17 poems called Bob Heman. This is one of them.

A: These poems are more nonsensical and abstract than what I’m currently writing. I’m working on two manuscripts that deal with my childhood as well as some domestic fictions, and while the poems within are still absurd and surreal, they’re a bit more grounded in narrative. These poems (which were written in early 2021) are more hallucinatory and atmospheric and free-flowing. More collage and less plot.

Q: How complicated is it working on two manuscripts simultaneously?

A: I prefer it! If I hit a speed bump or a road block, it allows me to step away from one while still being able to work on my writing. I have numerous, numerous manuscripts at various stages in their respective journeys, but these two in particular that I mentioned above are about 95% done.

Q: How did you get to the point that you’re working multiple manuscripts simultaneously? And, further to that, do you then see your work as a large, singular project, or a series of related or interrelated threads?

A: BOTH! One large project and many connected threads. I tend to freewrite then edit then later compartmentalize. For example, I have a manuscript of poems that all take place in a library (where I work), I have a manuscript that all deal with faith (and questions of faith, and God turning into a bog witch, etc.), I have a manuscript where every poem is contained within one neighborhood block. I really try to find a through-line when it comes to forming a manuscript (instead of a collection of 'best of' or favorites) or else I won't know where to begin.

Q: Have you any models for the kinds of work you’ve been attempting? Have you any particular writers or works in the back of your head as you write?

A: The hundreds of books that line my shelves and cover my ottoman constantly circle through my brain.

For the lyric/rhythmic image-based poems featured here, I was drawn to Eric Baus, Bob Heman, Donna Stonecipher (her collection The Cosmopolitan is a favorite). Another to mention is C. Dylan Bassett, whose collection The Invention of Monsters really opened my world and shattered my glass ceiling in regards to what I might be capable of within a prose poem. Pitched as ‘plays for the theater’, these wild prose poems were also sold as a deck of playing cards, with every ‘scene’ appearing on an individual card. I used to keep the cards in my backpack for years, until airport security had to inspect the deck because the thick plastic casing triggered an alarm. They let me have the cards back, but told me to not fly with them again. Mystical, magical poems.

Q: Much of what I’ve seen of your work focuses on the form of the prose poem. How did you land on the prose poem? What do you feel the form allows or provides that might not be possible otherwise?

A: I’ve always loved short stories and microfictions, and discovering the prose poem (first through Richard Brautigan, and then Mathias Svalina) sent me down a rabbit hole of new literature and form. I love how the prose poem can blur the line between a coherent tale and a lyrical headspin. The prose poem allows me to be a storyteller without any set of rules. I don’t need an ending, or an arc, or a moral. The prose poem is a lawless box I love to call home.

A: Outside of the books previously mentioned, here are some that are always nearby:

Edward Mullany’s Figures for an Apocalypse. Full worlds packed into one/two sentence poems. Surreal and beautiful, and part of a trilogy that's great from start to finish.

Shivani Mehta’s Useful Information for the Soon-To-Be Beheaded. Some of the best prose poems I’ve ever read. Reshapes how I approach the blank page.

Matvei Yankelevich’s Boris by the Sea. One that always inspires me. The full version from Octopus Books, but also the handmade one-of-one version available digitally on Ugly Duckling Presse’s website.