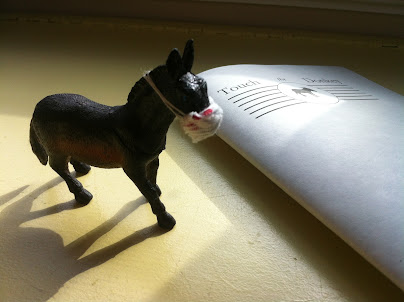 Yoyo Comay is a poet & musician from Toronto, Canada. He is currently working on a trilogy of long poems, the first of which is forthcoming from Vehicule Press in 2022, and is a founding member of the Toronto Experimental Translation Collective (TETC). He is also working on his debut album of original music.

His poems “habit is an atmosphere,” “this is ghost fishing” and “the world provides new metaphors for the body” appear in the thirty-first issue of Touch the Donkey.

Q: Tell me about the poems “habit is an atmosphere,” “this is ghost fishing” and “the world provides new metaphors for the body.”

A: These poems are all excerpted from a book-length poem called States of Emergency which will be coming out with Vehicule Press in 2022. This poem marked a new way of writing for me. Instead of sitting down to write a poem, which I had done in the past, but which often resulted in me just describing what I saw out of my window — tree, bird, cloud, bleh— I would write down lines, phrases, scraps of language as they came to me throughout the day. These would collect in a notebook and after a couple weeks I would stitch the fragments together into a chapter of this book. The result felt much truer to life, much closer to the texture of my experience. I stopped searching for “poetic” things to write about, and started collecting from everywhere — something I heard in a youtube video, or read in a biology textbook, a sensation I felt in my own body.

The content and language of these poems is representative of the book as a whole. I write from a pretty unconscious place. A phrase or word will pop into my head, and I’ll follow the language, the sounds of the words, and see how they unfold. It feels quite digestive, excretive, vomitous. I’m very frustrated by language, and I want to bring it as close as I can to the body, to moaning, to screaming, to the gut’s churning. I did have a pretty unsettled stomach when I was writing this poem, so I tried to see what words I could find in that roiling. I find the body and its breakdowns to be a very rich source of intuitive language.

A: I was writing a lot of these long poems, using the process I described. And then I took a break from writing for a while. Now I’m trying to figure out how to write short poems again, and I’ve been experimenting with rhyme, which I’ve always loved. I started writing songs long before I wrote poems, so I’ve been thinking about how to integrate the two practices, to make the poems more song-like, and the songs more like my poems. I’ve thought about writing more long poems, but it feels like I’d be repeating myself or like I’d know what I was doing. I don’t like knowing what I’m doing when I write a poem. It’s usually a good sign if I don’t know if a poem’s any good. What connects these new sing-song poems and the ones I’ve sent you is an attention to sound. Sound, the musicality of language, is always my first consideration when I’m writing a poem. Maybe consideration is the wrong word. I follow sound, write the sounds that feel like they want to be written, even if I don’t know what they mean. This gives me a sense of the poem’s rightness. It’s often not very considered at all, or at least not thought out before hand. I have a hard time writing a poem if I know what I want to talk about.

It has to be an act of discovery.

Q: Do you have any models for the kinds of work you’ve been attempting? What writers or works sit at the back of your head as you write?

A: I don’t really consciously model my work after anyone in particular, although I’m sure the people I read come through in my poems. Yeats is always an influence, especially in some of the more metrical and rhyming stuff that I’ve been working on lately. For the long poems, Octavio Paz’s poem “Sunstone” has been quite influential to me, and is something I return to once in a while. And then the language of the Old Testament comes through as well. Some Shakespeare. Boring, obvious stuff. I guess the through line might be pieces of writing that take on a kind of mythic, incantatory tone. I recently started reading a lot of Walt Whitman. He had no direct influence on the book, but now that I’m reading him I feel a kinship.

But if anyone sits in my head, then they must be in a different room, or at least I have my back turned to them. I prefer to write in private.

Q: How has the process been of putting together a debut collection? Have you been attempting to hone the best of what you’ve done up to this point, or had you a specific project in mind?

A: I had a specific project in mind, although what that project was came together as I was writing. Again, I don’t really like to write towards something, I don’t like to have any idea of what I’m going to say before I say it. So the project was more based on the method of writing than it was on any specific content that I wanted the book to have. The method involved writing down lines throughout the day and then stitching these lines into chapters after a couple weeks. Interesting juxtapositions and patterns emerged in this way, and there was an element of chance and randomness involved. Things were said that I didn’t intend to say. Its a kind of semiautomatic writing I guess, where the unconscious reveals itself very slowly. I found myself repeating things, leaning on the same images and metaphors again and again, which was very interesting.

Q: How have you seen your work shift, if at all, through the process of putting together your debut? Are you yet at the point where you can see something else your writing might attempt beyond this collection, over that horizon?

A: My process shifted a lot when writing this book. I was writing more formalist poems before, and the book is a turn away from that, an attempt to bring more of my life, and more of ugly parts, into my poetry.

I think I need to try something else now that I’ve experimented extensively with this long-poem form. I think I’d know too much what I’m doing. I want to feel like uneasy when I’m writing, unsure whether what I’m doing is any good at all. Doing the same thing feels a bit safe. I need to be on the verge of embarrassment. There’s a lot I want to attempt. Narrative. Returning to formalistic writing. Experimenting with handwriting, drawing. Different surfaces.

Q: Tell me about your experiments with the long-poem form. What brought you to the form, and what did you feel you needed to accomplish through the process that the short lyric, for example, wouldn’t have been able to provide?

A: I was brought to the form by accident. I started collected lines for poems throughout the day, with the idea that I would then use these lines as seeds to write complete, short lyric poems. Then as a typed these disparate, discontinuous lines together I liked how they read as a single poem. So then I just kept composing like this, writing down scraps on the fly and it turned into a book. The one thing I knew, though, was how the poem would end.

I think the long poem, as I’m writing it, gives a better picture of the flow of life, going under then suddenly coming up for air, blinking the world into fragments. It felt closer to the way I was experiencing things. That being said, this long poem isn’t narrative or epic really. I’ve thought of it like this: a poetry collection is usually like a series of ponds. But this one is more like a river. That doesn’t mean you have to get in at the beginning and ride it to the end. You can jump in wherever and take a dip, feel the rush of the water going by. I think you could read it like a normal collection of poems. Or its like a social media newsfeed. Come have a snack, or glut yourself insensate. Your choice. Here I’ve given you some extracts from States of Emergency, and I think they work as stand alone poems as well.

A: I return to Paul Celan all the time, but I can’t read too much of him or else I’ll start to copy him. The gravity of that style can be too strong sometimes. I like to reread Octavio Paz’s long poem “Sunstone” once in a while, and I’m often surprised by how much of it has seeped into my poetry over the years. At the moment I’m thinking quite a bit about Emily Dickinson, Stevie Smith, WB Yeats. Poets who use rhyme and seemingly light-verse forms but have a dark and powerful undercurrent running through them. I’d like to write poems that get stuck in your head. I love the way that song lyrics can suddenly pop up in your mind and have almost epiphanic significance in the context of a new experience. I think rhyme and meter can give the reader a way to live with a poem over time, to keep it with them. And then what may at first appear opaque can slowly unfold, over the course of many years, or even a lifetime.

“Reenergize” is an interesting word to use. I sometimes feel more energized not by poetry but by pieces of writing that have totally different vocabularies than the ones I’m used to. I was taking an evolutionary biology course while I wrote my first book States of Emergency, and a lot of the unusual language that I found in the textbook for the course made its way into the poem. That experience was exciting to me, and I plan on mining other disciplines for new phrases and words in the future.