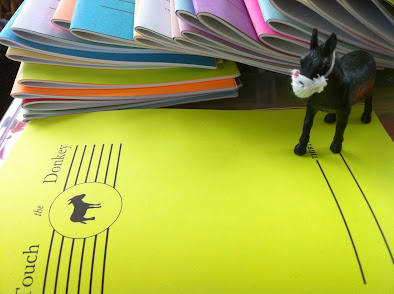 Amanda Auerbach is a poet and literary critic. Her book What Need Have We For Such as We was published by C&R Press in 2019, and her poems have also appeared in the Paris Review, Kenyon Review, Fence, and Conjunctions.

Her poems “Riverdale City, IA,” “Fantasy Fantasies,” “Fitted Sweater” and “In-Voice” appear in the thirtieth issue of Touch the Donkey.

A: The first one I wrote in this couplet style was “Fantasy Fantasies,” in the summer of 2018. It was written in the glow of starting to psychoanalyze myself in certain prose poems I had started to write (not published here). All of these couplet poems gave me the feeling of spinning out a single, super slight or even trivial impression as far as it would go, with the couplet feeling relatively effortless and punchy. I enjoyed exploring how impressions beget different kinds of speakers. A speaker, for instance, defined by the after-impression of wearing her hair in a clip to work out or a speaker tethered to the after-impression of saying, in teaching Frankenstein, “The creature is created.” I enjoyed playing with the stereotypical idea of a woman as someone who cares a whole lot about trivial things – what would that look like if it were true?

Q: How do these poems compare to some of the other writing you’ve been doing lately?

A: I’ve mostly been writing flash fiction lately. Poems often depend on emotional urgency, and I appreciate fiction as a break from that. The artificial-feeling formal constraints like the couplets can also help me escape from the personal or cultural emotion-driven poem. I just kind of keep an eye out for the kinds of experiences or emotions that would best translate into the kind of form I’ve decided to work with.

A: There is that Wordsworthian way of looking at things, of the lyric as an instance of being gripped by overpowering emotion. But it’s also the fact that the lyric asks for a certain kind of attention to each word that fiction doesn’t ask for and kind of breaks the silence, disturbs the universe. Fiction doesn’t have quite the same pressure. There is this default of people who want to curl up with a book or want to be entertained, participate in a fictional consciousness. I’m a poet who likes reading poetry books, but even then it feels like a commitment. I’ll keep reading books of poetry and enjoy them once I do, but I’m lazy so I’d rather lay around and read a novel. Also there’s the fact that I write in third-person for fiction, so the consciousness I narrate isn’t making any kind of claim for attention.

Q: Do you have any models for the kinds of work you’ve been attempting? What writers or works are in the back of your head as you work?

A: I don’t really have models in mind, though when it comes to fiction-writing it feels like all kinds of things become relevant. I have been teaching a course on the Bronte sisters, so perhaps them especially.

Q: Do you approach the individual poem any differently since the publication of your first full-length collection?

A: That’s a good question – I definitely do! I think on the level of the larger project and kinds of experiences are relevant to that. The first book for me was partly about becoming a poet, but then future books (I have two more manuscripts of poems, one for each year at Iowa) have different subjects and forms that go with them. These poems published in Touch the Donkey come from a larger project oriented around self-analysis, going to therapy in an extended way for the first time, living alone for the first time.

Q: Given all of that, how do you feel your work has progressed since you began publishing? Where do you see your work headed?

A: I see myself mostly writing fiction for a little while and editing what I’ve written and trying to get it published. I wrote a poem the other day, which was the first poem I’ve written in almost a year, and then I wrote another one that was actually good/ actually a real poem. So maybe what I’m wanting to do is find a slower pace for writing poetry. I think that will make writing a poem feel more special. Perhaps trying to write a poem once a week is a good plan, just to stay in the practice.

A: There is nothing regular, though I have to say that Dorothea Lasky always makes me want to write by tricking me into thinking that it will be easy. The last thing I read, which energized me to write, is the first few pages of DuMaurier’s Rebecca, that disembodied voice that is more potent than a person.